Songs for the Fallen 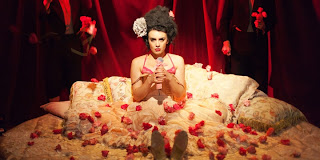 Critical Stages and Michael Sieders present SONGS FOR THE FALLEN by Sheridan Harbridge in the Reginald Theatre, Seymour Centre.

SONGS FOR THE FALLEN is a new work written by Sheridan Harbridge for herself and two other actors, Ben Gerrard, Garth Holcombe and a composer/live musical performer Basil Hogios. This presentation is the beginning of a tour for Critical Stages and Michael Sieders, mounted after a successful first outing at the Old Fitzroy, last year.

Harbridge describes SONGS FOR THE FALLEN as "part vaudeville, part punk opera, part MTV-does- Baroque", a pastiche, using the life history of an actual historical figure, a "fallen". Born in 1824 as Alphonsine Plessis she became a young woman of famous beauty who found her way in life as Marie DuPleiss, a member of a legendary part of the Parisian world - the demi-monde - a courtesan, of the 1840's. She began as a mistress, at the age of 16, to a restaurant owner and was set up in a small apartment, before quickly attracting the attention of a 19 year old, Antoine Agenor, Duc de Guiche,who possessing a fortune was determined to be the reigning dandy and the greatest authority on all the beautiful women of his time, subsequently provided Marie with a truly grand apartment, and educated her to become one of the leading figures of that world. Besides her remarkable beauty she became renowned for her educated conversation, her wit, her courage. She was admired, loved, and toasted. On his enforced abandonment of her (by his concerned father) she lived with the aging Comte de Stackleberg, a former Russian Ambassador, who permitted her as many lovers as she pleased - Alexandre Dumas (fils); Frantz Liszt; the Comte de Perregaux (who actually married her in a civil ceremony in London, which it appears, had no legal standing in France) being among them. She was suffering from consumption and gradually had to sell off her possessions and pale and emaciated, dying in her bed, alone, on February 3, 1847, at the height of the pre-Lenten Carnival, when the rest of Paris was dancing in the streets. "She had lived a full life, spent about half a million gold francs, and had a hundred lovers. She was twenty two years old."

What is remarkable about SONGS FOR THE FALLEN is the serious engagement and respect for the facts of Marie Plessis' history that the author, Sheridan Harbridge, has given to her principal character, for in this invention the text is a rambunctious, noisy musical explosion of the normal storytelling. This story was famously told by Alexandre Dumas (fils) in 1848, in his highly successful novel LA DAME AUX CAMELLIAS, later adapted, by him, as a play, of the same title (1852), a melodrama of great tenderness - Marie and all the other historic figures fictionalised to protect those living survivors, their reputations (!), she becoming Marguerite Gautier, the Lady of the Camellias. It became the foundation for Verdi's opera LA TRAVIATA (1853), name change to Violetta. Famously, 20 film versions have been made, including, of what I believe to be one of the great screen performances ever, that of Greta Garbo in the George Cukor version, CAMILLE in 1936 for MGM. Isabelle Huppert, also, has given the role in a 1981 French film. In Australian creative terms Baz Luhrmann's MOULIN ROUGE! took some inspiration from the original source.

(N.B. LA DAME AUX CAMELLIAS contains not only the sentimentality that was the dramatic taste of its time, but does provide some elements of social criticism, especially about the role of women, elements which were to resurface in the plays of Ibsen and the Lulu Plays of Wedekind. As I mentioned in my blog on MRS WARREN'S PROFESSSION, Pam Gems rewrote it with an even stronger feminist (I prefer,'femalist') slant in CAMILLE (1984).)

Taking in this work by Ms Harbridge, then, one can see the breadth of her inspirational sources and the nearsome comparison would have to be the Luhrmann effort, MOULIN ROUGE!. This work, hemmed in with red curtains, has short kaleidoscopic scenes, announced on a vaudeville easel with painted title boards, and numbered amusingly, drolly, over a microphone by our narrator, Garth Holcombe - who, also among other things, plays Dumas (fils) in the scheme of the story telling ; it has a fourth wall breaking format of the vaudeville traditions, with even, transgressive invasions into the auditorium; it has a self aware, sometimes, self-deprecating text, Ms Harbridge as Marie tells us from the start that she will be dead at the end, but this is a comedy !, she also explains, amongst other digressions during the performance, the possibility of her variation of accuracy with the French accent and why; and it covers, in the playing, a wide emotional range from vulgar low comedy to sophisticated word play to rousing musical ballads to raucous and outrageously frenetic song and dance routines, to great moments of pathos, daringly created and executed throughout, and ultimately transported for us into a delicately played melodrama of a death bed scene of some truthful telling.

This is a post-modern deconstruction, of this true story and from other 'straighter' literary sources, that remains divinely respectful, and it works marvellously. It is not a story of prostitution or sex, no such judgement is given, it is, perhaps, a more than cautionary tale of the corrupting hedonism that money and power can deliver. Maybe, a tale not unnecessary in this age of celebrity and celebrations. (Just how many festivals can we take, without a negative costing?)

Director, Shane Anthony, has harnessed all the creative impulses of Ms Harbridge's text and corralled a collection of inspired collaborators. Michael Hankin with his Set Design has created a red curtained vaudevillian proscenium arch and stuffed the stage with a circular bed and all the necessary props (feathers and glitter galore) and costumes, signage and musical equipment it can hold (maybe the design set down too close to the audience for good sight lines in this terribly raked seating arrangement, in this theatre?) . No-one leaves the stage and all costume changes occur in view and, here stylistically, too, anachronistic contemporary approximations and 'cartooning' occurs. All, in the mayhem of the speed of the work, become breathlessly accepted. This element, in the number of changes and the swiftness of them, is a minor miracle of design and invention by Lisa Mimmocchi. Lighting by Teegan Lee is all created with the wildness of the task and certainly the "great party'' scene is the highlight of the work.

Ms Harbridge, in the central role of Marie, is astounding. Her comic timing, her shifts from the written text to vaudevillian improvisation with her audience, her shifts into resonating truthfulness in the great dramatic moments and almost instantaneous turn back to clown, now, in the time of the story - late 1840's - now in the present moment of performing in the Reginald Theatre with us - 2013 - is further compounded with a musical voice of such purity and expressive range that one undoubtedly feels here is, what sometimes, oh, too rarely one sees on Australian stages, a genuine triple threat: an actor, a singer and a mover/dancer. I have watched this actor grow over the past few years and her self developed (and self-financed) work has given her the gradual refining into an amazing expression of passionate talent - writer/actor par excellence, remarkable (see also SLOWBOAT TO CHINAMANS; and AN OFFICER AND A GENTLEMAN).

But, beside her are two generous and gifted young actors, Ben Gerrard and Garth Holcombe. Mr Gerrard has a whole collection of characters, both male and female, and is also remarkable. His focus, his committed demeanor, never, for one-second losing the veracity of the character or the world that it exists in, no matter what Ms Harbridge may have lobbed him, comedically and empathetically supports Ms Harbridge in the trajectory of the story. His observations of comic 'types' are executed with refined aplomb,  great, tidy economy and taut accuracy - a true sense of the comic necessity of the importance of being earnest. There is no flubby 'near enough is good enough' here - it is perfect emphasis and craft. Mr Holcombe has the more difficult tasks of narrator and a collection of characters that are necessary spinal support to the narrative and need a restrained composure of execution which he gives despite, probably, awful temptations to join in some more of the craziness than he is already permitted with his fellow ebullient creators - he stays magnificently steady - this is work of a highly disciplined and generous performer.

Basil Hogios is the Composer and Sound Designer of this illusion of anarchic work. The background support with live sound is a subtle and necessary ingredient to the work - it helps in creating the appearance of anarchism, but, is, undoubtedly, deftly orchestrated. The songs composed for Ms Harbridge's voice are beautiful, and it is here that more refinement/development could take place. There felt sometimes in the arc of the piece not enough variation of tempo and length to the songs. The ballads do not, seemingly, move the piece forward enough, rather, invites us to dwell too long with the singer (not always the character) without enough import - one got impatient with the relative rambling through the time of the songs. The songs for the fallen were not dynamically diverse or arresting in story terms, however much the glorious singing voice of Ms Harbridge was revealed to us.

SONGS FOR THE FALLEN is only just over an hour long and it has the exhilarating impact of a densely packed experience covering a great range of performance styles and empathetic narrative: comic, musical and dramatic. It raises Sheridan Harbridge's gifts as a writer to some further expectation of excitement. What next? Certainly, it gives her profile as a significant  performer - she is sensational. Everybody involved in the creating of this independent production deserve deep appreciation. Have I credited the director, Shane Anthony, enough? Probably not. Congratulations, sir. What next?