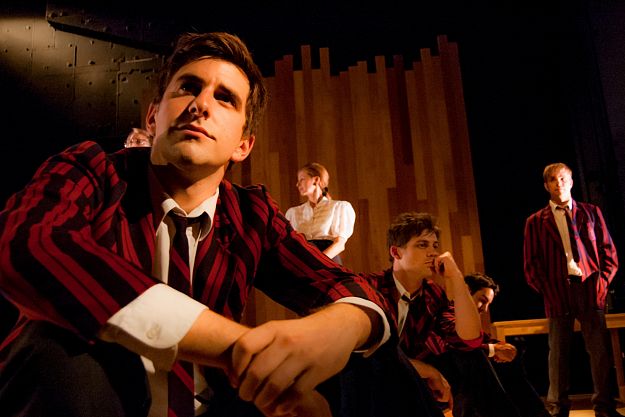 Peach Theatre Company presents THE HISTORY BOYS - A Comedy by Alan Bennett in the Playhouse at the Sydney Opera House.

THE HISTORY BOYS by Alan Bennett is, I reckon, already - it was only first presented in 2004 - a modern classic. The National Theatre of Great Britain toured it's premiere production to Sydney in 2005 (or, 06?) at the Sydney Theatre. It was a lavishly designed work with video whizz-bangery and more, designed by Bob Crowley, directed by Nicholas Hytner. The company of actors had been playing it for months and months, into years, I think, in repertory and around the world. They went on to film it (2006). The actors were wonderfully relaxed and deeply possessed by the life knowledge and forces of their characters. The production of the play was funny, wise and moving. Impressive.

In this new incarnation at the Playhouse, in The Sydney Opera House, in a most modest and simple design by Emily O'Hara and fresh new cast directed by a young Jesse Peach, this play-production justifies all of the above prize winning. It is the stellar writing that this company uses to support and carry the day. This production of the play is funny, wise and moving, too.

Mr Bennett beginning as far back as 1960 came to notice with a Stage Revue called BEYOND THE FRINGE, and since, as had a remarkable literary career as a book writer, a writer for television and film and for the theatre - HABEUS CORPUS (1973) - presented by the Old Tote Theatre Company back then - along with THE MADNESS OF GEORGE III (1991) and THE HABIT OF ART (2009) and the latest, PEOPLE (2012) being some of the continuation of a very prolific output.

This play is set in the 'battlefields' of the adolescent classroom as we see some of its advantaged 'soldiers' prepare for the Oxbridge candidature sometime in the early 1980's. Intellectual competition, and sexual discoveries and adventures reveal themselves in various ways amongst the boys. Comedy, drama, pathos and musical theatre, direct monologues to the audience are all wonderfully employed by Mr Bennett, as three of the teachers: Hector (John Wood), Mrs Lintott (Heather Mitchell) and Irwin (James Mackay) wrestle in their individual ways to prepare the boys. The Headmaster (Paul Goddard) insists that the boys join the Thatcher regime's demand for a Result Culture and we see the education of the boys shifting from one where presentation of ideas is preferable to substance. It is a clash of philosophical fundamentals where one view is that "exams are the enemy of education" and the other that education should be aimed to pass the exams, in whatever way necessary. It is not what you know but how you show it.

But this play is about much more than that and history and poetry are discussed in witty philosophical tussles: "History is just one fucking thing after another." "History is the commentary on the various and continuing incapabilities of men. History is women following along behind with a bucket." There is no real wastage of dialogue here, everything thrusts the play forward and it is the literary and form dexterity of Mr Bennett that is so thrilling. For the audience cannot ever rest, it must chase and attempt to keep up with the twists and turns of the high culture poets and popular musical and film entertainment quotations, political argument, writing genre style surprises, and character emotional ups and downs. This text demands the best of its audience, it must be alert and those who are alert are wonderfully rewarded.

This company of actors do find the nuanced clues to give to us to use to play with them. James Mackay, as Irwin, begins the play in a commanding and no nonsense manner and sets the tone for our attention - a very focused performance. Ms Mitchell delivers Ms Lintott with wry humour and empathy,Mr Goddard avoids the cliche of the Headmaster, while Mr Wood, tends to struggle with the text and grabs the emotional opportunities to cover some befuddlements, it is well done and he is nicely supported by the other actors around him. The collective of the boys Caleb Alloway (Lockwood), Simon Brook McLachlan (Crowther), Gary Brun (Rudge), James Elliott (Akthar), Aaron Tsindos (Scripps) and; especially the jokey Timms, played by Matt Hardie; the obsequious, sexually conniving, bright Dakin - Lindsay Farris; the religious and sexual 'other', Posner, played (and sung) by Matthew Backer, all give the play the taut concentrations and economy of clear character edits to achieve this. Their timing and rapport is admirable.

The Costumes by Tim Chappel, capture the feel of the classroom with all of its smells and wears - memories were aroused viscerally. The lighting design by Matthew Marshall went a long way as a succinct collaborator in driving the physical and emotional tensions of the text and its stylisations of direction, forward. Not just decorative but an active guide to our focus.

The smarts that MRS WARREN'S PROFESSION elicited from me, were further exercised with this production of THE HISTORY BOYS. Further proof, for me, that everybody concerned with the creative experience of the live theatre event, and that includes us the audience, prosper when the writer is good at his craft. It all begins and depends on the quality of the writing. Alan Bennett is one of the contemporary best. Great to see again. A stimulating time - recommended.