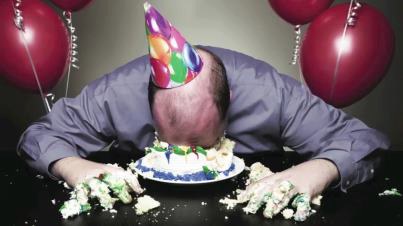 IT'S MY PARTY (AND I'LL DIE IF I WANT TO) is the first full length play by Elizabeth Coleman, written in 1993. SECRET BRIDESMAIDS BUSINESS - 1999, is her second and more famous work. It was a box office splash and made into a TV movie in 2002.

IT'S MY PARTY (AND I'LL DIE IF I WANT TO) concerns Ron Patterson (Henri Szeps) who has had a premonition and announces, in a prologue to the play proper, that he is going to die in 111 minutes. He has invited his family: wife, Dawn (Robyn Arthur); son, Michael (Trent Baker); eldest daughter, Debbie (Sharon Davis); and the youngest of the siblings, Karen (Freya Pragt) to a farewell meeting to spend his remaining time as a quality time for them. Ron has been a self centred manipulative patriarchal figure, full of the stereotypical bourgeois prejudices of his middle class generation (an Aussie,  milder, Alf Garnet, perhaps?), and as he attempts to organise this 'quality time', the truths of the family tensions explode uncontrollably about him. He gets and learns more than he ever planned for. This is further compounded when the Funeral Arranger, Ted Wilkins (Matt Furlani), whom Ron has organised, arrives early.

This is a broad middle-of-the-road comedy of manners with classic stereotypes and situations and it is also robustly funny. What is interesting is Ms Coleman's use of the final ritual of life, death, as a source of comedy. The final 20 minutes are outrageously, daringly handled by Ms Coleman. Joe Orton would be pleased with the comic macabre of it (Think, LOOT). Certainly, Alan Ayckbourn and some of his comedy at its darkest is summoned to mind. The audience, I sat with, was constantly amused and sympathetic to the end.

Dennis Moore has directed it with a confident hand, having the actors play for the comedy style, with believable, if not necessarily truthful anchorings. I enjoyed the work of Ms Arthur and especially Mr Baker. The set design of Shaun Gurton, which has an enlarged black and white photograph of a suburban brick bungalow as the backdrop to the domestic dining room space, works wonderfully. The costumes (Adrienne Chisholm) are simple and best because they are unremarkable, simply, the clothes that these people would wear - gently indicating the character with well selected 'dress' characteristics.

This is, mostly, a recognisable TV sit-com that tantalisingly shifts gear to a more arresting comic world, in the end.

It is a goodnight out.
Posted by Editor at 8:55 PM