One Scientific Mystery or Why Did the Aborigines Eat Captain Cook? 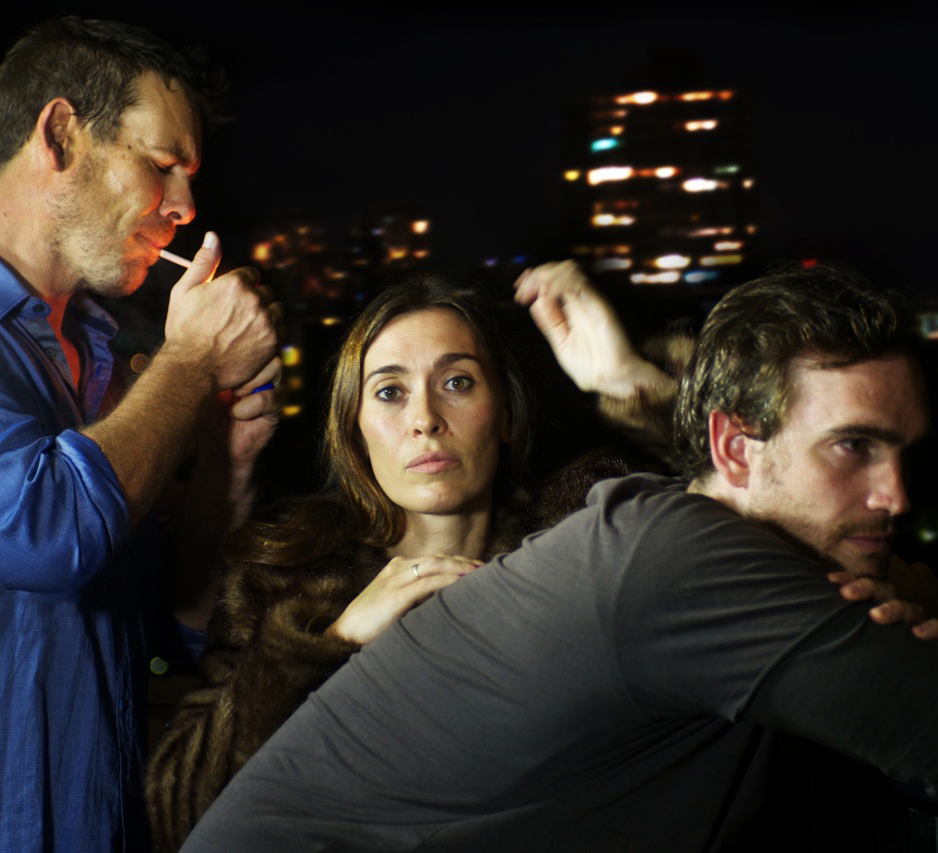 VHS Productions presents ONE SCIENTIFIC MYSTERY OR WHY DID THE ABORIGINES EAT CAPTAIN COOK? by Victoria Haralabidou at the TAP Gallery, Darlinghurst.

ONE SCIENTIFIC MYSTERY OR WHY DID THE ABORIGINES EAT CAPTAIN COOK? is the debut play of Victoria Haralabidou. This new Australian play was selected for the 2012 National Play Festival in Melbourne.

Set in contemporary St.Petersburg we find a young woman, Doosia (Victoria Haralabidou) naked and preparing to jump out of a window of an apartment into the snowy winter night. This apartment is occupied by two Australians. Rhys (Aaron Jeffery), returning home finds this stranger and prevents her inclination. He discovers his fellow Australian, Ben (Dallas Bigelow), nearly naked in an unconscious stupor. While helping Ben recover, Doosia and Rhys begin a conversation of revelations drinking coffee, red wine, vodka and tea with clumps of bread. The two, unconsciously seek and find, through the climatic and moral fug, their damaged humaness, in a world dominated by money, sex and alcohol - surrounded by a land of physical brutality and fear.

This text is fabulously naturalistic in its minutia, and dares to seemingly ramble on and on about nothing, literally, conversations about nothings, in varying cyclic rhythms and volume controls. It is, of course, the language patterns over this ninety minute one act play that reveal the mesmerising writer's intent and cleverness. Sometimes the talking gradually peters out to stark silences. Silences. Lengthy silences. But, loud with inner turmoil: angry, despairing, but yet not extinguished. The characters groping for comforting signs of light and life from each other - fellow strangers.

This tiny theatre has seats on three sides, surrounding a starkly depressed dining/kitchen space with 'crummy' furnishings, with rooms situated off stage on either side of the audience - action takes place out there as well. This design by Antoinette Barbouttis makes the best use of this space that I have ever experienced here. The lighting is low, almost just the wattage bulb of the real central lamp, creating states of light and semi-darkness - naturalistic glooms and struggling impoverished yellow colours contrasted with a window permanently lit in a kind of midnight blue blackness and moving patterns of falling snow. It is directed by Iain Sinclair, his steady visual control guides his two principal actors through the text and their interactions with startling naturalness.

Ms Haralabidou (also, the writer) is hauntingly hypnotic in her physical and vocal creation. Speaking in English and Russian there is a fearless striving for ultra reality. It is a very striking performance, wholly possessing every detail. Mr Jeffery, returning to the stage after a hugely successful television bout of work, matches Ms Haralabidou moment by moment, who, as Rhys, takes us on a spiralling trajectory of bewildering grief and despair to a place of transcendant sadness. His physical scale is dominating, powerfully attractive, and, yet delicate in its inner radiating fragility, its breathing pain. These two performances have depth, maturity and a lacerating control and are played beautifully, like two instrumentalists in concert duet. There seems to be a palpable trust of safety and challenge going on between them. Mr Bigelow gives useful support to the scenario, if, not as yet fully realising the potential of the role. The resolution to the play is enhanced by its realistic restraint - no sentimental choices here, but, still one of warming fortitudes and hope (I was reminded of the writing of Vassily Sigarev: PLASTICINE (2002), BLACK MILK (2003) and LADYBIRD(2004)).

This is a very sophisticated piece of writing, supported by wonderful acting, directed with a theatrical sureness, and, even within the modesty of the production values, and the space itself, a production I recommend highly. This play, ONE SCIENTIFIC MYSTERY OR WHY DID THE ABORIGINES EAT CAPTAIN COOK ?, introduced in Melbourne at the National Play Festival last year, I am surprised that it was not curated for principal theatre production. This is a debut play of some accomplishment, as performed by this company. (The title is provoking, one way or another, isn't it? - and I'll let you plumb, and discover, its meaning.)