The Motherf**cker With The Hat 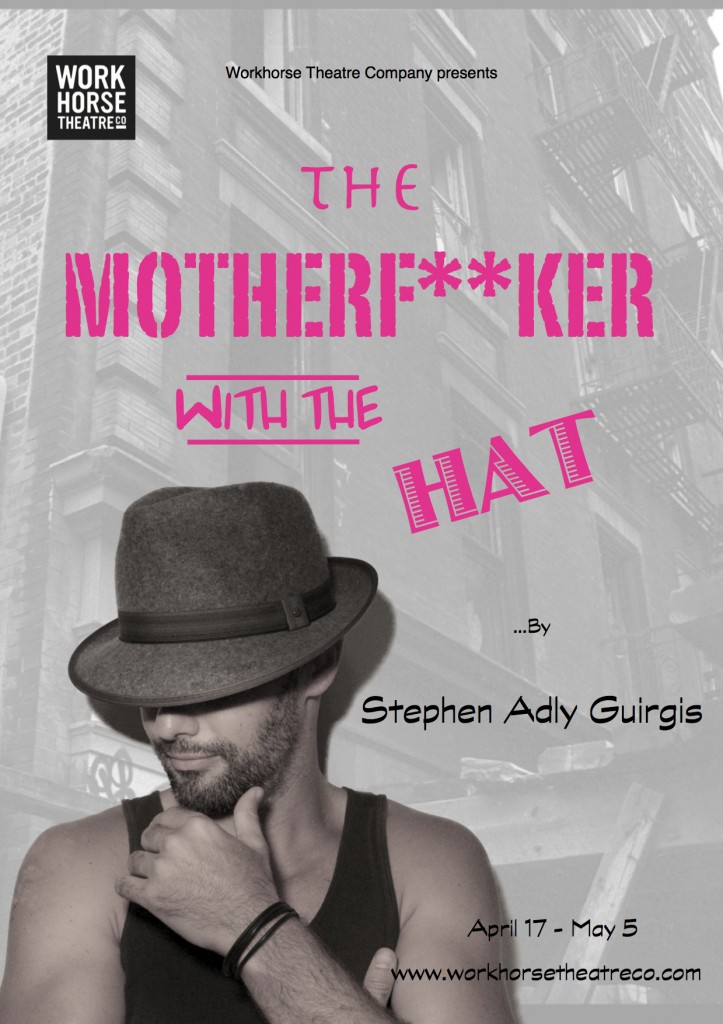 Workhorse Theatre Company presents the Sydney Premiere of THE MOTHERF**KER WITH THE HAT by Stephen Adly Guirgis at the Tap Gallery, Darlinghurst.

THE MOTHERF**CKER WITH THE HAT by Stephen Adly Guirgis directed by Adam Cook at the fringe venue, the Tap Gallery, is a terrific night in the theatre. Following on from the recent ONE SCIENTIFIC MYSTERY OR WHY DID THE ABORIGINES EAT CAPTAIN COOK? the Tap Gallery - a really quirky space - is suddenly the place to see some really good theatre. I highly recommend it to you.

What is amazing is that this young Independent theatre company: Workhorse Theatre Company, have secured the rights to this recent Broadway hit play (2011), written by one of the most exciting writers around, Stephen Adly Guirgis.

What is this? The Sydney Theatre Company (STC) and Belvoir not have it on their radar?

This is not, however, the first play we have seen from Mr Guirgis in Sydney: Belvoir did, in their Downstairs venue, a few years ago, curate a production of JESUS HOPPED THE 'A' TRAIN (2000), directed by Wayne Blair; and Tony Knight when he was running the Actors Course of Study at NIDA, found (he reads plays, as well!) and caused a student production of THE LAST DAYS OF JUDAS ISCARIOT (2006), directed by American, Mel Shapiro, to be. Both these plays, if you saw them, have prepared you well for the emotional linguistic roller coaster treasure of this experience. THE MOTHERF**ER ... however is even smoother ... cooler.

Further credit, to the enterprise of this young company, Workhorse, ought to be noted, that they have found Adam Cook, recently returned to Sydney after eight successful years running the South Australian Theatre Company (SATC), and engaged him to direct the project. What the STC and Belvoir had no work for Mr Cook? - peculiar. Odd, indeed. Workhorse have some astute artists at the helm it seems. Fingers on the pulse. It is a reward for us, that they do, I can assure you.

THE MOTHER F**CKER WITH THE HAT is a contemporary play dealing with five people in the deep end of addiction and recovery programs. This is an examination not just of the drug addiction of legal and illegal substances that one might pre-suppose, and, certainly, that is part of the issue at hand in this play, but, more daringly, its an examination of the contemporary disease of sex addiction. MOTHERF**CKER, like the recent film, SHAME by Steve McQueen, with Michael Fassbender and Carey Mulligan, addresses that dilemma, where the need for sex is confused and read as an expression of  love but may be nothing more than lust, where the thrust of the "dick" is the drive for the affirmation of being 'alive',  a kind of life, from both sides of the human animal dualism.

What is impressive about this play is the uncompromising humanity of the characters and the handling of the incidents of their lives. This play is a comedy for anyone but the trivial. It is a drama without the sugar coating of sentimentality. The text is rendered with warmth and humour presenting an astonishing vision of the endless human capacity to persevere - and to risk it all - in  the name of 'love', laying bare the infinite longings and inevitable weaknesses of the human heart and the corroding contemporary influences that lead to huge delusion in this brave 'new' world.

It is, also, one of the most robust language juggles of contemporary vernacular and street talk you will have heard for some time. It sounds culturally and ethnically spot-on accurate and is 'poetry' of a flowing kind that everybody from the street rap-hipsters to the most articulate audience will be thrilled by, rejoice in. An oral torrent of contemporary references in sparkling, surprisingly juxtaposed witticisms and musicalities that are an electrifying jolt, stimulating joy of theatre writing, at its best. Remember the startling slam we had with the arrival of Mr Mamet in the 1980's: GLENGARRY GLEN ROSS? Well, here is the latest and newest blast from the US. It is so spot on, that quoting it may be too 'hot' a controversy - so said the New York Times reviewer - ha, ha. In Australian terms, Lachlan Philpott, is the nearest playwright poet in recent Australian writing that I can make some qualitative allusion too, to compare: COLDER; SILENT DISCO; TRUCK STOP - different, but just as smart and devastatingly accurate.

Jackie (Troy Harrison) is just out of prison, involved in a program of recovery from addiction, under the watchful eye of his sponsor, Ralph D (John Atkinson) and cared tangentially by Victoria, (Megan O'Connell), Ralph's wife. The principal problem for Jackie is that he is in love with and having a full-on relationship with Veronica (Zoe Trilsbach), a still hard hitting 'live' addict, and, in his conflicted dilemma seeks help from a cousin, a childhood friend, Cousin Julio (Nigel Turner-Carroll), who tells him that he both hates and loves him. The play, as David Carr in a New York Times article (June, 2011) observes,  is one that Mr Guirgis "saw addiction and its discontents as a good prism to observe people in extremis" and that the recovery program might be perfect as a construct to aid, but that the people in it, maybe not be quite so much - the tragedy of being an animal with a consciousness, having the aspirations of the angel but the needs of the animal. Big Time.

Mr Cook has taken great care in assisting his company of actors through the obstacles of the demands of the text. He has, sensibly, insisted that the particular dialect be observed - and, this certainly delivers the text in top gear for musical affect, and, thus impact (Dialect Coach, Jonathan Mill). He has also encouraged the actors to the 'latin'-like temperatures of the ethnic culture of these characters and the energy histrionics, the sexual power, pays off in that audacity and its consistency (I reckon a further 10% ratchet up would even be better). This production works particularly well in this tight space and the force of the explosive and virile collection of humanity pushes at the audience in a very visceral way - the temperature and humidity rises as the night goes on. The three set locations are as realistic as the modest budget of this company can make them be, designed with quick shorthand clues of difference, by Dylan James Tonkin, in scene changes tightly drilled by Mr Cook. The lighting is efficient (Kim Straatemeier) and the sound (Marty Hailey) maintains the sensibility of the work and keeps it afloat in those scene changes. There is no interval and the growing momentum of the story, with all the volatile twists and surprises of the work, benefits from that. There is no let off.

Mr Harrison as Jackie is a powerhouse of concentration and detail, movingly driven to disaters; Mr Atkinson, as Ralph D the focused sponsor but flawed man, grows in dimension as the play unravels; while Mr Turner-Carroll as Cousin Julio, following up on his recent work in THE GREENING OF GRACE at the Darlinghurst Theatre, balances an outrageously comic-serious creation by Mr Guirgis with delicate and sophisticated finesse. Ms Trilsbach, as Veronica draws a fine arc of struggling humanity and leaves one caring and wondering of her future.

This is another sign of the growing quality and integrity of the fringe, Independent work we are seeing around the less interesting work of the two major players in town. Check out the LENNY BRUCE: 13 DAZE UN-DUG IN SYDNEY 1962 at the Bondi Pavilion, as well.

Welcome back to both Mr Guirgis and especially, Mr Cook.

Run, don't walk, to get to see this production or let your fingers do the walking, as they say. The Tap Gallery is small space and it is a short season. It is right across the road from 'our' new Darlinghurst Theatre in Palmer St. on the corner of Burton St.

P.S. There is, once again, no biography of the writer in this program. It is so consistent an omission in the Sydney Theatre scene that it appears almost, a policy. Shame. Even, more woeful in this instance, is that the inside credit page has all BUT the writer credited. Unbelievable. The writer in this city seems to get no recognition, no respect.