The Political Hearts of Children 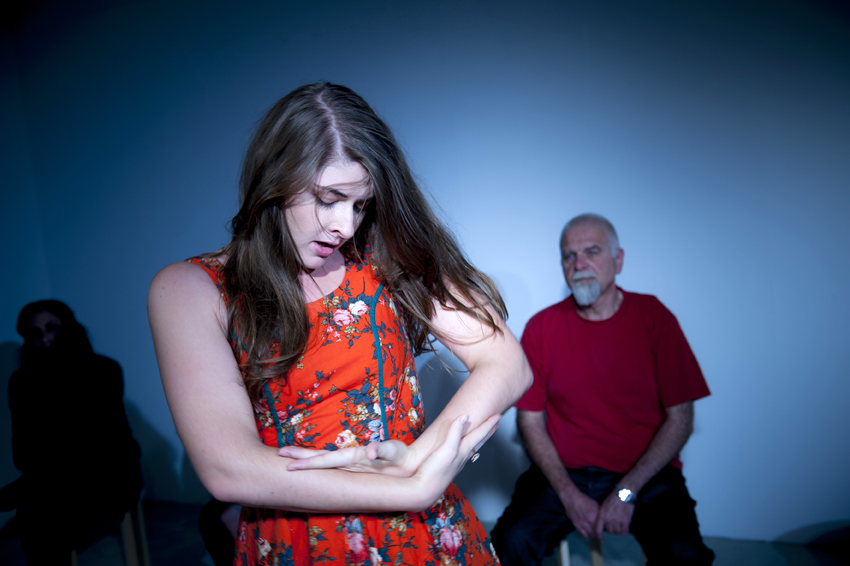 subtlenuance presents THE POLITICAL HEARTS OF CHILDREN at the Tap Gallery, Downstairs, Darlinghurst.

Paul Gilchrist and Daniela Giorgi are the founders of this company, subtlenuance. THE POLITICAL HEARTS OF CHILDREN is directed by Mr Gilchrist and produced by Ms Giorgi, and is made from the actors' own stories.This project began by gathering an ensemble of actors and then teaming them with a writer. The writer's guidelines were simple: take an anecdote from the actor's childhood and make it 'stage ready'. The possibilities were appetising.

In this art gallery space downstairs at Tap Gallery, the actors sit on chairs in a set of generalised lighting states, and tell the stories contrived by the writers from the actors intimacies of memory. The actors met and talked with the writers. The writers then went away and wrote a monologue based on those discussions and Mr Gilchrist has directed the actors singularly, and either let the pieces be monologue or be bits woven, entwined within each other. It is, generally, an easy experience, some more than others, given, that the monologue, is for me, a fairly tiresome genre. But, there is one really remarkable, totally engrossing, story. It struck me as to be a fairly interesting piece to observe and contrast with all the other efforts.

One of my definitions of what is an actor is simply: an actor is a storyteller. Watching this program I began to think about what is acting and what is storytelling.

James Balian has written his story and performs it himself. Mr Balian is an Armenian Australian, born in Iraq and came to Australia in 1969. His story is set in Baghdad during the coup led by Ahmed Hassan al-Bakr, deputised by Saddam Hussein, when he was a young boy. It tells of his emergency visit to a dentist during the actual coup and his childish awareness of the neighbourhood, family and personal 'adventures' during and after this time. It tells of the presence of soldiers in jeeps with brandished weapons, of 'disappearances' of people around him and finally his own family's escape, leaving all possessions behind, from this creeping and ever present fear, and arrival in Australia. Besides, the subject matter being so different from the other work it is told so matter-of-factly with such unemotional clarities and gently wry tangents that I was compelled to listen and became completely imaginatively immersed in its telling and its revelations.  Mr Balian does not give much impression of being an experienced actor but the telling was riveting. It was apparent that it was been spoken from a real experience. One could see the story through his communicated words with one's ears. It was vivid, one was held in a moving thraldom of concentration.  This was classic storytelling. It did not appear to be written or spoken with absolute certainty - it appeared to be partly, improvised, in the moment, within a very loose framework. Discovered in the evolution of the remembering, of having to think it out clearly. It resulted in an experience that all actors should aspire to: to have an audience still and focused in the progression, word by word, of the story.

In contrast the other work was, relatively, that of actors 'acting'. They were manipulating a scripted story, based around, maybe, a personal memory of their own, so kind of personalized, but structured, shaped by a writer, in language and syntax contrived by the writer, to whom the basis of the story is second hand. By the time of telling to this audience, the work we heard and saw was more or less technically recalled and played, twice removed from the original impulse, rehearsed such that it appeared more often than not, as 'acting'.  More or less proficient but standing beside the work of Mr Balian, pretended. Skilfully, but, transparently pretended.

Mr Dessaix had more sympatico truths than not is his story, but, not always - the actor sometimes overrode the storyteller. Mr Wilkinson had fun with his material, although not aided by its directorial breakup. Finally, however, it was the story content of the others that began to pall over the 90 minutes. We were being, mostly, entertained instead of reached with revelatory truths. The actual subject matter of their stories, hammered home, unconsciously, the safe, relaxed and comfortable life that they all had had as children. The political hearts of these children being so benign and painstakingly unchallenged and unchallenging - so self-centred in baths of recalled emotional banalities, structured in writing forms that had nothing truly arresting, or, adventurous in them to give us aesthetic arrest. Form and content being much too predictable.

For me, the title of the program, THE POLITICAL HEARTS OF CHILDREN was met only once, with the tale told by Mr Baldian.
Posted by Editor at 11:06 PM

I just love this review Kevin. As with all your writing, I felt I was in the theatre experiencing it. Thank you.