A Butcher of Distinction 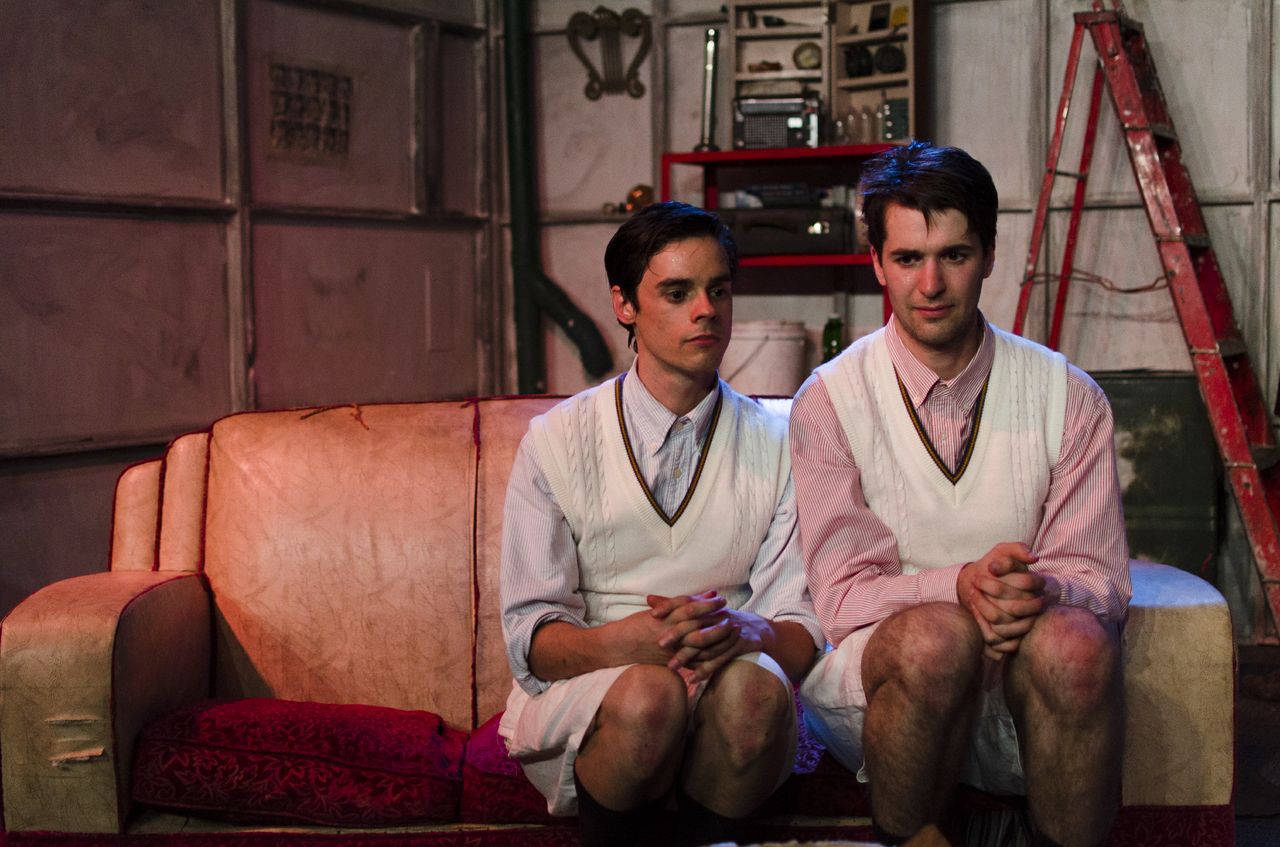 we do not happen presents A BUTCHER OF DISTINCTION by Rob Hayes at the Old 505 Theatre, Hibernian House, Elizabeth St. Central Railway.

A BUTCHER OF DISTINCTION is a little 'gem' of a darkling play (70 minutes, or so) by a young British writer, I do not know: Rob Hayes, and despite the Internet address, handily given in the very modern format of the program - which assumes that all their audience have Internet connect to be informed of the 'creatives' histories - it was not very helpful, to find out more. I did gather he is a prolific writer and gives (some) plays/sketches away for free and is not bad looking. James Dalton, the director, admires his work very much.

Two young boys, twins, Hartley, the ten minute elder (Heath Ivey-Law), and Hugo (Liam Nunan), have led a severely sheltered life on the country estate owned by their aristocratic father. Their quaint and limited behavioural patterns and language interactions, that we meet them with, are the result of that limited social upbringing. We meet them, not in the dynastic country heartland, but, in a decrepit basement, somewhere in contemporary London, dispersing belongings of their father, some of the inheritance left behind, after the murder and suicide of their parents, enacted by that father. This 'apartment' is decidedly unsavoury, a reason for dis-ease, wonderfully created by Set and Costume Designer, Dylan James Tonkin.

The amusing vocabulary and demarcation of status that that reveals between the boys is the cause of much empathetic laughter, even sympathetic laughter, from us, which is soon dispersed, with the intrusion of Teddy (Paul Hooper), a Dickensian-like miscreant, once an employee of the father, perhaps ,even, a 'business' partner. When a debt of an exorbitant amount, owed by their father, is demanded by Teddy, the boys without access to such funds, find that they can, will have to, repay it with the personal labour of a formidable kind. The boys, in their socially stunted way, gradually discern that their father has given them an 'inheritance' indeed, which they can repay Teddy with. They come to understand that this was their father's real inheritance, gift, intention, and they systematically carry it out in a Grand Guignol ending to the play - the title of the play is a clue!

Think, Mr Hayes' influences maybe: Harold Pinter, at his scary, tension gathering best, Joe Orton, at his aberrant sexual best, Martin MacDonagh, at his ironic, bestial, honest best, and a more frighteningly, contemporaneously sinister one, Philip Ridley (MERCURY FUR), at his relevant socially challenging best, and you will understand the world that you will be in. Whether this play, ultimately, successfully exposes, reveals the reality depths of a social horror that our contemporary world may have plummeted to, or, is simply an amusing hip-fable of the 'blood and gore' kind for the youth of our zombie/vampire obsessed world (curious, is it not?) is debatable. Whatever! ... It is, however, a good night in the theatre.

There are three expertly nuanced performances - the physical actions revealing the inner thoughts of the characters wonderfully, amusingly - by Mr Ivey-Law, Hooper, and especially, Nunan. Mr Nunan's subtle, truthful experiencing of this character's humiliating arc is truly, heartbreakingly disturbing. It is Directed by James Dalton, with a clear understanding of the type of play he is working with and, so, is highly disciplined and disciplining with his actors, with respect for the writer, to achieve that. As I have mentioned, the physical design, is terrific. The Sound and Music Design by James Brown, reminiscent of some Kubrick touches- suitably ominous and ironic - and a basic lighting plot, sufficient, given the space that Liam O'Keefe has to work in.

The journey to the Old 505 Theatre space, once you have found Hibernian House in Elizabeth Street, is, for the uninitiated, a suitable exercise of atmosphere, to prepare you for this play. A BUTCHER OF DISTINTCION  is a 'small' work, but it is done here with such affection and respect for the writing, that I can guarantee a worth while, if, light weight, maybe 'comic-hip' experience.

I cannot always guarantee such a recommendation. Do go!
Posted by Editor at 12:53 PM