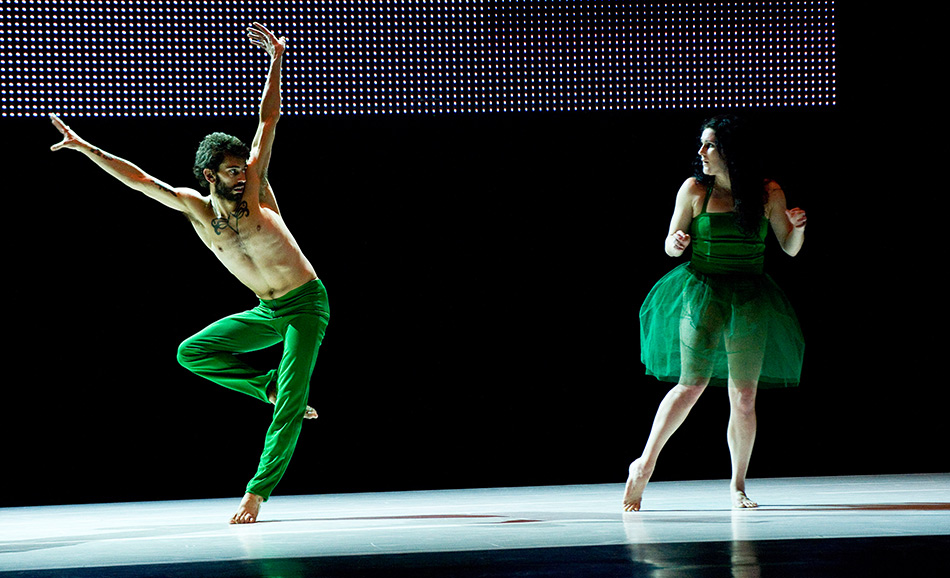 Garry Stewart with the dancers of the Australian Dance Theatre have created a work that looks at GISELLE - a ballet that sits along with SWAN LAKE at the pinnacle of the classical ballet canon of works. In 2000, Mr Stewart premiered BIRDBRAIN which was a deconstruction of SWAN LAKE and G is a similar enterprise. G premiered elsewhere several years ago. This was its (scandalously belated?) debut in Sydney. The work was commissioned by The Joyce Theatre's Stephen and Cathy Weinroth Fund for New Work (New York), Southbank Centre (London) and Merrigong Theatre Co. at Illawarra Performing Arts Centre (Wollongong). G has been produced by Theatre de la Ville (Paris).


GISELLE is referred as to as the HAMLET of the ballet. Among other things it encompasses sex, death, hysteria, gender, hierarchy, class and the supernatural ... Giselle exemplifies 'embodied vulnerability'.

The set design (Garry Stewart) is a wide open white horizontal space backed with a wide digital screen on which verbal clues to the intent and happenings of the work are communicated. The lighting is mostly of pure block, culturally spooky colour: green, red, purple, white, mirrored from the dance floor space and onto the huge digital screen.

The dancers, mostly, in forest green costume (Daniel Jaber and Gaelle Mellis), enter, from the audience point of view, from left to right, always, almost as if they were on a conveyor belt of a large manufacturing factory. The dancers incorporate every possible movement gesture: walking, running, skipping, to many classical dance steps and postures, contemporary physical complications - gymnastics - mostly manifested as solo bodies that, in the interpreting of what one sees, seem to embody contemporary body illustrations of the encompassing images of sex, death, hysteria (especially hysteria), madness, gender "battles", hierarchy, class and the supernatural. A body pinned and skewed by a large, gleaming medieval-looking sword is an image indelibly printed on my memory of this work. Embodied vulnerabilities, indeed.

The movement offers are relentless and superhuman in their dynamics and daring, egged on by the pumping and edgy composition by Luke Smiles / Motion Laboratories. The tempo of the dance shifts from calm to frantic and it never stops on that left to right direction. The hour length of the work is taxing for the athletic dancers and the grip on the audience's attention is fierce. The sheer energy of the ADT company, the lighting and the sound, demands participation from the audience that is visceral, confronting and overwhelmingly powerful. It is a communal relief when the work ceases, expires, stops.

The experience of the work is certainly impressive - its physicality and intellectual conceptions, telegraphed (kind of cryptically on the digital screen), engage us intensely, whether one has a knowledge of the work's source or not. The original GISELLE was, in 1841, regarded as revolutionary in its time, and Mr Stewart in his program notes says his aim in "approaching GISELLE and the classical paradigm in general is to continue the ongoing project of renegotiating the boundaries and expectations of dance". Beginning with his first work for the ADT, BIRDBRAIN, this work, G, continues that exploration, passionately.

Last year we saw BE YOUR SELF, a later work, chronologically in the ADT repertoire, and I was stunned by both the sophistication of the intellectual conceits that inspired that work and found the physical contribution of the dance a powerfully clarifying continuation of the source inspirations. Here, in G, the work's power is in its physical life and so for me a lesser, but still, exciting offer. This take on Giselle is a fascinating contrast to that of Fabulous Beast at the 2010 Sydney Festival, choreographed, created by Michael Deegan-Dolan.

Garry Stewart and The Australian Dance Theatre are a great contemporary force to be valued and reckoned with by any one interested in the theatre.