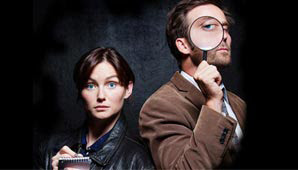 Dreamhouse Artists in association with NIDA Independent present SET - A WHO-DUNNIT SOAP-OPERA, directed by Sam Atwell in the Parade Studio, at the National Institute of Dramatic Arts (NIDA).

Channel 7 comes LIVE to the National Institute of Dramatic ART.

SET - a who-dunnit soap-opera, written by a team of writers from the Channel Seven, HOME AND AWAY, television series: Sam Atwell, Romina Accurso, Gary Sewell, Jenny Lewis and Louise Bowes, directed by Sam Atwell, as part of the NIDA curated season of the NIDA Independent Program, crashes onto a stage at the National Institute of Dramatic Art, for a three week season.

Sam Atwell in his Creator's Notes tells us:


When Nick Bolton asked me what kind of show I wanted to pitch to NIDA Independent Producer program, I responded with, "Let's do something ridiculously off the wall and fun." I have a huge love of television, especially crime shows and murder mysteries, and thought that would be a great place to start. So drawing on years of watching Poirot and Columbo, and working on television sets, I sat down and came up with a host of characters and a basic plot. ...


This he did. Though the stretch to find these characters and this plot was not much, given what we see and hear. While watching SET, the game, HOST A MURDER, came to mind, immediately, as the main source of plot. The stock characters had imaginative names like: 'Stumbles', Chip, Sizemore, Stella, Star. And, strangely I felt that, rather than loving television, the text, as performed, was an overlong jokey denigration of the medium and all the artists and craftsmen involved, and, that the disrespect for what actors do was so persistently satirised that it was a more than loud contemptuous example of disdain for their contribution to T.V. - it seems to say that they are talentless, vain, and stupid, perhaps, even addicts. "It's meant to be funny" , I hear the writers say. Well, you know what? - speaking as a watcher of television and loving actors and their craft, it was not. After a certain point, at the third or fourth 'joke' - which maybe a minute into this near one hundred minute play, it was no longer funny. NOT, funny. (If ever it was.)

Channel 7 and NIDA ought to look at what they have, so enthusiastically, supported. Channel 7 - a  full on joke abou the banality of television. NIDA - a humiliation of actors as talentless and vain individuals.

"SET the play would not be possible without the help of these people: 25 years of HOME & AWAY. Executive Producer Andrew Everingham for always being there. NIDA: Skye Kunstelj and Johanna Mulholland etc, etc ... .... ."

NIDA says in the program to this production:


In 2012, NIDA looked to broaden its vision and develop a program to provide greater opportunities for artists/companies (both emerging and established) to extend their theatre practice and develop new works and theatre forms. The NIDA Independent Program is open to the exploration of new work and creative forms, as well as the re-invention of classic and contemporary works.


Now this is good, usual, corporate speak, and certainly looks the right thing to be saying. Boards and Funding Bodies would be pleased with such statements, but, don't you think the DOING, the rehearsal progress, the resultant production, should be more rigorously examined?  That the artistic directors know what they are supporting as "extensions" and "developments" of theatre practice?  I'd say, "yes", to both questions, if this work and the recent, I KNOW THERE'S A LOT OF NOISE OUTSIDE BUT YOU HAVE TO CLOSE YOUR EYES are the standard of work that one is presenting. If you are going to "talk the talk", and have board and funding bodies support, don't you think that you should "walk the walk" and follow up with SEEING  and vetting more assiduously the quality of the work you are going to present. For, I do know there are artists of proven reputation and famous as risk takers and 'innovators', who are battering down doors to get produced, selected, in venues, all over Sydney, and haven't got a "gong'. I hope explanations will be sought, to ensure the quality of the risks to come in the future.


When NIDA gave us the nod, we were so thrilled. I thought more about the structure and thought, "Why not replicate the way television shows are written?" There are five of us in the HOME AND AWAY writing team, and Romina, Gary, Jenny and Louise jumped at the idea of collectively writing the show. We had a fantastic time doing this and with the help of a number of reads and re-writes, conceived the script you see before you tonight

Our next job was to enlist the talents of an incredible and huge cast. I pinch myself every time I work with these guys. The talent in the rehearsal room has been so inspiring. ...

The whole process has been an absolute joy, the cast and crew have 'done amazing feats'! I hope you have as much fun watching the show as we did creating it.

Alfred Hitchcock said: 'T.V. has brought murder back into the home where it belongs.' Well now we're bringing them both back into the theatre.


And what Mr Hitchcock and Mr Atwell has said is true, for, the quality of this writing is television at its murderous worst, and, undoubtedly, I felt the 'murder' of the opportunity that this company had in this theatre was palpably, viscerally bloodied, all over the place.

"The evidence is there for all to see, your honour."

This was writing for an end-of-year-high-school party - juvenile, beyond all one's gathering misgivings and diminishing, charitable hopes. Or, for a wrap party at an exhausted television studio. The directing, by Mr Atwell, of the actors was limited to staging them (perhaps a camera rehearsal?) - none of them had any idea of what to do with this material (if they could do anything at all with this writing) or, even what they should be doing, it seemed. And, as there was no opportunity to "post-edit" this material into an acceptable quality - what we saw is what we got. It was LIVE (well a kind of alive) theatre, not television.

Pastiche, satire is not for the novice. It requires real skill and a sharp edged, delicate vision. This was, mostly, done with a sledge-hammer brutality. It was a brutal experience to sit through if one had any aesthetic values, or, even, especially, something else to do. I wished that I had been 'Finlay Jones', the murder victim, as he died before interval, and I thought at least he won't have to come back -YES, there is an interval, this 'sketch' material runs almost two hours! - and guess what? 'Fin' does come back, in FLASH BACK, after FLASH BACK, after FLASH BACK ......!!!!! Bad luck.

I went back as well. I am having flash backs about it in nightmare after nightmare since, and, I ask, as are some of my fellow audience who fled, do: "Why? Why? Why? Why did you stay?"  I guess," Courtesy, courtesy, 'stupid' professional courtesy."

In my experience of this kind of material, including the awful sketch shows that have blighted, mostly, our television (any of these writers claim credit?), and the divine Carol Burnett Show (oh, memories), it is a big risk to attempt. Two stellar companies: SOAPDISH (1991), a film directed by Michael Hoffman starring Sally Fields, Kevin Kline, Robert Downey Jnr.,Whoopie Goldberg, Carrie Fisher etc and MURDER BY DEATH (1976), written by Neil Simon, starring Eileen Brennan, Peter Falk (as Colombo, Mr Atwell), Alec Guiness, Peter Sellars, and Maggie Smith etc also fail to make this genre work - and they were, are, 'stars'.

The "absolute joy" of the rehearsal process, cited by Mr Atwell, unfortunately, does not translate into the theatre.

I shall say no more, dear Diary.

Go, and see for yourself.

To be scrupulously honest, there is some good writing.  It is by Mr Shakespeare and quoted by somebody in the SET:


Life's but a walking shadow; a poor player,
That struts and frets his hour upon the stage,
And then is heard no more: it is a tale
Told by an idiot, full of sound and fury,
Signifying nothing.


Let us hope SET - a who-dunnit soap-opera is "heard no more". But then Television is always desperate for material.

Channel 7 is a proud Corporate Sponsor of NIDA.
Posted by Editor at 5:28 PM