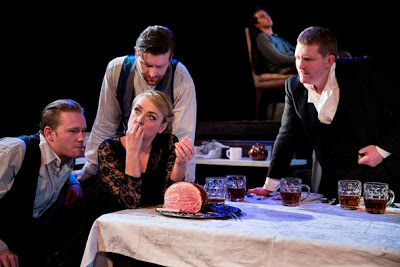 THE HAM FUNERAL by Patrick White was written in 1947. The first of the published plays (1965). The play has had a very dramatic life of its own, in terms of its performance obstacles in the 1960's, when it was, infamously, refused performance in 1962 by the governors of the Adelaide Festival. Last year, in 2012, Adam Cook, featured it, 60 years later, as part of his last season as Artistic Director of the State Theatre Company of South Australian Theatre (STCSA) and one of the jewels of that Adelaide Festival.

I have never seen the play before, or even, read it. Neil Armfield, a champion of Mr White's dramatic work, had in 1989, directed for the Sydney Theatre Company, a highly acclaimed production with Kerry Walker as Mrs Lusty, Max Cullen as Mr Lusty and Tyler Coppin as the the Young Man - the poet. I never saw it.

The play was inspired by a William Dobell painting 'The Dead Landlord', painted in Pimlico before World War II apparently in one of those great, damp, crumbling houses down towards the river Thames. Dobell told the story to White of how his landlord had died, how the landlady had taken down her hair, announcing there would be a 'ham funeral' and sent him to fetch the relatives. White wrote THE HAM FUNERAL as he prepared to leave London and return to Sydney. It reflected the continuation of his own struggle with freeing himself from the influences of his mother, Ruth.

David Marr in his masterful biography of Patrick White wrote:


"He adored her but knew he had to break free and stay clear of her, as he broke free from the Whites, from the land, from the friends, from lovers, from possessions, from obligations, from the ties which no longer served his purposes as an artist."

In the play, the Young Man wrestles the grieving Alma Lusty on the bed, and breaks free of her embrace remembering her startling statement, No man "ever really leaves the breast. That's our weapon. The softest weapon in the world."

He is assured by his anima, the Girl, to go, to leave,


"... You are beginning ... On many future occasions you'll wrestle with the figures in the basement ... passion and compassion locked together ..."

The Young Man of THE HAM FUNERAL is a propitious portrait of White's evolving persona with a portentous glimpse of what he needed to do to fulfil his ambitions.

The play is written in a very intriguing form:


"It was a kind of tableau vivant ... with dialogue, poetry and music hall routines ... (aiming) for something universal and surreal, a mixture of the hilarious and brutal."

and it was this that kept me, mostly, engaged with this performance at the New Theatre. I pondered the theatrical inspiration, heritage of the writing experiment that Patrick White was exploring in 1947. "Just what were the theatrical inspirations?", I wondered. When asked, White, simply replied,"I had read Wedekind." - EARTH SPIRIT; PANDORA'S BOX (the Lulu plays); and SPRING AWAKENING, perhaps?

The set design of this production (not attributed) along with the costumes by Anna Gardiner and the lighting by Sian James-Holland have a very attractive aesthetic. The stage pictures that the director, Philip Rouse, has organised are arresting, painterly in their own way. Physically, there is an attempt of stylisation, that is not always harnessed, seamlessly, to the exposition of the storytelling. The visual offers are more often than not causes for puzzlement and extraneous invitations to wonder of their intention, being statements without easy contextual meaning or clarity to the instant of the storytelling - the invented, choral interlude of the Four Relatives, extremely confounding, for instance.

Lucy Miller as the Landlady, Mrs Lusty, gives a very valiant and admirable performance working with committed focus, but, she is the only actor really attempting to use the language with any real consciousness of vocal technique, the only actor truly attempting to communicate her character through the language, the writing of Patrick White. The other actors have no sense of the word by word organisation of Mr White's poetry and err on emotional colouring over clarity of communicating the text of the play. There is much reciting, shouting and a kind of profound deafness to the musicality of the orchestrations of the prose/poetry e.g. no rhythmical structures or attention to pitch modulation - just loud noise. Most of the actors were not aware of even delivering fully focused line readings, often dwindling mid -sentence to a kind of emotional compression of the sounds of the words - Katrina Sindicich and Brielle Flynn blunting the dramatic dimensions of the famously surreal ladies and their rummage in the garbage-bins to find and render up 'a tender, humorous foetus', in the final scene of the first act.

Rob Baird, as Young Man, is never connected to his instrument for us to be able to hear clearly, to understand narrative or believe in a character. It is entirely a self-conscious, self absorbed performance. It does not appear to have any actor's sense of character arc, or of journey posts, to communicate to the audience. He does not attempt to engage with the other actors to plot his story, (he may have given up on them), for he generalises their presence and ignores their place in telling  his story. And if the Young Man is not a central invitation to engage us, then, the play is lost. This is surely part of the responsibility of the director, to conduct the music of the play. To place the language at the centre of the production. To help guide and focus his actors. This does not happen.

Many in the audience were lost and left in the interval. I stayed because of my fascination with the style of the writing and the boldness of its form as a play, written, wondrously, marvellously, in 1947. Even today it has a daring that demands attention, and that it is situated in the language, and the structure of that language as well as the surreal imagery, seems to have flummoxed Mr Rouse, who has pictures in the forefront of his creativity, rather than the balance of those images with, what I consider the primary task, the pictures of the oral/aural kind - the spoken text. Mr Rouse does not help us to see with our ears. The eyes have it, in this production. It is only half the achievement needed for this intriguing work by Patrick White, to soar.