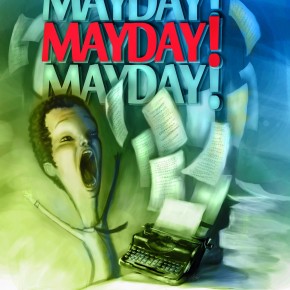 THE MAYDAY! Playwrights' Festival at the Tap Gallery, Darlinghurst.

THE MAYDAY! Playwrights' Festival organised and produced by Augusta Supple and Jeremy Waters at the Tap Gallery is a three week, three-program event, swiftly organised to fill the sudden void, an empty space, a freed up time vacancy at Tap Gallery.

Week 1 has six monologues from the '7 On Playwrights' recently published collection of works by Federation Press: NO NUDITY, WEAPONS OR NAKED FLAMES.

The works were well-directed by Augusta Supple and organised into a free-flowing program. I enjoyed and took special note of Hilary Bell's gently moving, DELLA'S CLOTHES. I enjoyed ELLA by Verity Laughton. As you all know, that is, those of you who read my diary, this form of theatrical presentation is not my favourite way to spend time in the theatre, and I have, perhaps, I regret to say, reached my point of tolerance. No more monologues - bring another character on, let's have an interaction with some argument-drama. Bring on someone else- wow! - three characters on stage, talking to each other. "Amazing", I'd say. Wouldn't it be terrific to have a scene, a sketch, a little play ... ? The monologue has become a bore, for me, a scourge of  the Sydney Theatre experience. I, now, approach them with a sense of duty. And, one out of six seems to be,  in my recent program going, the success rate. See, THE POLITICAL HEARTS OF CHILDREN.

Terrific is defined in my Australian Macquarie Dictionary: 1. causing terror, terrifying. The next colloquial definition: 2. extraordinarily great, intense etc or 3. very good. ... does not register with my experience of this kind of programming at all.

Thanks Ms Supple and Mr Waters for your enterprise and generosity. Best wishes.
Posted by Editor at 10:55 PM