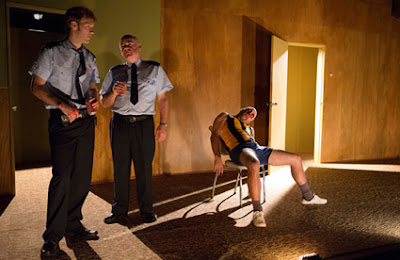 THE REMOVALISTS is a play by David Williamson written in 1971. This was one of the very first big blasts of the, then new, experience of seeing contemporary Australians on stage. It was a startling window into the sexist, violent and corrupt societal milieu of the times. Watching this production by Leland Kean for the Rock Surfers Theatre Company (previously known as the Tamarama Rock Surfers) at the Bondi Pavilion one wondered, I mean WONDERED, 42 years after the original production I saw at the old Nimrod St Theatre (now SBW Stables and Griffin Theatre), how, "Nothing much seems to have changed." Along with the shocked gasps of the politically correct in this audience, for me, this production of the play resonated powerfully as an indictment of our present time, 2013. (THE REMOVALISTS was presented at the Sydney Theatre Company in 2009).

A young, newly graduated police constable, Neville Ross (Sam O'Sullivan), arrives at his first posting in a relatively quiet suburban Melbourne precinct and is put under scrutiny by a seasoned officer, Sergeant Dan Simmonds (Laurence Coy). Old style experience meets naively trained aspirant. Endemic corruption meets the simply innocent. Fiona Carter (Sophie Hensser), a young mother of one, accompanied by her more worldly, elder sister, Kate Mason (Caroline Brazier), arrive at the police station with a request for assistance in dealing with an abusive and violent husband, Kenny Carter (Justin Stewart Cotta). Sergeant Simmonds takes advantage of the situation, after blatantly assessing the two women as possibly compliant, and volunteers to go to Mrs Carter's residence, with his young constable, to assist the two women in supervising a removalist (Sam Atwell), in removing the furniture, whilst Kenny is at his usual Friday night drinking session. It all comes unstuck when Kenny turns up at home before the removing has even begun.

This production is set in the 1970's  (Sound Design, Jed Silver) and the set design is deliberately, blandly realistic (Ally Mansell). The costume design (Rita Carmody), also, faultlessly, follows down that visual conceit. Having achieved that environment of nostalgic recognition, Mr Leland directs his company into a kind of hyper-realist style that gradually inverts our expectations. Instead of a fond look at the terrible 70's, a time past, and a sense of the security some of us may have of how we have grown as an enlightened and progressive society, he reveals,  the unvarnished, cultural relevancy of this play for our very own times: 2013.

The pacing of the production is deliberately keyed to a real time pace. It is steady and almost forensic in its delight at peeling back the ugliness of this Australian world. The playwrighting skills of Mr Williamson, are revealed patiently, rivetingly, brilliantly, and this company of actors capture both the black, mordant comedy of the observant eye of the writer, almost Ibsen-like - we do laugh, a lot - and, like  good Ibsenites, slowly reveal the dark and persistent underbelly of our present time - a complacent, morally bereft community. Like the removalist himself, we all, perhaps, still, continue to play no real role in involving ourselves in helping the others we know - by the reportage of our news sources - to be relieved from this kind of oppression, and, we allow, it happens everywhere but not, definitely not, in my back yard. Like the removalist we preserve our own worlds: "If there is work I work, if nobody interferes with me then I don't interfere with anybody". Live and let live. Evolution is a slow process. The play is titled THE REMOVALISTS, not, THE REMOVALIST. Plural not single.

Spousal abuse; sexual objectification - women as tradable commodities - and the complicitness in that by both sexes; sexual, emotional and physical bullying; social 'class' prejudice; unbridled violence; out-of-control and corrupt authority figures, are all laid out before us with unhurried precision and a cruel satiric coolness of black comedy in this production of the play. There is no theatrical censoring of image, there is no theatrical disguise of the consequence of violence, and there is, as well, no wagging moralistic finger pointing, or, judgement of characters.The realistic brutality and bloodiness of the play's events as they unwind are graciously shown to us. We are given time, to not just look, but, to see. This is no Greek Theatre gestural tradition: "the bloody drama is all happening in the wings" - this production does not require you to imagine the consequences of the actions of the protagonists -  it simply, shows you.

Under the sure hand of Mr Kean, the company of actors give wonderful performances. Caroline Brazier brings an intelligent reading to Kate Mason, and succeeds in creating, imaginatively, a fully rounded woman, surviving as best she can in the decisions she has made to live a life. Ms Brazier's work catapults "Kate Mason", historically, often believed to be underwritten as a character, into a complex human being. That enlightenment helps Ms Hensser to, also, especially, in the second act, to bring more substance to the role of Fiona, than I have previously experienced in other productions. Then, two, revelatory performances.

Sam O'Sullivan creates a believable and, ultimately, frightening arc of journey for his Constable Ross, from an almost simple-minded, ineptly motivated policeman to a bloody panicked 'thug' - no worse, and, most certainly, no better than the wife-beater, Kenny. Mr Cotta, begins creating a broadly unlikeable comic-brutalist of Kenny, and, yet, shifts some of us, to an empathy for his tragic predicament - of a bully tethered to a door handle and at the mercy of bloody-minded authority - no mean feat. The physical deterioration of the body of Kenny is masterfully constructed by Mr Cotta - without leave of the stage - it is marvellous in its subtle cosmetic detail. (Watch carefully.) Mr Atwell, is blessed with a famously comic opportunity in the writing, and captures that with a little too much relaxed ease, for me. This Removalist remains a simply comic creation, with no creative hint to the dramaturgical function of the title character. On the other hand, the performance of Mr Coy as Sergeant Simmonds is so carefully and daringly calibrated, so funny, so frightening and so threatening, so corrupt, that his fate at the hands of his apprentice Ross, in the last moments of the play, is welcomed with a great sense of justified come-uppance. Mr Coy has created a terrifying, despicable and flawed human of our shared species. Formidable, indeed.

My admiration of the dramatic performing style of hyper-realism created by Mr Kean in his design choices and in the guiding of the actors, (assisted by Scott Witt as Fight Director), is trumped, counter-pointed, with the highly effective expressionistic, surreal, Gothic lighting design of Luiz Pampolha. Both these artists' choices are powerful in underlining the savagery of the play and at the same time help us to, unconsciously, accept the ugliness of the stage action, perhaps, momentarily even, allowing it to be explained away, merely, as theatre. It allows us, along with the wit of the writing, to bear to attend to the play. It is a sophisticated contribution to the performance, indeed.

On reflection, we may conclude, after, in the foyer, that there are no admirable characters in this play - none at all. And it might also have you digest that this play is a savage indictment of our world and our attitudes - the necessary removal, by us, of any acknowledgement that this is going on about us, and that it is someone else's problem not our's. It was arresting to read the account of the: DEFIANT MOOD AT FOWLER FUNERAL, reported in the Sydney Morning Herald by Damien Murphy on Thursday, May 23rd, 2013, (page 7), the day after attending the play production. Mr Fowler (what a wonderful name for this character, in the theatre/play of life!), as a police officer, a detective inspector, was caught on video receiving bribes of a substantial amount from criminals, bringing the police into considerable, and at last, confirmed disrepute. (The Wood Royal Commission was set up consequently.) Ex-policeman and ex-members of the Kings Cross establishments attending the funeral, last week, swore vengeance, of a kind, on the former policeman who trapped Fowler declaring him as "a Judas ..." There was no further comment from the press or the public. It seems, nothing has really changed since our Sergeant Simmonds in the 1971 play by David Williamson. I am too cowardly to read the contemporary statistics of spousal abuse, no matter how politically correct I believe myself to be. But, suspect, it is still much the same now as it was in 1971.

Rock Surfers Theatre Company, again, makes claim as an outstanding member of the theatrical scene in Sydney, this year. This production of THE REMOVALISTS has one considering the classic qualities of Mr Williamson's writing, very seriously, indeed.

If you are a serious theatre goer then this production is certainly deserving of your attention. Should not be missed.
Posted by Kevin Jackson at 10:52 PM