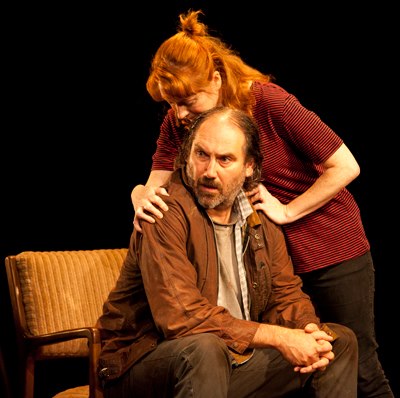 Belvoir with the Liverpool Everyman and Playhouse presents FORGET ME NOT by Tom Holloway, at the Belvoir St Upstairs Theatre.

FORGET ME NOT is new play by Tom Holloway, it, having been commissioned, jointly, by Belvoir and the Liverpool Everyman and Playhouse. This play has its origins in the tragic history of child migration. The origins began in Great Britain in 1618 and concerned the colony of Virginia. The last child migration party arrived in Australia in 1970. The reality was that children as young as three were removed from their homes. Many children were removed without their parents knowledge or consent. Most of the children were told that they were orphans and that their parents were dead. They were promised of life with plenty of oranges and sunshine. Many experienced degrading physical, sexual and emotional abuse. "Well known charities such as Barnardos, along with the Church of England, the Methodist Church, The Salvation Army and the Catholic Church, played major roles". In the post-war era, approximately 3,300 children were shipped to Australia.

In 1986 Margaret Humphreys, whilst working as a Nottinghamshire social worker, "received a letter from a woman who claimed that at the age of four she was shipped to a children's home in Australia, and now wanted help to find her parents, or any member of her family in Great Britain". Astonishing facts of history were revealed, including: 130,000 children were removed and sent across the world of the British Empire, Commonwealth. The Child Migrants Trust was established in 1987 to investigate and assist similar cases.

The Director of FORGET ME NOT, Anthea Williams, began working with the Liverpool Everyman on a joint project with the Belvoir in 2011 …"Innocently, Ms Williams was asked: "Do you think Australian audiences will have thought about stolen children more or less than English audiences?" How tragic to have to explain that taking children from their families and communities is one of our national stories."

Sally (Mandy McElhinney), the daughter of Gerry (Colin Moody), in her attempt to unravel, for her father, the origins of his desperate and violent social behaviour, calls upon an investigative social worker, Mark (Oscar Redding) who traces Gerry's origins back to Great Britain and finds a Mrs Mary Connor (Eileen O'Brien), an estranged mother. The tragic circumstances of bureaucratic action on ignorant and innocent lives is the storytelling of this play by Tom Holloway. Gerry and Sally under the guidance of Mark travel to visit Mary. Unfortunately, a tragic fate intervenes, and Gerry is left only with a pile of unposted letters to 'talk' with his mother, Mary, with.

Tom Holloway is a consistently challenging and inventive writer: BEYOND THE NECK (2007); DON'T SAY THE WORDS(2009); AND NO MORE SHALL WE PART (2011) have been seen in Sydney. The work is not at all linear, it has what Mr Holloway calls aspects of 'post dramatic' writing - this is a movement away from direct story telling and is often fragmented and experimental in its form. One has to be alert and almost in need of a cryptic nature to discern the work. Challenging then, but, exciting if you put the work in, I reckon.


In FORGET ME NOT time and place collapse, and ultimately Tom (Holloway) has created a play that is structured by Gerry's internal journey and his growing understanding about his past, rather than a linear journey across sea and land. ...

Like, but slightly different, and not as complicatedly, to the play structure of Arthur Miller's DEATH OF A SALESMAN, this play happens in the head space of Gerry, and chronologically, in old fashioned linear time, as much as it does for Willy Loman. The scenes in each of these time line spaces are shuffled together and it is the audience that has to put the pieces into order. It is a jigsaw puzzle that requires the audience to be alert to the writing clues and the directorial guidance through the maze. The solving has the kind of anachronistic thrill that the time plays of J.B Priestly had/have on his audience - DANGEROUS CORNER (1932); I HAVE BEEN HERE BEFORE (1937); and, famously, AN INSPECTOR CALLS (1946) - disconcerting at first, but, satisfying in the detecting and unravelling.

Ms Williams has had Dan Potra with his set design, create a small revolving space, furnished with room fittings of a 'fifties' style, neat, with faded working class, affordable tastes, which serves for both homes, the one in Australia for Sally and Gerry, and, the other in Great Britain for Mary Connor and 'visiting' Gerry. The first arresting task is for the audience to puzzle out this solution, for, there is no adjustment to the furnishings for each location, just a change of light (Matthew Marshall), as Gerry deals with Sally at home, and then, Mary in her home. It is just a simple revolve to give a different point-of-view, it seems.

The costuming, again by Mr Potra, is of simple working class statements, except for the appearance of Mary, who has a, relatively, idealised hair coiffure - it appears too genteel, kind of oddly fantastic. The commencement of Act two, when social worker, Mark, visits Mary for the first time and we meet Mary in her home, we see a weak, sick exhausted woman with an oxygen tank trolley and mask with hair stickily plastered to her skull shape. When, next, Gerry is with Mary, the hair is back to the original extravagant look. There are two "Mary's" ! We ultimately find that one is a delusional projection on the part of Gerry, who, having arrived in Great Britain too late, instead of meeting Mary, can only attend her funeral, and have a life-time of unsent letters as his long sought 'conversation' with Mary, his mother. Mr Holloway's writing and Ms Williams' direction reveal all in the last moments of the play.

Ms Williams' has elicited wonderful performances from all the cast. Ms McElhinney is tough and yet compassionate, and develops a journey of growing empathy for Sally's brutal father, as she discovers the tragic circumstances of his life. Mr Redding is remarkable in the subtle detailing of the social worker, Mark, and creates an insightful public servant - professional but sorely 'touched', by what must be a too regular work journey - he is not jaded or numbed with the regular patterns of the social and personal tragedies he must assist in.

Colin Moody uses his dominating physical presence to present a simmering force of volatile rage - a person to avoid - and yet engage us with a curiosity to understand it. On the night I saw this performance there was sometimes a telegraphing of the states of 'suffering' that did not have the complete appearance of a living pain - it was slightly, remotely demonstrated - mostly devastating and frightening, but, not always 'true'. This was contrasted by the consistent and understated solving of the dilemma that Ms O'Brien has , as Mary, with having to play an imagined persona (by Gerry) and then reveal the reality of a disintegrated life force given a hope of reconciliation at the last possible stroke of her time. The economy and clarity of Ms O'Brien's work was masterful indeed.

The long process of preparation by Anthea Wiliams on the development of this production shows positively in its presentation, and matches the promise of her work on Matthew Whittet's OLD MAN, last year in the Belvoir Downstairs Theatre.

FORGET ME NOT was one of the better nights I have had at Belvoir for some time.
Posted by Editor at 10:30 PM