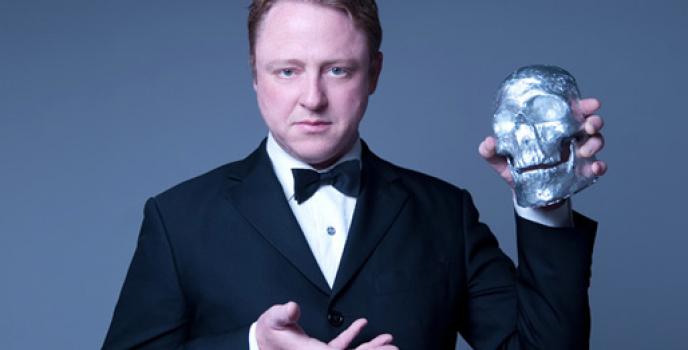 Apparently, Travis Cotton got the idea for this play, ROBOT VS ART from a picture of two robots performing the first ever robot actor play. It occurred in Japan, in 2009. I don't think Mr Cotton ever saw the play, just the picture. One of Stephen Fry's top 100 inventions was that endearing little Japanese robot dog - I saw it, co-incidentally, the night before this play, on television. It was cute, but, not very sophisticated. There had also been a news item concerning the use of robots in hospitals to deliver bedding etc. Again, not too sophisticated.

From the foyer card:


In the not-so-distant future when robots start thinking for themselves, they decree that planet earth will not survive unless humans are destroyed, (now that is an interesting subject for expansion). So they execute most of humanity and send the rest to slavery in underground mines.
But when Executive Bot (Simon Maiden) writes a play (called ZINC), Giles, a human director (Daniel Fredericksen), is sent up from the mines in the hope that robots will be able to calculate the formula of art. But because Executive Bot can't feel, he can't enjoy art. So he makes a deal with Giles: if Giles is capable of putting on a play that can make robots feel, Executive Bot will let him live; if he can't he will be executed in front of his cast: Claw Bot, (played by Paul David Goddard) and Fembot (played by Natasha Jacobs).

The performances are endearing and amusing. Mr Fredericksen, distinctly admirable in being able to keep a straight face and chart a believable trajectory across the journey of the material, amidst the aplomb of the robot actors - although, I felt I did detect a lot of actorly 'feeling' going on from them, which kind of defeated, for the pedantic, the object of Executive Bot's need. The robots were expressing some amount of feeling already! They seemed to feel quite a bit when reaching for that Chain! Mr Maiden was especially arresting in his discipline and textual handling as Executive Bot. The production values are a little light-on (set design by Matthew Rainey, no costume design credited) and the organisation of scene changes still in need of more economy, a trifle time consuming, halting the flow of the story too often. The Lighting by Claire Springett is sufficient for the action and the sound a useful accompaniment by Mark Farrell. Directed by the writer, Mr Cotton, it is very tightly held, disciplined.

ROBOT VS ART is fairly superficial in its comic investigations and a little too often, "theatre-industry" heavy in its comic diversions, but tantalisingly, occasionally, announces an interesting premise for debate. Sadly, however, there is little or no follow through, never really getting down to any real plumbing of them. It likes the sit-com structure of a 'luv'-plot more (a bit one-sided, I would've thought, considering the 'keel' of the plot).

It is a mildly amusing night at the theatre - it is a one-joke concept, extended for too long a time. Like the real robots I saw on TV: cute but not too sophisticated. Where is DAVID (Michael Fassbender) from PROMETHEUS when you need him? Oh, so sophisticated and sexy as well! Now let's begin there with the robots and I reckon art may be found.
Posted by Editor at 12:20 AM