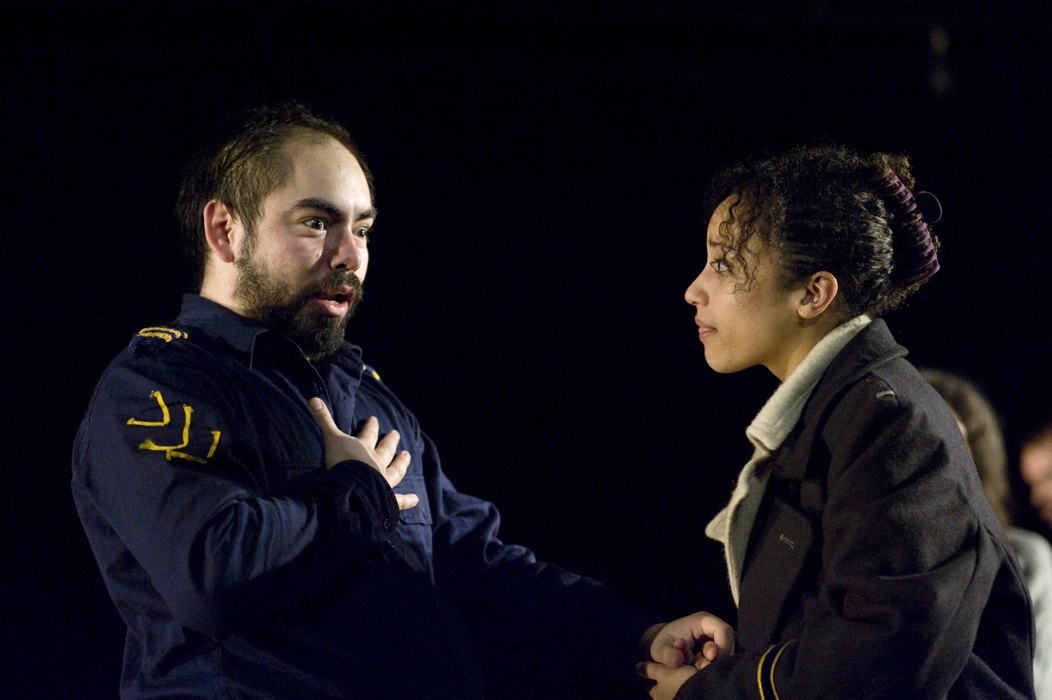 Seymour Centre in association with Sport For Jove Theatre present OTHELLO by William Shakespeare in the Reginald Theatre, Seymour Centre.

OTHELLO is one of the great tragedies in the Shakespearean canon. It is not often shown on the professional stage in Australia, although I have seen several productions in Drama schools (in the past few years) and, of course, in the United States. There are many films including, the Orson Welles and Michael MacLiammoir (1952), the National Theatre production with Laurence Olivier, Frank Finlay (1964); Anthony Hopkins, Bob Hoskins (1983) and the Laurence Fishburne, Kenneth Brannagh (1995). (Verdi's operatic version, OTELLO, is also available.)

This tragedy is not about kings or queens but rather soldiers - ordinary men, in domestic and private struggles, the actions of the story will not affect the universe, even the great state. It is about a single emotion: sexual jealousy and results in a (sordid) crime of passion. It deals with "a charming man without a conscience" - a kind of psychopath - Iago, who maliciously acts upon the naive, romantic soldier of men, his general, Othello, resulting in, essentially, an interior drama: the collapse of Othello's psyche. The role of Iago is a tightly wrought 'ride' with a villain, who confronts and beguiles the audience with his schemes in a language that is "colloquial, obscene and knowing" - mostly written as prose. We watch as Othello falls dupe to his friend's persuasions, we hear him protest and stagger in ornate and formal speeches of eloquent poetry - mostly, written in verse. It demands as, the above casting in film suggests, actors of some equal power. Sport For Jove's production of OTHELLO does not have that mutual support.

Damien Ryan, as Iago, has a vision and energy, a skill with the language and the emotional requirements to pitch the machinations, intellectual and otherwise, of this character to great effect.There is, unfortunately, no equivalent artistic force of expressed vision to counter this work by this actor, in this production, for the survival of the drama of the play. He is virtually throwing his offers to the wind. There is no doubt that the company of actors have an intelligent grasp on what they are saying, for the spoken text has a clear comprehension, but it is all to no avail, as most of the cast have not the real courage of the emotional ownership of their responsibilities, or, apparently, any direction to guide them to a more truthful experience of those emotions, beneath the text, in their moments of utterance. The time in the theatre dwindles to an under expressed recitation of the words on the page, from most of the company, and, at three and a half hours in length, it needed more than that to sustain, even, one's indulgent eye and ear. One did not gain much more from seeing this production live on stage, than one would have had by watching the film, or, reading it at home.

Other than in the work of Mr Ryan this production, directed by Matt Edgerton seems essentially under-cast, in too many instances, mis-cast (a catastrophic conclusion with only eight actors engaged), and/or under-directed. Ivan Donato constantly thwarted the lofty poetry of Othello and resisted the emotional 'madnesses' of his language, and, truly Othello's downfall has to be measured not so much by what happens to him but what happens to his language and its vocal expression - under-seized, under-flourished, as it is here, the play founders without proper balance to the despicable pressures coming from Iago. It is difficult to fear this descent, that this Othello takes. There is no heat in this production.

The Design, by Marissa Dale-Johnson, in contemporary dress and set, a beautifully tiled pool of water, flooding the stage, and suitably lit with the dark shadows needed for these Shakespearean schemings, by Matt Cox, are the other two assets , beside Mr Ryan, of this production.

The school audience I saw it with, sat quietly, and uttered only laughter at moments, and seemed to be dutifully respectful to the actors, rather than truly engaged or moved by the story in any visceral way.

The present National Theatre of Great Britain production is to be screened in the coming months. The press for the modern dress production by Nicholas Hytner has been, glowing. The contrast of experience will be interesting to experience.
Posted by Editor at 9:58 PM