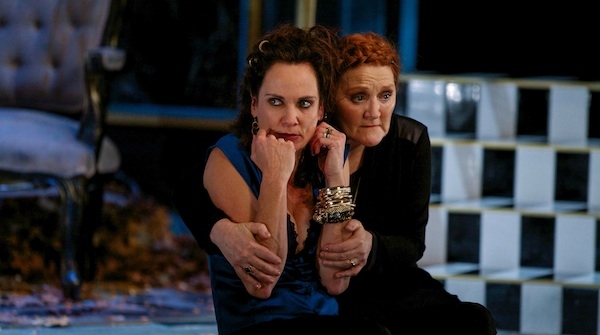 Bell Shakespeare presents PHEDRE by Jean Racine, in a new version by Ted Hughes, in the Playhouse, at the Sydney Opera House.

PHEDRE by Jean Racine. The body of the story in this play has its origins from the time of the fountainhead of the flowering of Athens and its peoples, the fifth century BCE, who were describing a totally new conception of human life, and showed, for the first time, what the human mind was for. "The Greek legacy", says Peter Watson in his book, Ideas: A History from Fire to Freud, "is the greatest the world has yet known. " Amongst the works of philosophers and artists of other kinds, during this experiment of a new governance, three great tragedians have left some record of their minds' thoughts in the theatre: Aeschylus, Sophocles and Euripides.In the play HIPPOLYTUS (428 BC) by Euripides, Phaedra first appears.

Later, the Roman poet, Seneca, around 50 AD, during the tumultuous governments of Caligula and Nero, wrote a work with PHAEDRA, as his title and the centre of his pre-occupation. PHEDRE by Jean Racine was written in 1677, during the reign of Louis IV, the Sun King, in the time of an assertion of a way of government that was challenging in the surety of its probity for a steady future. It was the last of his great plays, and is regarded by most critics as the greatest of them. (Pierre Corneille and Moliere were two other writer's in this period of French history - a 'wealthy' time for the theatre arts, indeed). Originally, Racine had called his work PHEDRE ET HIPPOLYTE, but in its second printing ten years later, it became simply, PHEDRE. In 1996, Sarah Kane wrote PHAEDRA'S LOVE - in it, Hippolytus is at the centre of the text.

It is a marvellous promise of excitement to see this play. And when sitting in the theatre, hearing this text, one is reminded of the deeply buried need, recognition, of the power that tragic tales have on the formulation of our own lives and their dilemmas. How one longs to see THE GREEKS, and their iconic plays: e.g. Aeschylus' AGAMEMNON; Sophocles' OEDIPUS REX; Euripides' MEDEA. One forgets that need, until one sees/reads once again, the raw humanities of the stories' unrelenting exposures of that animal part of us, struggling to have the "other", that is so necessary to our every thought, to every fibre of our present existence, to be satisfied, to the point of lunatic exhaustion, even - cultural taboo or not - whether it be stranger or family - mother, father, brother, sister (or, even Mr Albee, a goat!!). These plays express such a primal part of our DNA, our biological imperative to survive, the need to procreate, to employ that appetite that is most necessary: sexual congress, transferred in our 'romantic' consciousness as love, and expose the all imposing consequences when it becomes unbalanced in our behavioural needs. Sexual desire wearing the face of romantic attraction. Love, for the lovers, so gripping in any context, but so terrifying when in the shadows of the territory of the forbidden. A kind of madness, leading to an inevitable torturous death. The relative safety of our removed voyeurism in the theatre, in watching these perversions, in watching others of our kind being reckless and punished, is a guilty pleasure and exhilarating thrill - there, but for the grace of the gods, go I.

This French classic of 1677, in the brawny tooling of the English poet, Ted Hughes, 1998, gives us the fascinating love torture of Phedre, Hippolytus, Theseus, Aricia, Oenone and Theramene in an English language translation/adaptation that is directly understandable and uncluttered, almost colloquial, eschewing the more usual romantic gallantry of some of the other English translating of Racine, and though, perhaps, lacking some of the niceties of the original twelve-syllable French Alexandrine, and "lingering on metaphor and imagery relating to animals and monsters", gives us, on hearing it, a more visceral heft in the theatre. The language, then, is thrilling in its clarity and richness, and the plotting, the turning points of the narrative telling (this is Racine, of course), are weighed and weighty, with a kind of immaculate 'timing' that draws one willingly into witnessing the vortex of self destruction that all the characters bring onto themselves. We , observers willingly enter into that remorseless appetite of the gaping, stained mouth of that ugly vortex - desperate love - it, daring us to an unconscious delight in partaking in the vertigo of sex/love's malignant causes, even to the horrible consequence.

This company of actors: Catherine McClements, Marco Chiappi, Edmund Lembke-Hogan, Abby Earl, Julie Forsyth, Bert LeBonte, Olivia Monticciolo and  Caroline Lee, are well drilled in the clarity of the speech, clear, they know accurately where they are in the story in the language - intelligent. The opening sequence of this production of embodied brains and voices, is an impressive "Stand and deliver" or, in this case, from some, sit and deliver. Direct operatic-like delivery.

However, as the production begins to physically move, some of the voices/bodies are too young. Others deliberately too laid back in understatement. They are clear, but, with not enough strength, vocal charisma, in expressing Mr Hughes powerful imagery - the sounds belying the power of the words, the language, the true ownership to convince us. Some others become entangled in the personalized emotional response and let their bodies and faces, all external show, twist and fit, making the physical choices the principal offer for us to interpret at the expense of the words and the language sense. Others, surrender to their feelings and ultimately bury the language altogether into a kind of purring motor engine growling - noise, and not intelligible communication of information. It was, then, a mixed journey of dwindling returns for the audience as the story unraveled. The greater part of the text lost in lack of instrument clarity and ownership. Emotions overriding the words. Ultimately, for me, the play was better read than heard.

Catherine McClements as Phedre plumbs her emotional depths to touch the agony of the possibilities of this unfortunate woman. But what we see is another version of Ms McClements, giving, with different words, a repeat performance of her Martha from WHO'S AFRAID OF VIRGINIA WOOLF? Martha and Phedre are inter- changeable - the naked core being the tremendous presence of Ms McClements. Undoubtedly, a brave revelation of Ms McClements' inner life - her courage is phenomenal - but, in result it is not defined with any differences of context of the differing circumstances/worlds of the plays. It is not a Phedre we see and hear onstage, but an openly vulnerable Melbourne actress. This is a distinctly modern woman assisted by the designer, Anna Cordingley, with all of the costume accouterments of today, including perilously high heels. This performance has none of the given circumstances of the kingdom of Troezen but rather that of a high heeled brunette 'Barbie-doll’ - rich, spoilt, self indulgent. The interior life of this Phedre is narrow, self absorbed. There was no sense of being stalked, hunted, haunted by gods. No sense of the burden of her family's destiny. No dignity in her suffering. No sense of the melancholy of a family doomed, to a fated and inevitable tragedy. One was not moved by this victim of the gods, one was, ultimately, irritated and switched off, by a kind of self-lacerating indulgence. (A simple case for an exorcist, I would have thought).

Peter Evans, the Director, has not captured the epic scalings of this 336 year old classic, there are no echoes of the 2400 years of the origin of this attempted understanding of the human condition. Relentlessly contemporary in all the choices the production stayed earth bound and became distressingly incomprehensible in those terms. (Present day life would not have endured this Phedre, even in Melbourne, she would be in care - why do I think of Princess Diana, when I say that?) Designed by Anna Cordingley in the colours of a cold blue moon in what looked like a tiled hallway with a collapsed roof, decaying and precipitous, an awkward transitional room, it lacked majesty, authority - autumn leaves blowing in the street. The lighting gloomy and without ever a hint of the revenging glare of the sun - not even at Phedre's death (Paul Jackson) - with the modern visceralities of the sound composition by Kelly Ryall being the only truly moving instrument employed to grip the audience.

A disappointing production of a great text, a great story. One earnestly wished it was otherwise.
Posted by Editor at 10:02 PM