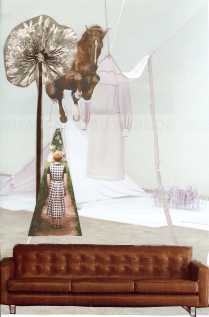 THE TWELFTH DAWN is a new work devised by Gareth Boylan, Kerrie Glasscock and Michael Pigott. This work began, for these artists, with a discussion around David Malouf's novel, RANSOM, which was inspired by the last chapter of Homer's THE ILLIAD. It tells of the journey of the grief stricken Trojan king, Priam, recovering the body of his son, Hector, from the possession of the Greek victor, Achilles. It tells of the rage, pride and grief experienced by all in this great story, with humanity and a profound insight. One of the strands and themes of this source material has occupied these artists, that of the relationship between parents and children, and grief.

These three creators have worked together before, and they obviously benefit from the safety of that prior knowledge. Developing both a vocal text, some of it extremely beautiful, and investigating a physical choreography to tell their story, (reminiscent of the recent physical investigations of say, Kate Champion: e.g. FOOD or Frantic Assembly, e.g. STOCKHOLM) THE TWELFTH DAWN evolves with a delicate and mesmerising weave of mystery around a contemporary, domestic story, that gradually unravels to a deeply moving reveal and resolution.

A stage manager (Gareth Boylan), sets a naked stage with furniture and begins, in the tradition of a chorus, or, of later usage, a Thornton Wilder Stage Manger figure reminiscent of his OUR TOWN, to give introduction and comment to the story. He is a constant presence and contributor to the telling of the story, directly to us, the audience. We meet a couple, Kerrie Glasscock and Michael Pigott, obviously in some emotional state of relationship dysfunction, and they, through dance/movement and spoken text, explicate their predicament. I remarked in my recent entry concerning Bell Shakespeare's PHEDRE by Jean Racine, of how elemental the Greek stories, myths, seem to be ingrained in our human psyches and even today reach into our 'souls' with profound ease and meaning. THE TWELFTH DAWN is further proof of that distant and constant presence. The work is beautifully conceived and constructed.

The problem at Theatre 505 is that in transferring their investigation into performance, a director's hand needed to be more vitally present. For, none of these creating artists appear to have the requisite skills, or, a director's disciplinary eye to guide, to turn the writing into the transcendent experience that it offers. Mr Boylan does not have the vocal or acting skills to bring the necessary clarity and gravity to his tasks, which are crucial, central, to the received work, for the audience - he tells us in the program notes that this is his first show in twelve years - it shows, and is, unfortunately, an undermining influence, a distraction, it is difficult to be immersed in the story. The physical skills of Ms Glasscock and Mr Pigott need the caring hand of a choreographer and more expertise (fitness) to fulfil the ambition of its inclusion to the structure of the work, to lift it to be the invisible tool of seamless storytelling it aspires to be. The relative awkwardness of both artists undermines these possibilities. The presence of a director may, further, have assisted the play's story, by guiding Ms Glasscock to lessening the textual emotional life that she tends to use to gild the language of her speeches. For instance, in the last speech, it had a tendency to swamp and drown the words' sense. It became a cathartic experience for the actor but left me, on the night I attended, relatively, mystified as to why. The material that these divisors have created is of great potential, the performance, however, lessen its impact.

THE TWELFTH DAWN, in a different production, might prove to be a very interesting asset to the new Australian writing of this year. I was excited by its potential. Go, see for yourself. The audience, I was with, seemed to be moved by it.