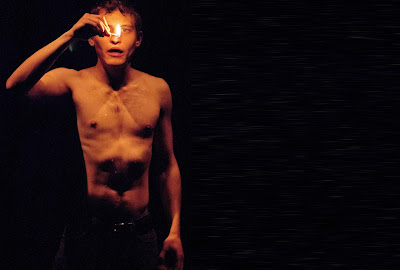 Stories Like These and atyp Under The Wharf present FIREFACE by Marius Von Mayenburg, translated by Maja Zade at the atyp Wharf Theatre, Wharf 4, Hickson Rd.

FIREFACE was the first play of Marius Von Mayenburg for the Schaubuhne am Lehniner Platz, Berlin and it was awarded the Kleist Prize for young dramatists in 1997. Several years ago the Sydney Theatre Company (STC) presented a production by Benedict Andrews. Mr Von Mayenburg has gone on to a very prolific career.

The play is a stringent look at the core social structure of any society: that of the family. Vitally, in this case, in contemporary times. In many short scenes, the play mounts an unrelenting pressure on the audience, as we observe sex becoming an 'evil' presence in a lackadaisical family. A Mother (Lucy Miller), a Father (James Lugton), a daughter, Olga (Darcie Irwin-Simpson), a son, Kurt (Darcy Brown) and a young outsider, Paul (Ryan Bennett ). FIREFACE, it seems to me, is about sex being the root of all evil. A 'fire' ignited, in the natural order of things, in the young son, is ignored and the consequences of that neglect consumes a family in a fire face of terrible destruction: incest, torture, murder and madness. A play of Greek tragic proportions harnessed in the distressing surrounds of our everyday lives.

In this translation by Maja Zade, the Mayenburg play is gripping and fascinating - a very good piece of writing coming from the angst of the economic excesses of the nineteen nineties. A malaise of boredom that too many comforts can give and lead to unchecked interests that can consume us. It seems to attempt to show us, to example for us, to explain to us and to warn us. Sixteen years later, in 2013, not enough warning has been taken, perhaps. The origin of so many of our heinous reported crimes reflects the world of this play in painful details.

Luke Rogers has gathered a design team about him: Lucilla Smith as Set and Costume designer; Lighting Designer, Sian James-Holland; and sensitive and intricate Sound Design by Nate Edmondson; and found a deft manner to keep the many, many short scenes seamlessly building to the play's climaxes. The production has very focussed visual aesthetic and a sure hand at dramatic tension.

The total impact of the potential of the playwright and the aesthetic tensions, however, are undermined with Mr Rogers' management of his actor's performances. The core problem lies in the lack of depth and control around the work of Ms Irwin-Simpson as the rebellious and manipulative daughter, Olga. In this production, Ms Irwin-Simpson, seems to draw on a shallow understanding of the psychology of her character and opts for superficial shouting (bellowing) , an appearance of a pained 'personalisation', throughout most of her work. It lacks subtlety of craft and sensitive interrogation, and goes, unfortunately, a long way in disturbing the possibilities of the other actors to shading their work into the powerful depths that the 'Greek' longings of the play demand. It is odd to watch this work from Ms Irwin-Simpson, when one remembers her good work, which was nominated for Best Actress and Best Newcomer in 2012 Sydney Theatre Awards for PUNK ROCK. What a difference a director's sure hand can make, it seems.

Mr Brown is most dependent in interaction with Ms Irwin-Simpson to develop his story responsibilities as Kurt, and, as such, is handicapped by what he can usefully work with. That he does manage some of the undertows of this young man and a development of a relationship with his sister is creditable, but does seem to require him to play with 'substitutes' of partnership that are very interior, and seem to be very introverted, and maybe, necessarily, from another world, than the world on stage. It is an imagined interior world he builds from, and he does tend to ignore the offers of the other actors about him - Mr Lugton and Ms Miller attempt to assist but are, relatively, blocked out, as well. The oddly striking presence of Mr Brown and his thoughtful demeanour had me developing a story that was that of Caligula and his sister, rather than that of Kurt and Olga - so intense was the interior world that Mr Brown seemed to conjure. Both, Mr Brown and Ms Irwin-Simpson, leave little room for Mr Lugton and Ms Miller to engage with them, and that the relationship between the parents becomes the more interesting one on the stage is the result. Poor Mr Bennett as Paul, the outsider male, too, is isolated in his tasks, and except for the anguished inclinations of the father towards him, has the least chance to cover the dramaturgical functions and necessities of the writing.

Having seen these actors at work before, one must, if one is watching for explanations for the varying qualities of the acting, lay it at the feet of the director, Luke Rogers. Staging and visual concepts are interesting. Direction of these usually reliable actors, lacks nuance, appears technically, unskillful - and is odder still, as Mr Rogers is himself a trained actor, and has, what is often lacking with less credentialed directors, a knowledge of what an actor needs to give good work.

FIREFACE a disappointing night at the theatre, I'm sorry to report, because the play, just for its writerly qualities, is worth knowing.
Posted by Editor at 8:32 AM