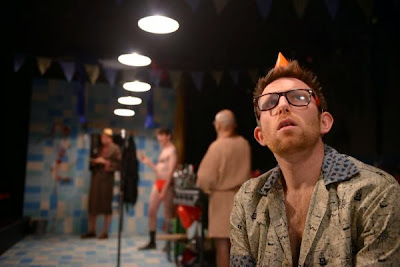 Siren Theatre Company under the direction of Kate Gaul is presenting PENELOPE by Enda Walsh. In March, last year, Ms Gaul presented THE NEW ELECTRIC BALLROOM at the Griffin Theatre , also by Mr Walsh, and I presume Ms Gaul is simply following the old adage that when you are onto a good thing stick to it.

PENELOPE is another wonderful example of the Irish storytellers ability to spin the English language into fabulous concoctions of delight. This time Mr Walsh stretches into the world of Homer's Odyssey (in the tradition of another Irishman, James Joyce, perhaps), and in this particular case, into the last chapter of the Homer book where the suitors to Odysseus' (Ulysses) wife, Penelope, propel themselves into a desperate pitch of devotion to win her before her husband returns. Here, Mr Walsh has four desperate, desperately ageing men, undressed in swimming attire - truly, physically, underscoring one of the pathetic themes of the play, Time Is Tragedy, with challenging ocular clarity - at the bottom of a drained swimming pool barbecuing sausages in 33 degree heat. Each in turn, using the habits and skill of their humanity, or not, besiege the cloistered Penelope, for her favours. Each of them, Burns (Thomas Campbell), Quinn (Nicholas Hope), Dunne (Arky Michael) and Fitz (Philip Dodd) inimitably use language to impress. Penelope (Branden Christine), ravishingly dressed in gold, appears, but never speaks. Does she choose, or, has Odysseus thwarted all, with his unexpected return?

All the performances are able to deliver the tasks set by Enda Walsh with splendid clarity and poetic languishing. The quicksilver physical and verbal energy of Mr Michael is especially tantalising; Mr Campbell exerts on his language usage an astounding ability to sustain the double whammy of the information in the line and the powerful emotions of his character's predicaments - a very model of a young contemporary actor, truly, on top of his craft balances; Mr Hope is mercurial in his machinations, and Mr Dodd, is hilariously languid and pompous with all he does - which allows such surprise in the latter of the unwinding of his suit to Penelope.

Co-designers, Kate Gaul and Tom Bannerman have re-configured the space at the Tap Gallery into a traverse - audience on either side of the action - and within the limits of this unusual space, much is achieved with that decision, with intimate and shared experience being a demand for 'naked' participation from the audience. Fortunately, the playwriting is deliciously challenging and beautiful - it is not for the tired-of-mind but for the active participant. Sound Composition and design by Daryl Wallis creates an affective surround for the action and emotional narrative of the play.

The company for some odd reason did not elect to use the poetic dialect of the writer's music and I do believe some cadence and its magic is probably lost (remember, the poetry loss with the Belvoir decision in the recent CAT ON A HOT TIN ROOF to, similarly work in the Australian soundscape.) I, personally, found the poetic allusion to Homer and his men and the welter of vocabulary of Mr Walsh's play, not persuasive to the Australian barbecue scenarios of my life time that the dialect work of these characters/actors were personalising for me, and so i was deflected and distracted from complete absorption. Mr Walsh is, I am sure, also, using the play as a metaphor in discussing and spotlighting the politics of the historic 'troubles' of the recent and present Irish past - the 2008 film HUNGER written by Mr Walsh, dealing with the final days of the IRA hunger striker Bobby Sands - suggests a very passionate consciousness of those politics in the expressive content of his work. I believe the play loses some of its real power with the extraction of the contextual Irish sound and placing it in the world of an Australian experience that I cannot parallel, with the same intellectual and emotional force.

Despite those big distractions, the writing, the acting and the staging/direction of the play is a very welcome experience, when so much of the work we have, going on about us, is so conceptually and verbally banal and dull.

The Tap Gallery has this year hosted two of Sydney's most arresting experiences in theatre going this year.: THE MOTHERFUCKER WITH THE HAT by Stephen Adly Guirgis being the other.

I find your issue with the Australian accent really strange. "The poetic allusion to homer and his men" would have been fine with an Irish accent but not with an Australian one? Why? An Irish accent is nothing like a greek one (and as it happens, Arky Michael IS greek).