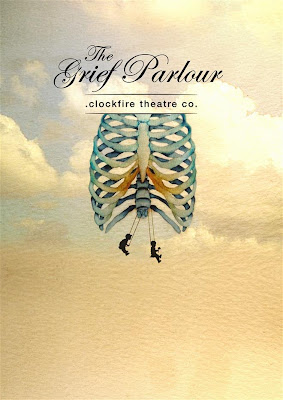 THE GRIEF PARLOUR is a new work devised by Clockfire Theatre Company - a creative ensemble – this work includes the three core members of the group, who have been producing work over the past  year or so, and last year had a residency at the Old 505 Theatre in Surry Hills: Emily Ayoub, Gareth Rickards and Kate Worsley. For this project, exceptionally, they invited two other actors in: Roderic Byrnes and Anna Martin; a Writer: Jessica Bellamy; a Director, Jo Turner; and a Composer, Ben Pierpoint. The Lighting Design is by Sara Swesky.

The project began as investigation of "death and grief", two "inevitable experiences we all must face."  In front of three hinged (wall-papered) screens we meet the employees of a funeral parlour. Three of the staff are quite simply 'quirky' in their interactions: the celebrating of a 'birth' day in the 'death' parlour; the exploration of sex attraction in the morgue are gentle Chekhovian juxtapositions of pleasant humour. The text by Ms Bellamy is deftly and succinctly brief in establishing the characters and the events, aided by wonderfully comic creations of character by the actors: Mr Byrnes, Ms Ayoub and Worsley, a delight. (The text has none of the satirical sharpness of the 'grief parlour' novel, by Evelyn Waugh: THE LOVED ONE (1948) or any of the shock of the subsequent Tony Richardson film (1965), sadly.) A young couple arrive to make funeral arrangements and we discover that it is for one of them - and a surreal journey unfolds for the 'dead' one (Ms Martin) who is escorted by a benign figure (Ms Worsley) to another realm (?) whilst the other (Mr Rickards) learns to deal with the loss. The soft quirky humour of the grief parlour is intertwined with the vivid and wondrous other space incorporating the journey of the 'soul'. The fantastical concoction of this other, and dominant story, in this telling, requires one to either believe in an after-life, or , to allow the whimsical explorations be part of a playful fantasia of invention. It was not difficult to do either: to confirm one's faith or to play make-believe.

Both the leader of this company, Emily Ayoub and the Director of this production, Jo Turner, trained at the Jacques Lecoq International Theatre School in Paris and apply in their creativity for the whimsical world of this production, a technique employing three hinged screens (paravents), where the "dead" one is escorted through a long journey, illustrated with mime skills and gestures, around, behind and in-front-of the shifting, gliding screens. Language is scattered throughout , sometimes in dadaistic bursts, interspersed with the quirky 'real' world of the grief parlour. Strange figures appear and disappear (Ms Ayoub, Mr Byrnes) and all to a gently driving music composition of piano and violin by Mr Pierpoint, (influences of Philip Glass). The lighting is complex and creates the shifting worlds atmospherically. It is seductively intriguing.

The performance is a delight, although the enchanting technique of the work - the use of the paravents - may have preoccupied the creators a little to much at the expense of a deeper, more complex reveal of their initial creative impulse of investigation: death and grief. A case of the pleasure of the form exploration dominating/distracting the artists from a richer content revelation.

Despite the relative lightweight look at death and grief that we are given, there is a kind of 'gallic' charm to the work as a kind of whimsical fantasia, in both worlds. I was charmed, amused and do recommend a visit.