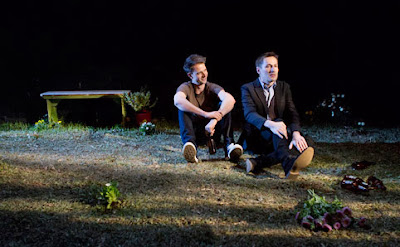 The son (Luke Mullins) returns home after a long self-exile to arrange his father's - an ex-army officer's, - funeral. His estranged mother (Sandy Gore) has been reluctant, and his emotionally disturbed sister (Susan Prior) is unable. The internal politics of this family are askew and volatile, emanating from the death/suicide of an older sister, long ago. The living sister has a husband who has found a way to help her (Paul Gleeson), and the son has found a companion to shield and 'love' him (Tom Conroy).

The writing is contemporary, poetic and firm surfaced, supported by deep motivations both domestic, and of our day, supported by the primal history resonances of characters from Greek tragedy, from the House of Atreus - Sophocles and Euripides.  Mr Brookman has named his characters, Orestes, Clytaemnestra, Electra, Pylades and the tradition of those mythical life forces informs and resonates powerfully the tensions of this work in an almost unbearable heat of storytelling.

The acting is great and feeds eagerly off the writing offered. It is the illuminated power of the 'Greek' heritage of the character nomenclatures that glows and simmers beneath the confrontational conversations of this family, as old wounds and deep secrets attempt to expose themselves. Ms Prior - Electra - is magnificent (as usual) and frightening in her harboured and husbanded grief; Ms Gore - Clytaemnestra - is majestic, resigned and tragic in the steeps of the finite and infinite knowledge of a life lived as she nears the end of mortal carings; Luke Mullins - Orestes - is wholly immersed in the volatile and bewildered son, burdened with the masculine heritage of a family history that is shrouded in unspoken mysteries, and which he must confront and no longer flee. This acting trio is amazing in the complexities that they live for us, and in the compact space of the Belvoir Downstairs venue, the blaze of their convictions and interactions, are aimed accurately, plunged deeply, into our emotional psyches and, I, for one, was moved to tremulous compassion for them, and forced to weep for this family, and my own mirrored family with its secrets, embracing, both the personal and the cultural "family' heritage that Mr Brookman's writing draws from. The cultural echoes of Mr Brookman's play are anything but small and tired.

In contrast the bemused witnessing of the passions of this family by Mr Conroy -Pylades - is deeply empathetic and a sure guide for our, the audience's response, as is the tragic, amusingly named, Jim, played movingly by Mr Gleeson, a suburban everyman trapped into the guise of the good shepherd. All five of these actors, under the clear and insightful eye of the writer/director, Kit Brookman, bring onto the stage not just the imaginative energies to enliven the text of the scenes in naturalistic mode, but are combusted with the life force of deep-long history.

Mel Page, Set and Costume Designer, Verity Hampson, Lighting Designer (Just look at the beauty in the above photograph) and the Sound Design of Tom Hogan serve the work without err. This work Downstairs at Belvoir is of a complete whole. I truly urge you not to miss this production or this writing.

One hopes it plays in the bigger house. The audience able to see this work is severely limited (90 odd per night, or, so - so do book). This space, Downstairs Belvoir has produced some of the best work for this company: BANG by Jonathan Gavin (a co-op production of a few years ago), OLD MAN by Matthew Whittet, and the award winning MEDEA (which I did not see), were three works which regular subscribers mentioned to me in the foyer afterwards and confessed they felt were the more satisfying subscription occasions they had had over the past few years! If these plays/productions had joined NEIGHBOURHOOD WATCH and the Tom Holloway works upstairs, what a weighty heritage it could have shared with a much bigger audience.

Two recent works: THE WESTLANDS and SMALL AND TIRED, both have excited me enormously.
Posted by Editor at 8:06 AM

I agree that the writing is good but I thought the acting very often weak. Much was rushed, external and the actors did not connect with what they were talking about. I thought Prior was particulaly over the top and false. Strange how different people respond to the theatre.

I also was not impressed by the set as I saw another of Kit's plays in Melbourne recently (Night Maybe) and there was a similar live grass set. Enough with the grass, already, Kit.