Stories I Want To Tell You In Person 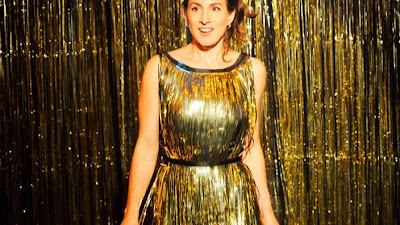 STORIES I WANT TO TELL YOU IN PERSON by Lally Katz in Joe's Pub at the Public Theatre, New York.

Here I am in New York and I discover that Lally Katz is going to give a one night performance of her one person monologue (comic stand-up routine(?)) at Joe's Pub, which is a cabaret space in the Public Theatre building way down town, at 9.30pm, on Sunday night. She follows, into the space, the monologist, Mike Daisey (he, of the notorious, THE AGONY AND ECSTASY OF STEVE JOBS monologue - Sydney Opera House Concert Hall), who, at 7.30pm, on the same night, presented the latest in his monologue series - ALL THE FACES OF THE MOON.

I missed STORIES I WANT TO TELL YOU IN PERSON (directed by Anne-Louise Sarks), at Belvoir, and, so, I, and a young director-friend (Benita de Wit) who is studying at Columbia University, and a whole lot of other ex-pat Australians working in the city - an IT worker and his Aussie actress-wife shared our table - holidayers like myself, and others, including the company of PETER PAN that had just landed in town, to get ready for their Friday (11th Oct) opening, bought tickets and two cocktails (you must buy!) in a plushly decorated venue (about the size of Upstairs Theatre at Belvoir) to catch it, here, in New York.

This monologue, which was developed on commission by the Belvoir Theatre in Sydney and Malthouse in Melbourne, after her failure to produce/write a play on the recent financial crisis/catastrophe (!), has the irrepressible Lally Katz riffing on her life story, revealing her past and more recent biography: American born but growing up in Canberra - I mused, the Canberra 'landing' influence, may go a long way, perhaps, in explaining what is often a kind of unhinged realism - surrealism - in most of her writing for the stage; of her recent play works RETURN TO EARTH (MTC) and NEIGHBOURHOOD WATCH (Belvoir), and the relative monetary security that they had given her; her personal relationship adventures with a "full Jew" in Melbourne; and her interactions with several psychics, especially one called "Cookie", who lives in New York, and may have cursed her; and of two of her 'heroes': Apocalypse Bear (who made an appearance, on stage) and Hope Dolphin (who, only symbolically, did).

It is a rambling piece of seeming recall that is held together by the delightful persona of Ms Katz. She is an ebullient "kook" and has a way that makes everything she says full of a certain kind of whimsy - a self deprecating charm - that helps one to forgive much else about what may be lacking in the craftsmanship of the performance. Ms Katz, in interview, admits she is no actress and will never do it again. - well, we shall see, I guess. For, I reckon, if she developed her stand-up stage technique further, it could rise to the strangely beguiling innocent levels of the great Gracie Allen (George Burns' famous foil and wife) or, evolve into a kind of maniacal sweetness that the two Brewster aunts, Abby and Martha, in John Kesserling's 1941 play, ARSENIC AND OLD LACE, have, (they benignly, for years, have poisoned the old men of their neighbourhood watch with their special potion, 'elderberry wine! -  it is also, a great comic movie - 1944 - with Cary Grant.)

In the cabaret setting at Joe's Pub, this was a pleasant way to finish a Sunday night in New York that began for some of us walking the Brooklyn Bridge at 8.30am! I did wonder, if, in a theatre environment, as it was presented in Australia, whether it would seem too lightweight? Perhaps, too thin, to really justify the occupation of the valuable opportunity of those spaces and time? I, bemusedly, wonder, what Ms Katz would have said about the international monetary crisis - this biographical conversation suggests understanding money and managing it, is not a strong suit of hers.

It didn't matter whether she wrote about that or not, anyway, it seems, for Ms Katz, obviously, has some real friends in the theatre scene in Australia. Ralph Myers at Belvoir and Marion Potts at the Malthouse, at least thought this work had merit enough over other writings (they were both in the audience in New York), to promote this comic monologue on their stages. Or, had "Cookie" been induced to cast a spell on them, so that Lally (Ms Katz) could pay for further sessions with her psychic, to enlighten her, further, about the "full Jew" and her future with him?

STORIES I WANT TO TELL YOU MYSELF, told by anyone else, other than Lally Katz, may not work at all, but, with Ms Katz, is charming, especially, in this cabaret milieu - "TWO cocktails or else", admonished the waitress - and don't forget, in the US of A, it is free pour, as well - wheee! That vodka had a kick! Otherwise, STORIES I WANT TO TELL YOU MYSELF, could be read as a frivolous indulgence of a serious commission, don't you think?
Posted by Editor at 5:22 PM