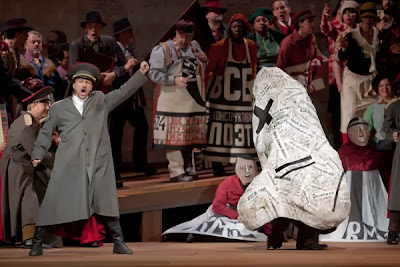 The Metropolitan Opera presents Dimitri Shostakovitch, THE NOSE at the Lincoln Centre.

How could one not take notice of these names, all on the same "bill' and not want to see what they have all concocted: The Metropolitan Opera, Dimitri Shostakovitch, William Kentridge, Valery Gergiev, Nikolay Gogol and Yevgeny Zamyatin? Plus, for us Australians: Alexander Lewis (Who? - the young Australian tenor. Son of Michael Lewis, I think).

THE NOSE is a co-production of the Metropolitan Opera, the Festival d'Aix-en-Provence, and the Opera National de Lyon. It was first presented at the Metropolitan Opera, in 2010, in this wonderful staging by William Kentridge, who is both Director and Designer. THE NOSE was premiered at the Maly Opera Theatre, St Petersburg (then Leningrad), in 1930. Shostakovitch only wrote one other Opera: LADY MACBETH OF THE MTENSK DISTRICT (1935). I am a considerable fan of the music of Shostakovitch and could not pass up the chance to see and hear THE NOSE. Its likelihood of ever been seen in Australia (at least, in my lifetime), seems entirely remote. I had, as well, seen at the Tate Modern, London, earlier in the year, an exhibition of some of THE NOSE designs of Mr Kentridge - the black and white video 'shadow' drawings, that were accompanied with music - in the new galleries there: The Tanks and had my appetite whetted, and was made to be full of longing to see THE NOSE. Lo and behold, my longings brought to a feasting. I had to go.

I had also attended at the New York Museum of Art, in the Spring of 2010, a considerable exhibition of Mr Kentridge's work, which included many stage-box realisations of other designs he had made for Opera e.g. THE MAGIC FLUTE - amazing! Some Sydney-ites may have seen some of Mr Kentridge's work at our own MCA, a few years ago. It was where and when I became aware and acquainted with his work and 'genius'.

Shostakovitch's THE NOSE is based on a short story by Nikolay Gogol (1836), adapted to the libretto by Yevgeny Zamyatin (he, of the dystopian novel, WE (1921), said to have been the inspiration to George Orwell for the novel,1984), Greorgy Ionin, and Alexander Preis - although, the composer himself is said to have had a large input. Both the short story and the adaptation concerns a "Major" Kovalyov, a low ranking government official, who, upon waking up one morning, discovers that his nose has left his face - there is just a flat space! He goes in pursuit of his nose, and actually meets it, dressed as a higher ranking official then himself, and scooting around the city of St Petersburg in a very elaborate carriage. "Major" Kovalyov, thus interacts with a huge cross section of the Petersburg society in this frustrating situation - the work is a satire, both, social and political. The short story is, by the way, extremely funny and wonderful reading.The original defies easy categorising and is regarded by some as 'an absurdist masterpiece'. After much "whoo-there!" adventures, the nose is found to be back in place on the "Major's" face, without explanation.

In the authorial voice, the story concludes:


No, I don't understand it, not one bit! But the strangest, most incredible thing of all is that authors should write about such things. That, I confess, is beyond my comprehension. It's just ... no, no, I don't know understand it at all! Firstly, it's no use to the country whatsoever; secondly - but even then it's no use either ... I simply don't know WHAT to make of it ... However, when all is said and done, and one can concede this point or the other or perhaps you can find ... well then you won't find much that isn't on the absurd side SOMEWHERE, will you?
And yet, if you stop to think for a moment, there's a grain of truth in it. Whatever you might say, these things do happen in this world - rarely, I admit, but they do happen.

Stranger things do happen, don't they? Strange, perhaps, stranger things, do happen in this world, isn't that so? (Don't read your newspaper, if you don't want to know. Where is the young lady from Pussy Riot, for instance?) Shostakovitch writing this opera at the age of 22, in the first warning signs of the flexing powers of the Red Czar, Stalin, and his tightening grip on all things in the USSR, may have begun to sense the 'strange' things that were already about him and what was to emanate, further, personally, to him. William Kentridge sets his production of THE NOSE in the Stalinist period that the opera was written, and the echo from the Gogol satire seems comfortable in this decision, as it may, even for today, if set in Vladimir' Putin's Russia.

The immense proscenium arch of the theatre is entirely covered in a tremendous 'beige-coloured" front curtain, decorated with cartoon, slogans in contrasting depths of black, white and red: witty, pithy and political. Quite some time can be spent on, satisfyingly, reading that work, even before the opera commences. When the opera does begin animated projected figures, slogans mingle with still 'cartoons' across the front curtain enhancing, and being enhanced by the music and libretto. As required, alcoves of location, hinge forward from different, extraordinary positions all over the frontispiece of the design, different heights and precarious angles. Indeed, the scale of this design, dwarfs the human figures on the stage, appropriately. Principal action, also, still, evolves on the floor of the theatre and we change location sites beautifully, wittily without hesitations - the flow is smooth and startling.

The music by this young Shostakovitch is deliberately provoking, much like the original story. Gogol and Shostakovitch seem to be of a pair. It indicates the music experiments and developments of this period (Stravinsky, Richard Strauss, perhaps) and points, dramatically, to the future of 'cutting edge'   music, of today. It is atonal and non-lyrical and has hardly anything for one to take away, humming, afterwards. It may be why the Kazan Cathedral scene is memorable, for the music there is reminiscent of the traditional choral sounds that we are used to (the female voice, sung hauntingly, here, by Ying Fang) and, in contrast, a relief to the general challenge of the score. Much the same, the folk-like song, in Kovalyov's Bedroom, sung by Ivan, a servant (Segei Skorokhodov) to the accompaniment of the balalaika, sticks to one's sense memories. (There is, too, an Interlude in the first act that is simply orchestral, and is remarkable, as it is scored for unpitched percussion). More learnedly, I should quote from the program notes, from Leonid Gakkel (translated by Eyvor Fogart): " ...Dissonance is dominant, classical tonality almost nonexistent, the writing entirely graphic, without the "cement" of chords. The composer employs a principle of montage, without noticeable links or transitions ... " The three acts of the opera are played without a break and this continuous movement propels the drama.

There are over 70 sung roles, some only a line long - the opera is no slouch in making demands of any company willing to present it -and the curtain call demonstrated the strength and density of talent that makes up this incredible contemporary opera company: the Metropolitan Opera in New York. Kovalyov was sung by baritone Paulo Szot (he has sung the title role of Eugene Onegin for Opera Australia) re-creating this performance from his 2010 performances, at the MET. In the role that 'glues' the journey of the story together, he stands stalwartly clear of the 'battles' with the orchestrations he must face, and the busy action of the libretto, and impresses both as a singer an actor. Andrey Popov, a high tenor, also repeating his work from the original showing of this production, is, similarly, attention noteworthy, particularly in the seventh scene where his singing of the Shostakovitch score, demands a sound that has the primal animal sound of "a communal moan". Alexander Lewis impersonating the Nose, generally just a visual character, has many scenes scampering elusively through the action, encased in a very amusing 'nose' costume, has one song, which he gave well.

The experience of the performance, which was the opening one for this season (a Saturday matinee!), was challenging, but engrossing and one I was so glad to have the opportunity to build into my theatre diary-life. The overall impression was the magnificent 'vision' of William Kentdridge, and the provoking talent of the young Shostakovitch. Mr Kentridge was present at this performance, and he and his team took a well appreciated and deserved call. The musical side was directed by Valery Gergiev and was amazing for its detail and sense of comic irony.

P.S. Mr Gergiev is a guest of the Metropolitan Opera, and is also conducting Tchaikovsky's EUGENE ONEGIN, which opened the season with Anna Netrebko. I went up to the Metropolitan Opera on that opening night (23rd September), and the huge courtyard was filled with a seated audience who were to witness the performance as a direct live broadcast. I, accidentally, at first unawares of the significance, became mixed with, a small protest group, from the "Gay" community, demonstrating against the Putin government's discriminations, particularly, against homosexuals, but including other controversial Human Rights issues in Russia. The accident was, personally, a good one, for me, and which I willingly, witnessed. History unfolding in front of me. Both Mr Gergiev and Ms Netrebko are highly public and vocal supporters of the Putin regime - and by association, then, the wretched policies of discrimination. Some of the protesters had bought standing room tickets and before the performance gave further protest in the auditorium - they peaceably left the theatre, under escort, after they had made their point. Peter Gelb, the General Manager, of the company, gave a small speech concerning the matters, both from his personal viewpoint, and, then, for the Metropolitan Opera.

Who believes that opera is not part of the controversial eddies of modern life?