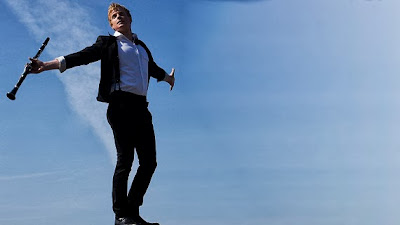 This was, as usual with the ACO, an interesting program of music. The orchestra led by Satu Vanska played a short work by the Finnish composer, Einojuhani Rautavaara: A Finnish Myth (1977); from Russian, Edison Denisov: Five Paganini Caprices: Caprice No. 9.(1985) and Swedish, Goran Frost's: DTangled (2013).

The Finnish work was modern in its sound, full of grating string affects - lack of harmonies - contrasted with a, relievedly, thematic pattern. The Caprice by Denisov was of easier appeal and had enough echoes of the Paganini inspiration to draw one in. Goran Frost's Dtangled introduced the guest artist, Martin Frost, the brother to the composer, and a sublime performer with his clarinet, his virtuosity with it, being only one part of the dynamics of the work. DTangled investigates, for Martin Frost, with his brother, the use of a fusion between music and movement and theatrical lighting. As in his concert visit in 2011, GLITTERING FROST, there is a startling physical life in the performance, fusing choreography, where, with DTangled, a mime and marionette figure meet this virtuoso instrumentalist. Add verbal interaction of self deprecating humour and a quote from his brother-composer:


"From a single spark light is lit. In a single movement time begins. In a single breath freedom lives, air is bent, the note is sung, the movement starts. In one single thought your idea is born."

Seemingly mesmerised, the physical and musical immersion of Mr Frost is a wonder to observe - a servant to the music, each note affecting a response in him, each rhythm a cue to 'dance'- each breath into his instrument a miracle of controlled beauty.

The first half of this concert concluded with an early work by Wolfgang Amadeus Mozart: Symphony No.21 in A, K.134 (1772). It is, part of Mozart's compositional output at the age of 16, and explores the Austro-German, more rigorous, four movement exploration of the Symphonic structure, rather than, the then preferred, Italian tradition, of the three movement form. It has all the lightness of the familiar 'summery' youthfulness that I recognise as a mark of the Mozartian repertoire. I was pleased to hear it, to extend my knowledge of Mozart's invention, but not arrested enough to be more curious of it, than in this hearing.

Nancy and Robert Pallin had commissioned the next work from Melbourne composer, Brenton Broadstock: NEVER TRULY LOST, in memory of Robert's father, Paddy Pallin. The work is described in the program as "a journey through an imaginary landscape, an imaginary 'bush walk' ".  There is space in the musical sounds to allow one to create one's own imaginary, independent 'walk' provoked, urged by the score. This mood work is in tune with the 'adventures' of Mr Frost's theatrics, and has atmospheric lighting cues, and in the playing of this world premiered work, the orchestra is bathed in a deep orange light, that aids the imaginary abandonment to its 'call". Beautiful. Invites reflection.

Finally, Martin Frost, plays the solo role on a basset clarinet, for a rendition of Mozart's, Clarinet Concerto in A, K.622 with the ACO. Mozart, writing this, in the maturity of his skills, his third last  work, before his sudden death, in 1791, explores and exhibits the full advantage of the timbral abundance of the clarinet. The 'possessed' playing by Mr Frost is a wealthy gift for the audience, spectacularly moving, beautiful and rewarding to hear, especially, in the moving second, Adagio movement. The demonstrated skill of contrast in volume and range is awe inspiring and breathtaking in its skill and aesthetic purities - from the crystalline upper register to the husky resonance of the deepest. Mr Frost is an artist not to be ever missed.

An encore, using one of the arrangements of Goran Frost of the Brahms' Hungarian Dances, took us, elated, out to a Sydney Spring day. Another transporting time with the Australian Chamber Orchestra.
Posted by Editor at 12:13 AM