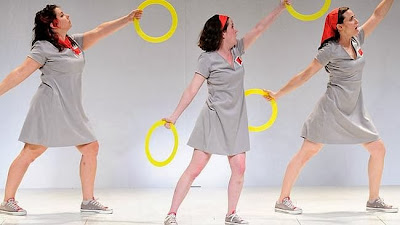 Kelly Copper and Pavol Liska met up while studying writing and theatre at Dartmouth College in New Hampshire, and after moving to New York in 2004, created a company:Nature Theater of Oklahoma - it, adopted from a name of a dubious and promising troop in Kafka's unfinished novel AMERIKA. I first saw this company in 2009 as part of the Sydney Festival, in their work NO DICE. I was won over and have followed their progress ever since. Earlier this year there were some great reviews in the New York Times of their latest work LIFE AND TIMES: EPISODE 1-4. Seeing that it was to be part of the Melbourne Arts Festival this year, it was a no-brainer that I would get down to see it.

The company has an ambition with LIFE AND TIMES, which is based on a verbatim transcript of over 16 hours of recorded audio of one of their company, Kristin Worrall, telling of her own life story, to create a 24 hour/10 play performance. The presentation we saw was the first four episodes, lasting some 10 hours, including interval breaks, covering the first 18 years of her life. The text is an exact verbatim transcription, with all the hesitations and wanderings and digressions of this single person. Filled with simple moments of insight, flashes of half-forgotten friends, events and things, it is like the free wheeling stream-of-conscious conversation one might have with someone, one is getting to love, to know.

Episode 1 begins with her first memories up to the age of 8. The style of performance is that of a musical oratorio, sung, individually, progressively, by all of the company, accompanied by a live, small orchestra. Dressed in a simple uniform costume the singing is fused with physical choreography using rhythmic gymnastic gestures and steps.

Episode 2 continues the remembrance from the age of 8-14. This time, the music is pre-recorded and has a bland musicality reminiscent of the core Disco Beat of the Nineteen Seventies and Eighties! - never quoting a single hit, but, tantalisingly, nearly - while the company are dressed in 'real' gym clothing and 'dance' to the impulse of choreography that does not necessarily have a connection to what is been spoken. The text is full of events and objects that we the audience can personally recall - the effect is one that is nostalgic, humourous and sometimes, deeply moving - reflective.

For both episodes,the setting is a simple narrow white backdrop that spills forward onto the stage platform (the actual company was augmented to a larger chorus with artists from Melbourne for the second episode). The words to the episodes , the text, is projected onto two side screens for us to read.

After the final interval, the audience return to the theatre for Episodes 3 and 4, to find a painted setting for what could be an Agatha Christie amateur theatre production of one her plays (the logic of this, if one wants logic, refers back to the autobiographer's afternoons, mentioned in a previous episode, spent with the mother of a friend, telling her plots from Ms Christie's work and that of Alfred Hitchcock). The company costumed in attempts of recall of clothing (theatrical, or not) of the period, so that the verbatim script is delivered, played, 'twisted' into that of a production in the manner of those works - a'locked-room" mystery play. As in episode 1 and 2, the speech of the telephone monologue is not altered, every word of the original conversation is heard - not a single hesitation (ummmm), laugh, (ha, ha, ha. He, he, he) sigh or pause (...) is removed, smoothed over or reduced in length. The performance justifications to continue to 'play' in the style/manner of Christie is, consequently, inventive and hilarious in the solutions. N.B.The words of the text are also projected on two side screens for us to read, as well.

In LIFE AND TIMES the constraints and hurdles facing the actors, imposed by the directors, demonstrates that chance and freedom as artistic practice can be very interesting, absorbing, entertaining within the scope of defined rules. The tensions raised by these directed freedoms, create, in this case, a means to give the audience an insightful and sustainable way to be engaged, more often than not, in this 8 hour theatre experience. The other two hours were interval breaks, including one, where the company cooked and served us barbecue! - no rest for those wicked actors!

What becomes transcendently apparent as this example of 'endure'-ational performance unwinds, is that this portrait of an unremarkable life, delivered without alteration from an ordinary telephone transcription, has epic proportions, scale and meaning, when placed in this discipline. One begins to see that the words NORMAL or UNREMARKABLE applied to any human being is utterly meaningless, and even, if one were religious, an insult to our maker. This woman's story becomes in the details of its telling, and in the time density of its telling, a recognisable one, a familiar one, a universal one. Value is given to this normal, this unremarkable, this ordinary (and what is more valuable than the commitment of one's time - it has finite prospects, does it not?) - one feels enhanced, and this story of Kristin Worrall is appreciated as worthy in its telling, as say that of a Hamlet, Lear or Cleopatra. Our reward is both, metaphorically, big and little.

There is something for me, great, in the experiencing of an epic performance that has such a huge time scale. Whether it is merely surviving the form of the event that gives one a sense of achievement, or the breadth and repetition of the content that informs and, ultimately, inspires one to see and 'read' the world around one with truly appreciative eyes, it is is a wondrous thing to have had done for one - and we do need to be reminded of the value and worth of every human being, every now and then, I reckon. I laughed. I cried. I found inspiration. I found comfort. I watched. I slept occasionally, perchance, I believe I dreamt. For, I woke, and laughed and cried some more. A lot more, both.  I had a great time. A memorable one.

The originality, the exploration, the daring point of view and methods, the discipline, the generosity of Nature Theatre of Oklahoma is well worth being part of.

If you can find them, do it.

Conceived and Directed by Pavol Liska and Kelly Copper.

From a Telephone Conversation with Kristin Worrall.