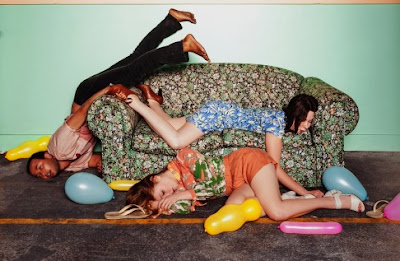 Alex Buzo was an Australian artist in the vanguard of the Australian cultural 'revolution' of the late sixties. His play NORM AND AHMED (1968), directed by Jim Sharman for the Old Tote Theatre Company, became a sensational event, as it explored racism in the Australian context. The subsequent court cases of 'obscenity' around this play became a test case in the battles about censorship in this volatile youth inspired time (Whitlam's government elected in this growing fervour, it seems), propelled Mr Buzo into the, perhaps, unexpected position as champion of the right to speak in our own voices, on the stage. ROOTED was written in 1969, as a follow up to that original controversy in conservative Sydney, and the rest of Australia, and was part of the old-NIDA/Jane St professional season of new plays of that year, encouraged, curated by John Clark and Elizabeth Butcher.

What was interesting in this early work was the focus that Alex Buzo took to the new urban Australian characters, satirising the nouveau-ocker professional aspirants - mixing business-making careers with the hedonistic opportunities of a culture of surf, chicks and partying. THE REMOVALISTS and DON'S PARTY by David Williamson celebrating further what Mr Buzo began here with ROOTED, were still to come.

ROOTED is essentially a portrait of Bentley (George Bander) battling to maintain self-esteem amidst a group of raging 'dick-heads', including the mythic gorgon, never-to-be-seen, leader of the pack, 'Simmo', and losing. In a collection of comic scenes Mr Buzo focuses his perceptive observations of the world of the late sixties, on Bentley, an almost Job-like figure (reminded me of the Coen brothers character, "Larry Gopnik" (Michael Stuhlbarg), in their 2009 film, A SERIOUS MAN) battling what the world is throwing at him, just after he has achieved a comfortable urban Australian-dream success with all the social trappings of a new apartment, with all the newest mod-cons and furnishings, a sexy and beautiful, trophy-like wife, Sandy (Eloise Winestock), and a safe public service job. The script glistens with satiric wit and crackles with irony. The language is crisply and accurately funny and often fiercely cruel. Last Saturday night, in the theatre, it was fun to remember the vernacular usage of those past years.

My experience of the night was to appreciate the character drawing in its sketch-like accuracies and the zing of the language - although, in truth, not all the acting managed to overcome the challenge of the written characterisations, to flesh them out, in any depth. The plotting, ultimately, became repetitive and so the play seemed to become rather static, becoming an extended revue-like sketch, that Mr Buzo didn't know how to develop. It went on far too long - time extended and I found a surfeit of it, to observe flaws in other elements of the production, without losing my way in the events of the play. Or, is that the directorial decision to present ROOTED, a two act play, in a one act, no interval version of 1 hour 45 minutes? One can only laugh, without rest, for a certain length of time without wearying and becoming desperate for a break, especially as there is no story stakes, narrative going on, to hold one's concentration on the verbal action. I was left, at the resolution to the play, more than faintly disappointed. Deprived of a satisfying cathartic 'revenge' perhaps?. I felt sorry for Bentley.The social satire of this play had echoes of a more successful writer in this genre, Alan Ayckbourn (see, ABSURD PERSON SINGULAR (1972); or, ABSENT FRIENDS (1974)). I remember the original production with Jeff Kevin, as Bentley, in 1969, and having a similar feeling of dissatisfaction.

However, the reason to see the production, is to see the impeccable creation that Mr Bander has made of Bentley. It is an outstanding comic invention of some skill and conviction. He certainly sets the tone for the other actors to reach and be measured by. One believes the ridiculous escalating disasters of his Bentley's situation without too much flagging exhaustion at the extended repetitiveness of the schematics of the writing. Mr Bander's insights and delivery of this difficult character is exceptional.

Phil Rouse, the director has found the style and musical rhythms of the material, and directs his cast with a sense of those stylistic needs. He has orchestrated the music well, if not always found ways to people the Buzo characters with a deeper or truer reality than clever caricatures, in the manner that Mr Bander has found. Timothy Potter, as Gary, has created, relatively, a recognisable human being and Bec Barbera as Diane, as well. While, Niyat Berhan is essentially interested in how funny he can be without anchoring the opportunities in accurate character study. A fairly superficial investigation of character. Ms Winestock has a general comprehension of Sandy, but lacks consistent details and therefor our belief in her. She generates little motive for Sandy's behaviour and so one finds it hard to believe in the character.

This production directed by Phil Rouse suffers from a design execution - wobbly flats and doors that lead to nowhere, (Anna Gardiner) - and naturalistic decisions that are logically ill thought out - e.g. an oft mentioned stereo system without a turn table, which the sound design (Phil Downing) keeps re-iterating to us is present. Whatever the said era, supposedly, it is set in, the properties are not very accurate to either then or now, considering the economic class of the characters, and stand out as problematic for belief in the production; the glamorous and consistent make-up appearance of Ms Winestock, no matter the time of day or occupation, e.g. Sandy is wearing those sparkly dress earrings and immaculate coiffure despite the fact that she has just risen from bed and a night of sleep in the very first scene! When, what time of day does one wear a cocktail dress, do you think? The decision to set the play in the 'today' really does not make much sense considering the language and cultural concerns, or,add up to any real advantage.

This is an early play from Alex Buzo, and although one appreciates the verbal skills, it is the later stage work of say, MACQUARIE (1971) and, BIG RIVER (1985) that I admire more - at least for their scope and character truthfulness. Each to his own, of course.

This debut production by this emerging collective Don't Look Away, whose stated aim is "to give new life to the rich history of Australian playwriting by presenting engaged, imaginative contemporary stagings of forgotten works by great Australian playwrights" ought to be encouraged. The final statement, of, I suppose its mission declaration in their program notes, declares: "If you care about Australian theatre, its past, its present and its future: DON'T LOOK AWAY." So, maybe go along and see what you think about a rarely performed play by an important writer from the recent past.
Posted by Editor at 5:37 PM