Summertime in the Garden of Eden 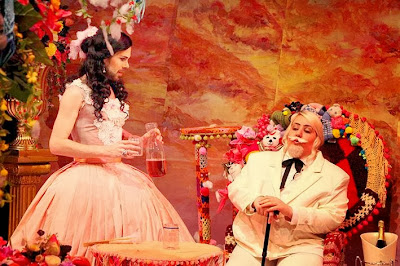 Sisters Grimm and Griffin Independent in association with Theatre Works present SUMMERTIME IN THE GARDEN OF EDEN at the SBW Stables Theatre, Kings Cross.

Recently, while cogitating on the Belvoir production of HAMLET I formulated what I believe is the priority for a successful collaboration in the theatre (and, I believe, in the other mediums, too.):

In the time of Shakespeare that was the priority, and, I still believe, is more often than not, the best formula (in fact there used to be no director, that role, being a relatively recent invention.) The writer is the most important asset  (- enough, I say, of good actors making silk purses out of pig's ears!) Without the quality of writing it is an uphill battle to get a work to work - not impossible, but, considerately more difficult, and a kind of artistic sacrifice of the actor - who has to breathe life into the works every night, or, have it permanently on record, in the Film and television world - ugh!.

SUMMERTIME IN THE GARDEN OF EDEN, the text by Ash Flanders and Declan Greene fails at the necessary, first priority. And at the second as well.

Earlier in the year this company presented LITTLE MERCY at the Sydney Theatre Company and in it paid wicked, and funny homage to the BAD SEED genre of Hollywood film. The writing, there, appeared to be very assured and inventive. SUMMERTIME IN THE GARDEN OF EDEN indulges in what the creators note:


Unlike most homosexuals we identify with headstrong, fallen women of the past. And for this reason, the Southern antebellum epic - in all (its) lush tragedy - is exactly where our hearts beat.

Civil War Dramas, Historical Romances,and the Southern Gothic Literature is the resource, treasure trove, for this foray into 'campery'. JEZEBEL (1938); GONE WITH THE WIND (1939); THE LITTLE FOXES(1941); HUSH ... HUSH SWEET CHARLOTTE (1964); the poetics of writers such as Tennessee Williams, Truman Capote surface in the writerly tone here, too, at their most suggestive sense of Southern decay, with added spice from the sexual transgressions and 'fascinations' of works like, perhaps, the MANDINGO (1964) series of films, based on the Kyle Onstott novel, and recent memories of work such as John Berendt's MIDNIGHT IN THE GARDEN OF GOOD AND EVIL (1994 - movie 1997 - the Lady Chablis!!! makes her memory mark, here, in the casting), even, perhaps,  Tarantino's DJANGO UNCHAINED (2012), is relevant.

The Creators tell us in their program notes:


... adapting this genre to the stage in 2013 presents a range of challenges. Many of these texts feature incredibly problematic representations of gender, race and sexuality... for they represent examples of historical sexism, racism, or homophobia that can't be buried or suppressed or censored ...

especially, in these times of acute political correctness. The authors signal an awareness of the difficulties, but do not do much more than, devotedly, pay homage to the melodramatics of the works in an extended sketch, that was, for me, highly reminiscent of the Carol Burnett Show of yore - those hilarious sketches that  were , of a length, not much more than 10 minutes. Is it that, that made them work - brevity, being the soul of wit? The experience of this writing, is then, of strained and stretched amusement, a campy love letter to the genre, and not much more. Extended beyond my interest - by some 60 minutes!

That the Director, Declan Greene, has cast a group of performers, in a cross-gendered way does not really bring 'political' content of any real clout to the work. Two Melbourne drag artists, in the principal roles, Olympia Bukkakis as Honey Sue Washington, and Agent Cleave as Daisy May Washington, unfortunately, do not bring much more than a disciplined drag artists' flair to the characterisations. Mr Greene has held their expected skills in, within a fierce dead-pan style ( though they burst-out now and again with lip-synched song and dance routine), recalling vividly the melodramatics of the actresses of the B-grade film world that the Sisters Grimm revere (Bette Davis, Joan Crawford Lana Turner etc.). These two artists wear exaggerated, decorative crinolines of the period with casual familiarity, especially, deft in circumnavigating the tiny and crowded space of the Griffin stage, with those wide hoops, designed and decorated with a witty imagination by Marg Horwell (by far, the design, the best contribution to this production). The balletic swan-like waving of arms and hands of Ms Bukkakis is the most deft effect of 'her' foray into creating character, while Ms Cleave appearing in full crinoline and black beard does not have the necessary and vital attack to 'her' text to help us suspend our disbelief in it being anything more than a night at a more than unusual 'serious' drag show. Bessie Holland, as Big Daddy, has a firmer understanding, if not much real sophistication, in her work, while Peter Paltos as Clive O'Donnell is the only real touchstone to the style and political target (tragedy, perhaps) of the work. Genevieve Giuffre as the puppeteer to a 'gollywog" as Mammy, the supervisor of the daily workings of the cotton plantation, "Fairweather", comes nearest to a thrill of the daring outrage that this work might otherwise pretend to cook - my North American friend, beside me, was a little uncomfortable with that flaunted cultural taboo, exhibited with such comic abandon.

SUMMERTIME IN THE GARDEN OF EDEN when compared and contrasted with the recent summer success of the Sisters Grimm's other work, LITTLE MERCY, pales beside the writing skills of that work, and most certainly against the acting skill and confidence of Ash Flanders (soon to appear as Belvoir's Hedda Gabler in the Ibsen text, next season!), Luke Mullins and Jill Mackay. Is the writing not up to the same level, or, is it just the disparity in acting skill that can't transcend/lift this writing into a sublimely comic experience? Both, I estimate. For, although the Design possibilities, on the Griffin stage, is limited in its facilities compared to the scale of invention and budget down at the STC, Ms Horwell creates a space of a spectacularly amusing camp invention - responsible for the best visual joke of the night - the resurrection of Daisy May from the depths of the 'cotton' pile that covers the floor (it was, unfortunately, all down hill from there, for me.) The Sound Design by Russell Goldsmith, uses musical memories of the Hollywood style, to some effect without much craft, while the Lighting Design by Katie Sfetkidis provides beauty and pragmatic support for the work.

It is interesting to see the Sydney mainstream companies responding, obviously, to the Queer theatre tradition, at last. It's influence has been around for ever - mostly in closeted-code, of course. There are, however, vivd memories, of Sydney 'glory' years stirred, with the Sisters Grimm works, for some of the knowing audience, recalled, incidentally, so promisingly in Brent Thorpe's Mardi Gras show TOO OLD FOR TV earlier this year, memories such as: Reg Livermore and his Betty Blockbuster spectacles; Lindsay Kemp and Michael Matou's separate companies; the Garibaldi Club; The Stranded Club in the Strand Arcade (now, lamentably, a JB Hifi store); The Club Bent extravaganzas; the curated work by Victoria Spence at Carriageworks and elsewhere: QUICK AND DIRTY, for instance. Who will ever forget the recent invention and cleverness of Matt Stegh, Matt Hornby and Justin Shoulder in their creations of DICKY AND DICKY? or, the sheer abandoned joy of YOU LITTLE STRIPPER at the Red Rattler, not long ago, and the weirdness of Mr Shoulder's THE RIVER EATS, this year, at Carriageworks?

The Sisters Grimm, Mr Flanders and Greene, have arrived from Melbourne in Sydney, at a fortuitously 'fashionable' time, for their 'thing', for they have much work with Sydney's mainstream companies in the new year. They have become, undoubtedly, fashionably chic. It is then, a caution, I reckon, that the flash and dash, the outrageous fun of performing in an underground car-park, where SUMMERTIME IN THE GARDEN OF EDEN originated, is not enough to create more than a camp laugh in a kind of Christmas pantomime offer in the theatre, without more writing and casting care and thought (the Design - the wrapping, has, as with most drag shows, had, of course a proper priority of attention!).  One does long that these two artists who have achieved such opportunities to show their creative efforts in such prominent spaces could take on the responsibility of those opportunities with a more agile and confronting political nous. The work of Charles Ludlam and Charles Busch come to mind as role models. In fact, it was Mr Busch's PSYCHO BEACH PARTY at the Bondi Pavilion, for the Rock Surfers, that brought Mr Flanders, Ms Guiffre and Mr Paltos to my grateful attention.

Finally, I hate being the wicked 'fairy' at this party, especially, if I consider the response this performance received on the night I attended, a kind of rapture , but, SUMMERTIME IN THE GARDEN OF EDEN is only ok, nowhere near the quality of effort we have already seen from this company. It palls quickly, except, perhaps, for those of us who are fashionably chic or novice to this kind of work - it could be, for the 'innocent', or young,  an outrageous and fascinating experience. I was disappointed and over it, ten minutes in - and there were still sixty minutes more of it 'to look at'.

Of the above formula for success that introduced this Diary entry, only that of Design (Producer) passes muster. And, to be sure, in this case: "All that glisters is not gold..."
Posted by Editor at 12:10 AM