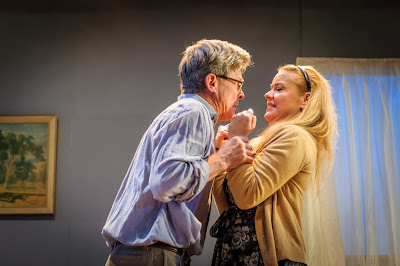 SWEET NOTHINGS is an adaptation by David Harrower (2010) of the Viennese writer, Arthur Schnitzler's play, LIEBELIE (!895).

Arthur Schnitzler first came to my attention with the National Theatre's production of his long, sexually sophisticated play, DAS WEITE LAND (1911) translated/adapted by Tom Stoppard, in 1979, as UNDISCOVERED COUNTRY, at the National Theatre in London. REIGEN (1897) I have known as LA RONDE (have seen many times) - a ten scene set of duets of sexual hijinx across the class structure of Viennese society, ending with the pair it began with, and was banned, proving to be unprintable for several years and unplayable on stage for many more. It was adapted in 1998 by David Hare as THE BLUE ROOM. Stanley Kubrick's last film, EYES WIDE SHUT (1999) was drawn from a Schnitzler novella, TRAUMSPIEL - a sophisticated tale of the sexual dreams/fantasies of a married couple. I have had an interest in his writing, then, for some time,(including, especially, the long story, LIEUTENANT GUSTL (1900), a stream-of-consciousness exploration of the mortal anxieties of a boastful Austrian officer who, like Fritz in SWEET NOTHINGS, is facing a duel he has provoked), and have always felt it had some of the intuitive observations of human behaviour that one can observe in Anton Chekhov's work, especially in his short stories - I find it interesting that both writers were trained as doctors, and writing at the same time, different countries, of course. (Bulgakov, is the third doctor of this triumvirate, for me - THE WHITE GUARD)

Schnitzler's work, created in Vienna as the nineteenth century was coming to an end, had a sexual frankness and insight that even impressed his friend Sigmund Freud: "I have the impression that you have learned through intuition - though actually as a result of sensitive introspection - everything that I have had to unearth by laborious work on other persons." It was also the focus of much criticism, such that he became infamously known as the "pornographer" - and, certainly, his extensive diary, further confirmed his extensive personal appetite, that could be interpreted that way. His expertise, acknowledged by all, not just his detractors, was carnality. Schnitzler made no apologies for his artistic concentration on love, death and play: these eternal three, he wrote, contain all the world, all its meaning and soul. But the first of these three was love, sexual love. (1)

In SWEET NOTHINGS (LIEBELIE) two soldiers, upper class gentlemen, have been adventurous 'buccaneers' in the 'battlefield' of sex. Fritz (Graeme McRae) has been having an affair with an unnamed married woman - a woman described in the play, only as the woman in black velvet (an omen of death?!). As the play begins, it appears that he fears that his affair has been discovered by the husband, and Theo (Owen Little) his friend, awakes him from a nightmare dream (premonition) to prepare him for the arrival of two working class girls, of a recent brief acquaintance, to entertain them, distract him. Mizi (Clementine Mills) is a perky sexually louche young woman out for a good time, accompanied by a more sensitive and, perhaps, naive companion, Christine (Matilda Ridgeway). After eating and drinking and teasing, they pair off into a raunchy reckless abandonment. It is disrupted by the arrival of the Husband, returning Fritz's letters, and who seeks redress. He is offered a duel - it is accepted. Christine, mistaking Fritz's interest in her as love, obsesses indulgently about Fritz and subsequently builds a fantasy out of Fritz's attentions, which maybe no more, for him, than a means to distract himself from an impending duel, that he feels sure, will be fatal to himself. Indeed, Fritz is duly dispatched in the duel, and Christine discovers that she may not have been his true love. Her frenzied reaction is extreme, her childish infatuation confirmed.

What sounds like a simple plot, is a delicate expose by Schnitzler of the difficulties of carnality when the bourgeois confabulations of it, cannot distinguish between love and lust. The subtleties of this play are mostly lost in this production. There is no real acting going on here, rather, broadly indicated, demonstrated storytelling with a penchant to melodramatic/comic gesture, both vocal and physical, and juvenile sexual indulgences. Mr McRae as Fritz attempts to reveal the undertows of Schnitzler's intentions but in the face of superficial caricaturing from Mr Little, who attempts not much more than impersonating the lines, with no sense of "back story" complications or depth, other than his use of, I supposed, his own personality; and a romantic 'face pulling' set of pained smiling masks by Ms Ridgeway as the chosen clues to the depth of her characterisation, while moving with implacable selfish aim to a clearly targeted tragic 'turn' of hysterics for her act three climax, he can only, gallantly, fail. Ms Mills is the next best performer to watch, she shows some marks of the restlessness of a disenfranchised woman, in a society where her sex is her only recognised power. Mark Lee (Weiring) and Lucy Miller (Katharina) attempt to give some ballast of reality to anchor the world of the play, in the second act, but too, are either misdirected or indulged in some of their 'readings' and climatic choices.

The Set Design by Sophie Fletcher is clumsy and not clearly indicated - it is not of any consistent recognisable period, and what with what appears to be an Australian landscape on the centre wall of Christine's parent's apartment, the location is hard to decide upon, as the language references are decidedly at odds with what one sees (a lot of Austrian in the text, not much Australian culture, that I could detect). The costumes as well, do not assist us as to period or location - it is all a bit of a misdirected, puzzling mess - neither, there nor here, then nor now. The Lighting by Hartley T A Kemp or the Sound Design/Composition by Marty Jamieson had much effect in informing my attention, either. I may have just, gently, given up, progressively, over such a disappointing production and was blanking out!

John Kachoyan is the Director. This may not have been his "cup of tea" ("glass of champagne!") Some of them, productions, as I well know from experience,  just get away from one. Arthur Schnitzler is rarely performed in the English speaking world and may be, just too "Je ne sais quoi" (an indefinable something), for this company - much like a lot of French comedy when translated to English,  Jean Anouilh, for instance. At least, I thought it was, on the night, I attended. I, certainly, prefer the Tom Stoppard adaptation of this text, DALLIANCE (1986), to this one, SWEET NOTHINGS (what an accurate title this proved for me), for the Old Vic Company by David Harrower.