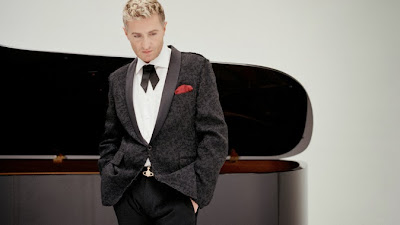 Wanting some music in my life, again, and reading publicity around the pianist, Jean-Yves Thibaudet, and enamoured with the composers Dmitri Shotsakovich and Sergei Prokofiev, and curious about the classic symphonic work of George Gershwin, who I know mostly as a popular song maker of the 'twenties and 'thirties of the last century – I went to this concert at the Sydney Opera House.

I have a conscious appreciation of my being a kind of Russophile, (dangerously imperilled by present history - Putin, and his government, - I am terribly conflicted about promoting the culture), and so this all Russian Concert was attractive to me. All Russian in the sense that Gershwin was born Jacob Gershovitz, son to Russian Jewish emigrants, in 1898, brought up in Brooklyn, in the United States of America.

Shostakovitch as a young man played accompaniment to film performances and was famous as a rapid and accurate sight reader of music. He, also, had an insatiable musical curiosity and had become fascinated by the jazz music idioms that began to infiltrate the dance band music in the Capitol cities - despite the fact that it was regarded with suspicion and hostility, in the Soviet Union power echelons, as a residue of bourgeois culture and decadence. In 1934, Shostakovich agreed to participate in a jazz-commission whose declared aim was to raise the level of Soviet jazz from popular 'cafe' music to music with a professional status. A competition was organised in Leningrad, and to encourage others Shostakovitch wrote his three movement JAZZ SUITE NO.1. This short eight minute, or so, piece written for eleven instrumentalists, was the first piece played by the Sydney Symphony at this concert. It hardly corresponds to the accepted understanding of jazz but has a brilliance and wit reflecting the exuberance and decadence of the 1920's; some of the driving orchestration recalls the 'musical-push' of Kurt Weill works: THE THREEPENNY OPERA (1928), THE RISE AND FALL OF MAHOGANY (1930). The use of an Hawaiian guitar (in this performance, a banjo was substituted) is hilarious and a wonderful pleasure to experience in this delightfully playful composition. I had heard it before and had, in my relative ignorance, anticipated the Piano Concerto No 1, one of my favourite musical compositions. Whatever the immediate disappointment, it was ameliorated with the playing by the Symphony orchestra of this smaller work.

The second item of the concert was the George Gershwin Piano Concerto in F, written in 1925. The Concerto featured the luminous artistry of Jean-Yves Thibaudet. In three movements, the musical melodies and rhythms are redolent with the throb of the city traffic of the great American cities (particularly, in my imagination, as I listened, I recalled the documentary footage of the twenties and thirties New York traffic.) I sat behind the orchestra and was able to enjoy the physical efforts and cuing of the guest conductor, James Gaffigan. Gershwin had written it for Paul Whitman's big band, and the symphonic arrangement, that we heard, was extremely robust in its sound. Interestingly, Thibaudet has made a recording of the work using the original Big Band scoring, and not the full symphony orchestra one. That Gershwin died so young, aged 39, in 1937, not long after the premiering of his last major work, the folk-opera PORGY AND BESS, does give one a keen speculation concerning what may have been achieved if it had been otherwise, for this Concerto is an exciting excursion into this 'classic' musical expression. Mr Thibaudet gave an encore of an orchestral arrangement: Variations on "I Got Rhythm".

After the interval Maestro Gaffigan led the orchestra in a rendition of Sergei Prokofiev's Symphony No.5 in B flat, OP 100. Written in Russia and premiered in January,1945, it became a symbol of the change in the struggle in the war, as the Russian troops expelled the German invaders into a retreat from their country - if the cannon-fire was announcing the turn of the war's tide, the symphony announced a new beginning - even with Stalin still in control. Written in four movements, the sounds are heroic and stirring - the sheer body of the "noise", the shifts of tempo, and its variation of the forces in use, not always predictable, kept one attentive - gripped. The hyperbole of a fellow student of Prokofiev, Nicholas Stonimsky, writing a description of the Fifth Symphony encapsulates the emotional affect of the work: of the last climatic moments:


…an apotheosis, marked by an ovation of trumpets, an irresistible advance of trombones, and the brandished oriflamme of horns reinforced by a cotillion of drums, and nailed down by a triumphant beat of the bass drum.

One can feel the shakes and blasting of the might of the mechanics of warfare, in Mr Storimensky's description and certainly from the Prokofiev score.

A rewarding evening in the Concert Hall.

P.S. Cheerfully, walking down the hill to home, after the bus ride from the concert , I, idly, calculated that the Sydney Opera House Trust must earn something between $4 to $6 million dollars a year with this tax on the performance going public! Is there an official statement of record of the amount of income that we all contribute too, with this "tax', with every purchase we make, over the counter?
Just curious.
Posted by Editor at 10:00 PM

I caught this concert at its Saturday matinee presentation. Just want to add to the impression you justly give of its richness that M. Thibaudet gave an encore of exceptional generosity. The usual practice at symphony concerts where there is a guest artist is that (if you're lucky!) there is an encore of two or three minutes' duration - a musical after-thought or bon-bon; it might take you to some place of spellbinding melancholy; it might lift you unexpectedly to a point of unexpected joy. At this concert the encore involved the whole orchestra and went way beyond the usual time restrictions, as M. Thibaudet threw himself into a series of playful and surprising variations on a song that surely would have had Ethel Merman - a famous interpreter of it - busting to sing along with.

The banjo didn't substitute for the Hawaiian guitar. The part is a doubling one, with the banjo player taking up the Hawaiian guitar only in the third movement. Surely you heard that wonderful, distinctive, smile-making sound in the foxtrot? :)