The Dreamer Examines His Pillow 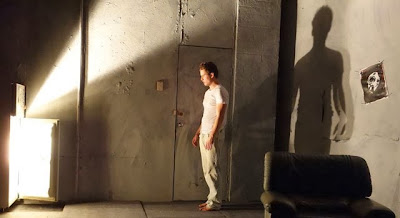 In the hurly burly of Christmas and end of year 'madness', some work in the theatre gets overlooked. This, now closed, production of an early John Patrick Shanley play, THE DREAMER EXAMINES HIS PILLOW (1985), at the Tap Gallery produced by a new Independent Company, Unpathed Theatre Company, is such a one. Most of us could pinpoint other Shanley works: DANNY AND THE DEEP BLUE SEA (1983) - a favourite of young actors into emotional angsty, violent relationships, and, so, of course, often resurrected for the thrill of tackling those pyro-technics (more often than not coming to grief) - FOUR DOGS AND A BONE (1993), similarly embraced, by some, and, of course, DOUBT (2004), both in the the theatre and in the cinema (Meryl Streep, Amy Adams and Philip Seymour Hoffman - 2008). The 1987 movie, MOONSTRUCK, starring Cher and Nicholas Cage, which won Mr Shanley an Academy Award, also sits in the memory banks of some of us. Mr Shanley has a very large catalogue of work in theatre, film and television and was given, in 2009, the Writer's Guild of America, 2009 Lifetime Achievement in Writing.

When asked to attend THE DREAMER EXAMINES HIS PILLOW, I approached it in a state of mind filled with trepidation about having to watch an over heightened Italian-Irish clash of temperaments in a war between the sexes of a kind of sadomasochistic colouration (horrible flashbacks to sitting through too many scenes from DANNY AND THE DEEP BLUE SEA, for sure). And this is what I did see - well, a version of it, to be sure. However, the acting, directed by a newcomer Vashti Pontaks was of a very high order. Ainslie Clouston, as Donna, appeared in a striking physical dynamic, with a dialect of stunning accuracy that created an immediate believability and identification to a character in psychological and emotional crisis, matched by an equally mesmeric and beautifully detailed, physical and vocal, performance of her lost young man Tommy, played by Scott Lee. Balancing the relatively naive world view of these two youngsters, Donna and Tommy, Mr Shanley, introduces a father figure, speaking from a life well-lived, handing on the hard earned wisdom of that life, Dad, played by Peter McAllum. All three actors give very clear and empathetic, but, not overtly indulged performances that caught one up into a maelstrom of sexually palpable whirlwinds of debate around reasonable fears of personal relationship dangers struggling with powerful instinctive, biological attractions/needs. The debate by Mr Shanley is verbally dense and emotionally heated and cannot bear any relaxation in the tensions of the human urgency of its dilemmas. The energy of this company never flagged in the pathways and obstacles that Mr Shanley had given them and so, the experience in the theatre was, indeed, compulsive viewing.

There is great economy in the simple two room set design by Tom Bannerman, rich in its suggestiveness of location, supplying only a single lounge chair as furniture, which forced the actors into a heightened style of delivery, almost operatic in its 'play to the front(s)' stylisation, lifting the material from naturalism and into a kind of surreal world of dreamers. Joshua Vozzo, the Lighting Designer, created, supportively, the visual intentions of Mr Bannerman and his Director, Ms Pontaks. Well done by him, considering the limitations of the space, whilst Jed Silver has created, made, a very exciting and sensitively suggestive Sound Design, propelling us into a constant state of immersion - an excellent contribution.

THE DREAMER EXAMINES HIS PILLOW belongs to that American tradition of playwrighting that sits in the plump cushions of the Freudian/Jungian couch - you might be able to name other psych practitioners of more recent cogency! - for us dreamers to examine our pillow on/in; a kind of staged public psychological therapy session, where the writer with flourishing poetic licence seems to be writing very definitely from 'what HE knows'.  One feels that someone (everyone) is "in treatment", even us the audience/fellow dreamers! The personalised trauma of the language in this play, identified by these actors (although I do think the play is funnier than they delivered) and played in this heightened style, becomes a kind of glorious poetry that did give the play a balloon of majestic and potent importance. What appeared to be an angsty plebeian, cultural struggle between the sexes, on the page, became, through the impassioned ownership of the language of these characters by these actors in action, a vehicle to lift the play, on the stage, to an elevated perception of the human condition, and its expectant pursuit for happiness forced by pre-destined biological needs (glimpses of Shaw's MAN AND SUPERMAN: Anne Whitefield and Jack Tanner recreated in very modern form as Donna and Tommy), despite evidence that it is a Sisyphean task of frustrating effort and probable failure: the human race may, indeed, be propagated, but not, necessarily, without a constant cost of pathetic pain to the consummators. Gently guileful , generously gutsy.

I could not help but remember the David Rabe masterpiece, HURLY BURLY (1984), that appears to be about the banal world of the stupidly spoilt of Los Angeles, but through careful metaphor grows, in the theatre (when played uncut and closely to the written intentions of the writer), into a play of major stature of overwhelming power (I have never seen a good production of this play that revealed its strengths, in Sydney). THE DREAMER EXAMINES HIS PILLOW, seems, in this production, to be a work of similar impressiveness. One wonders what other 'treasures' Mr Shanley may have given us that have similar transcendence. As well, I recollected his fellow American writers of this period: John Guare and Christopher Durang - (all three of Catholic upbringing, it seems -very interesting!) not often seen in Sydney, and when presented, are usually, unfortunately, poorly - what treasures do they have to give? There are many Edward Albee plays sitting around that I reckon should be examined in performance, by the way.

So this production, almost, missed (by me) at the Tap Gallery, with virtually unheralded artists in all the areas of creativity, gave me a fillip, I think, to conclude my theatre going year, with an energetic bang that explains the reason and beauty I keep going to those theatre spaces. Discovering some very interesting artists and causing me to take more seriously the work, at least the early work, of John Patrick Shanley, was a Christmas present of some surprise. There may be some real reason, other than sentiment and longevity, for the American Writer's Guild's Award in 2009 to be given to Mr Shanley ( - I am such a cynic! MOONSTRUCK/DOUBT have always been to 'neat' in their  writing to completely win me.) So, glad I went. Can hardly wait to read more of Mr Shanley's work, or see it ,,,

THE DREAMER EXAMINES HIS PILLOW, THE MOTHERFUCKER WITH A HAT and PENELOPE all seen at the Tap Gallery, this year, and, ALL, giving the Sydney theatre experience a boost of quality.
Posted by Editor at 10:38 AM

I totally agree Kevin. I thought it was a wonderful production and saw it twice as a result. Fine acting, directing and design.