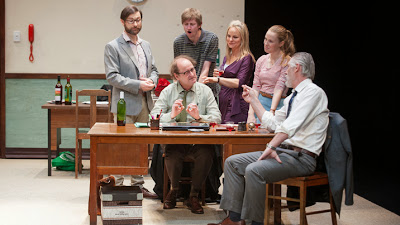 VERE [FAITH] is John Doyle's second play, THE PIG IRON PEOPLE, which the Sydney Theatre Company (STC) presented in 2008, being the first. Says Andrew Upton, the Artistic Director of the STC: John Doyle


... has shaped a play that finds the intersection between theatre, science and morality. The here and now of the stage, the four-dimensional fields and particles of physics, the slippages and illusions of dementia. It all boils down to time and space - how they are bound together and how swiftly they can undo us. ...

The opening gambit of the play is an end-of-term lecture from Vere (Paul Blackwell) to his university class where the range of the possibilities of the human brain in its application to solve and invent everything from the stone-axe to The Standard Model of Physics - even up to the hunt for the Higgs- bosun (the God Particle) - is introduced. This scene (prologue) that seemed to promise much to come - the writing, stimulating, comprehensible - unfortunately proves to be the best writing of the night, by far. The play then moves into a shared university office - properly dingy and probably true - where Vere is informed that he has a 'galloping' form of dementia whose onset is irresistible and speedy, and that his amazing thinking - memory scientific capacity - will be destroyed, with all else - as then, staff and students, arrive for Christmas drinks and a farewell, to the same professor, Vere, to his anticipated, imminent journey to Switzerland to be part of a great research procedure. He does not tell them of his diagnosis and that the likelihood of his ability to travel may be limited, if not cancelled. There follows much under-graduate banter with the drinks - laughter, under the shadow of decline, for us in the audience, to observe. The second act takes us to the family environment, a few months later, where on an occasion to celebrate a coming marriage union, we observe that Vere is now succumbing to the aggressive symptoms of his illness - lucid for some moments, not, in others - mistaking the guests for others, and fearlessly exhibiting his polymath perceptions willy-nilly to the comfort and discomfort of some, or all. His son debating the pro's and con's of Science versus God with the prospective in-laws. Frustrating entanglements of logic etc. occur. Vere, when all of have gone, suicides.

The text has in its layers, debate around empirical science versus religious faith in helping civilisation to find the rules for morality; the position of beetroot in our dietetic social history; and some other things such as dementia and suicide, which may confront some of the audience quite precipitously. Mr Doyle's script is 'brave' in the endeavours to bring this material to our communal attention, but, then, is rather glib in the arguments, and in the representatives he uses to argue the opposing viewpoints - e.g. rabid Christian fundamentalists with such ignorant bias represented, in this text, by the characters of Reverend Roger (played dangerously on the edge of parody by Geoff Morrell and thus compounding the ridiculousness of this serious 'debate'), and his wife, Katherine, played by Rebecca Massey (who, on the other hand, attempts a real empathetic "reading", which, considering the source material, is fairly ingenious). Neither of these characters seem, dramaturgically, balanced (a straw dog offer!) beside the more sophisticated representation, argument resources of Vere. There is a strong tendency for Mr Doyle to find jokes rather than a real discussion of the seriousness of the issues he alludes to by puerile punning and lame jokiness, wrapped in caricatured representations and expected role playing, to set up the comedy - this is more vaudeville, stand-up, than black comedy or farce, or serious debate, and, ultimately, proves to be a comfortable let-off-the-hook and shallow experience. It was, simply, for me, an assortment of 'galoots', rampaging, verbally, over issues of serious contemporary concerns.

It is for some others, moving, and I did see some handkerchiefs dabbing eyes at the conclusion of the performance, and I can vouch that personal histories and fears can make it so - but, for me, the work squibs on the seriousness of its subject matter and avoids real interrogation that ought to make this work's ambitions more confronting considering their contemporary importance. The audience I sat with were, mostly, on the wise side of fifty, have either confronted Dementia in their own family, or, extended family connections, or, are now having to regard, seriously, their personal issues about their own quality of life and the choices to be made about it. When one reflects back to the recent Palme d'Or and Foreign Language Academy Award winner, Michael Haneke's film, AMOUR (2012), starring Jean-Louis Trintignant, Emmanuelle Riva and Isabelle Huppert - a film that deals with disability and suicide in the aged, one can only regret the opportunity missed by this playwright. That euthanasia does not get even a glimpse of mention in this play, appeared, to me, to be odd, if not a profound error, considering the subject material exposed, supposedly examined, and the demographic of the audience likely to see it.

It is a much more interesting work than THE PIG IRON PEOPLE, but, still, reveals, reflects the difference that a television script might allow and be rewarded, considering the prizewinning background of Mr Doyle, that a play in the theatre, will not.

In my Diary entry for SUMMERTIME IN THE GARDEN OF EDEN, I do regard the quality of the writing as the most important element in any enterprise, and of my despair when actors are, relatively, required to invent (create) characters that are not on the page, finding, instead, mouthpieces and caricatures of "sit-com types", to facilitate a series of silly jokes, flirting around serious subject matter potential - actors having to create silk purses out of a pig's ear, is what I called it. Matthew Gregan displays some real skill with his act one character Mike, but has an up-hill battle to do much with underwritten Michael in the second. Geoff Morrell barely resists, and only just, his usual penchant for satiric heavy-handedness as the Vice Chancellor, Ralph, and almost gives into it as  Reverend Roger, in the second act, - avoiding it with only one hair's breath away from an out-right surrender to comic twinkle - neither of his men appear anything more than thin representatives of a skewed authorial point-of-view, ponderously, a comic one. Yalin Ozucelik is not able to find a reality-'keel' for Simon in act one, but entirely succeeds with the overburdened son/father Scott, in act two. Ksenja Logos makes a bland impression with two bland characters (maybe not her fault), while Matilda Bailey misfires completely with both her tasks, she does not differentiate one caricature from the other, except with comic-strip externals of costume and poor, over loud voice work - irritating and unreal. It is Rebecca Massey that makes a hit with both her women, Kate and Katherine,  finding some dimension to their reality and gave, for me, the most consistent performance of the production. Paul Blackwell, as Vere, has a comfortable ease with his physical characterisation and inhabits it with consummate skill - he kept reminding me of Richard Gill, the Australian music conductor - but vocally seemed unable to, comfortably, find a matching truthfulness. I thought there was an over empathetic colouring going-on and was puzzled whether the vocal choices were a deliberate characterisation which sat above an anchored ownership of his text, a kind of 'singing' - revealing  a lofty eccentric, a kind of 'high priest', pontificating with, and at, knowledge as a recitation sound choice to deliver regurgitated information - a quality sometimes revealed by totally obsessed individuals: think Cardinal Pell and his 'sound' or Judge Michael Kirby and his, perhaps.

Set Design by Pip Runciman is efficient with a very strange choice of two walls of doors that indicate a promise of farce in the second act - it never arrives (doors have been an obsession for Ms Runciman this year, if the Bell Shakespeare THE COMEDY OF ERRORS set design is recalled). Renee Mulder has designed the costumes well and the lighting design by Nigel Levings fulfills a brief of atmosphere and visibility, whilst the Composition by Steve Francis appeared to be a trifle over stated in its references to a 'spirituality'. Sarah Goodes, the Director, has crafted a very good job of keeping this play afloat, and like the work by Richard Cotterell on Jonathan Biggin's play AUSTRALIA DAY last year does much to camouflage the weaknesses of this text.

This is essentially a play aimed at the middle-of-the-road audience. It acknowledges, rightly and bravely, issues that are of vital importance to that community, but, then, essentially, merely trifles with them. Both, the issues and the audience. Now, when the STC presents Lucy Prebbles' THE EFFECT next year, a play that I admire enormously, creating a moral debate around contemporary health issues, some of you who read me, might begin to comprehend why I am so disappointed with this play.

Others had an uplifting time - I was simply distressed by it all, not just with having to consciously deal with personal issues about dementia and its terrors, but, also with the playwriting. Of this new Australian play, presented by two of the major theatre company's of our nation, as one of the BEST in 2013, and therefore deserving of production in major auditoriums.