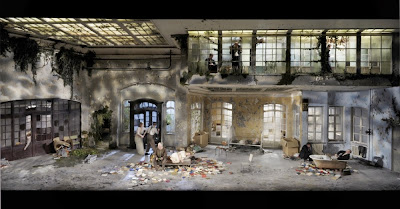 SUMMERFOLK (Sommergaste) by Maxim Gorky presented at the Schaubhne am lehniner Platz, Berlin.

THE RISE AND FALL OF MAHAGONNY (Aufstieg und Fall der Stadt Mahagonny) - an Opera with orchestra in two Acts by Kurt Weill. Text by Bertolt Brecht, at the Komische Opera, Berlin.

This is a very late blog.

Dear Diary. I travelled to Berlin for the very first time, over a year ago, on my way to a Christmas In Sweden - a farm near Gothenburg - it snowed, yay!

Whilst in Berlin, beside the art immersion, not only of the Ishtar Gate variety - staggering - but going to a remote 'gallery' in Kreutzberg to see two costumes that Peaches had worn - whatever! - the artist's explanation in a long scree on the wall, in English, was an essay that I soon meandered from in a kind of delirium, but was rewarded by my fellow travellers and pop fans, who had almost dragged me there, with several delicious creamy cocktails at a bar nearby, followed by a delicious Turkish dinner - I resolved - when these two girlfriends of intrepid instincts - they are at present cycling from London to Sydney on self-made Bamboo Bikes - 8 months down, 10 to go - they are at present in Kazakhstan, yes, on bicycles in the snow! - no kidding, check out their web site BAMBOO ODYSSEY - went home to London - to attend the Schaubuhne, just to go to the 'horses' mouth', so to speak, to see the source of some of the recent influences on some of our young directors, that have been practicing in Sydney, first hand.

I was lucky, besides other work in that one week, I could attend one of seven offers in their repertoire -yes, one of SEVEN. Berlin daily, weekly, theatre repertoire is vast and amazing, I opted for a play I knew in English and had the choice between Maxim Gorky's SUMMERFOLK or Bertolt Brecht's THE GOOD PERSON OF SZECHUAN. The foyer photographs of the Brecht looked forbiddingly too raucously adapted , you know, micro-phones, sweat and awful costume, and I only knew the play from reading and one long ago performance. I have directed SUMMERFOLK, twice, and so, thought I could at least follow it, and the foyer photographs appeared to be a little more period - it gave out vibes of a more intelligible evening.

This play usually has a company of some twenty odd characters, this production had decidedly reduced numbers and, it seemed to be heavily adapted. Written in 1904 the play by Maxim Gorky is a reply, of a kind, to Anton Chekhov's THE CHERRY ORCHARD. It concerns a group of summer folk, bourgeoisie, at their 'gated' summer dachas, debating, not too deeply, wholly theoretically, idealistically on the social conditions, philosophy of the times. Particularly, the Theatre season magazine tells us that this production concerns:


A group of intellectuals (who) are bored while on summer holidays. Lawyer wife Varvara has never felt desire for her bland husband Basov. She projects her secret longing onto the writer Shalimov - and is harshly disappointed. Only her brother Vlas has managed to escape his dreary existence aided by the cynicism and love for the much older doctor, Marja.

Regie by Alvis Hermanis. A spectacularly detailed set design of a ruined house, in the action of being repossessed by nature, covered in creeping moss, weeds and uncared for trees. The invention of the humans, broken and in a state of decay. It is a wonderful design and execution of design - the realism is disturbingly pre-occupying, by Kristine Jurjane. She is also responsible for the costumes. The Lighting by Gleb Filshtinsky supported the reality of the images of the design. Running almost three hours, in German, I found myself getting the sketch of remembrance of the play I know, but little of the details of directorial point-of-view. Some of the choices were odd to decipher and I was constantly in search of narrative connection from what I knew the play to be about, and its construction, with what was being enacted, represented for me. The acting was superb. I had a companion who had never read the play, does not speak German, who had an almost completely tedious time - except, there was a Labrador roaming the set all of the night, and its performance, plus the details of the set design, kept him, mostly, occupied. I know the film of the very famous Peter Stein production of this play, for this company, in 1974, and this production appeared to be antithetical to that work. Revolution, Mr Gorky, from the new bourgeoisie, perhaps.

I had hoped to see THE CHERRY ORCHARD at the Berliner Ensemble, but illness had cancelled the production, for my available night. Instead, then, I elected to attend a performance of THE RISE AND FALL OF MAHAGONNY (1930) - a work by Bertolt Brecht, music by Kurt Weill at Barry Kosky's theatre, the Komische Opera. I know THE THREEPENNY OPERA (1929) well, having understudied for the Old Tote Company in the opening season at the Sydney Opera House, directed by Jim Sharman, and had performed in Brecht/Weill HAPPY END (1928) at the Q Theatre in 1980 for Doreen Warburton. I had also seen the Richard Wherrett production for the Australian Opera in 1982. This production is in modern dress and has a wonderfully flexible design utilising the entire stage space. Revealing itself as an empty black box that becomes cluttered with the many scenes of the work. It is a moral fable concerning unregulated money and law that leads to chaos and anarchy - a reflection of conditions in Germany at the time. What I found very interesting was an appreciation of the no nonsense approach to the performance by these actor/singers. I am not able to elucidate more clearly or credit the artists involved as I am not able to translate the German program !!!! All I can add is that I had a fairly impressive time. Learnt some.

The Komische Opera Theatre is a very beautiful building. It has, externally, a very modern facade, but inside. has very impressive interiors, of Neo-Baroque style. Built in 1892, designed by two Viennese architects, it has housed the Komische Opera since World War II. It is one of the three leading Opera Companies in Berlin and specialises, mostly in light opera. Barry Kosky's latest production of THE MAGIC FLUTE, had just opened, but not playing during the time I was there. Bummer.

There seems to be no other Industry in Berlin except ART. I do recommend a visit. I wish to return.
Posted by Editor at 8:00 PM