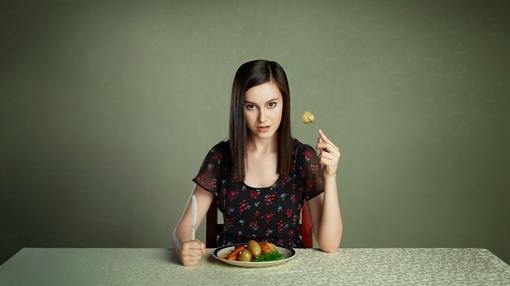 BITE ME is a program of 10 new 7 minute monologues written by young writers involved with the Fresh Ink project managed by the Australian Theatre for Young People (atyp). It is an annual event. OUT OF PLACE was what we saw, last year.

The writing appeared to be, generally, of a much more interesting calibre than previously, benefiting, it seems from the leadership of Australian playwright, Jane Bodie, (THIS YEAR'S ASHES) assisted by Declan Greene (from Sisters Grimm: LITTLE MERCY and SUMMERTIME IN THE GARDEN OF EDEN) and Angela Betzien (THE DARK ROOM).

I had some moments of 'aesthetic arrest' during this performance, particularly, with SWEET IN THE SAVOURY by Tasmin Hossain, performed thoughtfully and instinctively, beautifully, by a very young artist, Angelica Mandani; FOOD BABY by Kyle Walmsley, performed with startling elan and insight to the judgement of the humour, by Julia Rorke; GEORGE by Keir Wilkins, performed by Paul Musumeci with some care; FACON by Felicity Pickering performed with too much movement and an over loud microphone, that distracted rather than clarified the writing, by Kate Williams, and TELL ME by Jake Brain, performed by Joel Jackson, hampered by a divided focus of skills - voice and body. The other writers represented were Emily Sheehan, Julian Larnach, Jory Anast, Sophie Hardcastle and Zac Linford.

I am not a fan of the monologue form as a theatre experience, usually. However, the work here was of interest. Get along and spot the writer of the future. Each of us, hopefully, will champion one, or another. Closes on the 22nd of February.

One hopes that these writers will get to write in a fuller form, with a cast of 4 or more characters, soon. A season of new plays commissioned by atyp, as in the John Clark inspired old NIDA, Jane St. seasons  would be a welcome 'innovation'.

atyp, how about it? Fresh Ink some more.

Anthony Skuse has directed the work and, as usual, has guided the performers to some real place of security. The abstracted set design, by Gez Xavier Mansfield, is beautiful to look at, - lit, by Sara Swersky, with her usual eye for beauty - a nice art installation in a gallery, but providing difficulty of focus for audience seated anywhere but centre. The sound support by Jed Silver serves as an encompassing cover for the integrity of the bits that helps to make a whole. It is interesting to see the solutions evolved by Mr Skuse to give the 10 monologues some coherence, and, as in last year's OUT OF PLACE project, directed by Paige Rattray, choreography is the ingredient preferred. Adele Jeffreys was the movement collaborator. And, as in my impression last year, to the use of choreography, it seemed to me, that there was much too much of it, and that it began to appear to be indulged at the expense of full focus on the writing and acting (did GEORGE, for instance, need the full company to be moving synchronistically throughout the piece? - personally, I was distracted away from the text, with no artistic compensation.)

Mr Skuse tells us in his program note:


We rehearsed for a week in December reading through the texts and playing with ways we could use a table: sitting around it, lying on top of it and crawling underneath it. The table is one of those everyday objects we fill our lives with - like chairs and beds. The simplicity of its form underlies the complexity of its possible meanings. In art as in life the table can stand for family, power and death. Our physical relationship with tables can be expressive of our relationship to life.

"In art as in life the table can stand for family, power and death" !!!!!!! In life, really? In art, I could consider it possible, maybe.

"A bit of a stretch, eh, what? A big bit of hyperbole going on, there, eh?"
"OK, I'll give it a go."
But, finally, wearily, I thought, during and after this production - I thought the table was just that, still, a table, and not a representative of power, life or death in its usage in this context, and, I took solace in another person's remark: "... a cigar is just a cigar."

That we had this pristine white topped table without chairs or ever any FOOD, considering that food was the theme of the originating idea of the writers' inspiration was an oddity- and while still not wanting to be literal, this table came, ultimately, frustratingly, to stand, opaquely, for a directorial/choreographic concept.

DV8 is a company that uses the conceit of practice of combining speech with text, (TO BE STRAIGHT WITH YOU; CAN WE TALK ABOUT THIS), and they have specially selected/auditioned artists, and usually have given much time to achieve the probability of making the spoken word and the choreographed action, seamless, as one - it was a very difficult ask by Mr Skuse to give these young artists. A wonderful task, but beyond the skills and time frame, perhaps of the company - Mr Jackson, for instance, was committed but defeated by the accuracies needed to entwine his movement with his textual responsibilities for clarity in TELL ME - and the primary objective of the exercise of BITE ME was surely the  revelation of the writing (and the acting), not the wrappings of an entertainment dominating, in moved allegories of family, power and death? Yes?

I guess, it is all a matter of taste, really.