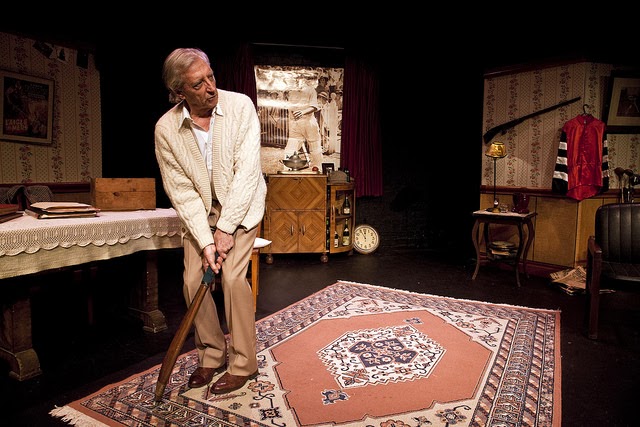 DECORUM in association with the Sydney Independent Theatre Company presents LEGEND! by Pat Sheil at the Old Fitzroy Theatre, Woolloomooloo.

LEGEND! is a one man play by Pat Sheil. It creates a character, 'Slips' Cordon, a grandfather, played by John Derum, who is an anecdotal folk-historian acquainted, familiar, with some of the major figures and events of our last century. The authority for the veracity of his tellings is that of a self-proclaimed eye witness, and "I was there", becomes the running mantra throughout the recollections (the tales of Baron von Münchhausen and George MacDonald Fraser's Harry Flashman seemed to me, to be, vernacularly, of a similar DNA!). Like the Woody Allen creation Zelig, who finds himself present at many turning points of international history, 'Slips' serendipitously has found himself present and involved with the 'legendary' of some of our Aussie past: Don Bradman, Victor Trumper, Francis de Groot, Jack Lang, Pharlap, Dame Nellie Melba, Errol Flynn, Robert Askin, Joern Utzon, Sir Roden Cutler, John Kerr and even John "Jack" Simpson and his Donkey at Gallipoli, are some of the figures that are part of the panoply of the life of this "amazing' man, this LEGEND!

Set in a fully recognisable and decrepit living room of 'Slips' home (no designer credited, though technically supported by a real and mostly, unsung legend, Tony Youlden) surrounded by dodgy-looking memorabilia of his exploits, this shaggy-dog story of interconnected 'authoritative' braggadocio is an amusing, almost subversive, series of good-old fashioned Aussie debunking of some tall poppies of our folk history. Mr Sheil's writing has the familiar audacity of a lot of satiric writing of old, plus, unusually and welcomingly, for me, a sophistication of language usage - most enjoyable (I have just, co-incidentally, read my first P.G. Wodehouse novel, THE CODE OF THE WOOSTERS, and thought, while watching LEGEND!, that Mr Sheil has a similar way with words, words, words, only very, very Aussie-like ones). Think: The Mavis Bramston Show, The "Aunty" Jack Show, or Norman Gunston, or, even the greatest of our satirists, Barry Humphries and his Dame Edna, or, more particularly, in 'Slips' case, of 'SIr' Les Patterson, and you are in the locus of this material. Mr Derum is familiar and comfortable in this piece of bravado, and as time passes will be even more secure, guided with a sure hand from Lex Marinos.

The work is just an hour long, broken with an interval (hardly seemed necessary), and I found myself laughing often. LEGEND! is a stand-up comic routine submerged in a partly fledged characterisation of a familiar type. The work stays fixed in its comic intents and is an easy way to spend some time. I had hoped, during the performance, that it would develop further into a deeper character-play study, in the order of say, the Steve J. Spears' THE ELOCUTION OF BENJAMIN FRANKLIN or Humphries' Sandy Stone. It doesn't, and maybe, I ponder, a chance to give the work a broader, a deeper interest for survival, is untapped. The human empathy of recognition that Mr Derum's 'Slips' encourages in us, stays resolutely in the 'piss-take' larrikin tradition of a lot of our comic writing and performance, and fends off an invitation for us to appreciate a true picture of a grandpa, much like the one at home, maybe, whose memory is decorated with much fancy.

Don't know what to do tonight on a balmy, summer night?

Maybe, a wander down to a comic night, with a beer, at the Old Fitz pub is worth a visit.
Posted by Kevin Jackson at 8:13 PM