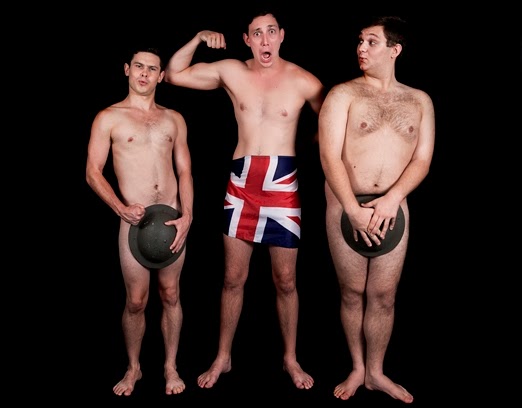 New Theatre presents PRIVATES ON PARADE by Peter Nichols with music by Denis King as part of the Sydney Gay and Lesbian Mardi Gras at the New Theatre, Newtown.

The New Theatre have presented, Peter Nichols' PRIVATES ON PARADE before, some 25 years ago. John Short was the musical director of that earlier production and is again. During the preparation Mr Short brought to the attention of his Director, Alice Livingstone, differences between the text he had worked on then and the present one that they had begun to "solve". In her program notes, Ms Livingstone tells us, that she had read and re-read various versions of the script that exist, and along with her Assistant Director, Mark Croasdale, and Mr Short, have shaped the performance text we see, hopefully, honouring the Peter Nichols' intentions. It seemed to me, having re-read the published Faber edition of the play (1977), Ms Livingstone has done just that, with great credit.

PRIVATES ON PARADE is concerned with an entrainment troupe commissioned by the British Armed Forces, in this case, the fictitious, SADUSEA, (Song and Dance Unit of South East Asia), on tour in post-war Singapore and Malaysia (1948-50's) - this play is partly, auto-biographical, Mr Nichols having been a part of ENSA - the Entertainment National Service Association. It is a kind of tribute to the traditions of music hall, vaudeville, 'end of pier' concerts and panto mixed with acerbic observations of an Empire in tatters and decline - "So could you please inform us who it was that won the war?" patters Terri Dennis, a leading member of the entertainment company, in Noel Coward mode. " ... Could you please inform us how we came to lose the peace?"

Within the nostalgic and glowing homage to theatrical traditions of the past, the 'body' of the play reveals the prejudices of a culture that is in desperate need of 'renovation': the political arrogance of the Forces of Empire and the antiquated attitude of the rightness of the missionary zeal of Christianity,  capitalist corruption, racism, sexism and homophobia bristle, with uncompromising and unbridled political incorrectness throughout this text - a contemporary audience may find themselves squirming with the blatant beliefs that our parents/grandparents once cherished - the BLACK VELVET song, for instance. The tone of Empire and Commonwealth values, struck pertinent chords of unfortunate personal memory for me, having been a child of the nineteen -fifties. The musical satires and 'political  observations' are leavened, harnessed with the melodrama-soap-opera plot machinations, concerning the ordinary lives and needs of the real soldier characters of the Song and Dance Unit, living in extreme and unfamiliar circumstances.

My memory of the recent Michael Grandage production of PRIVATES ON PARADE, which I saw in the West End, last year, was that of a play with musical numbers, whereas Ms Livingstone's production frames the play within the make-shift proscenium of a touring variety theatre (Design by Alan Walpole), and is rather a kind of variety show, with direct monologues and letter writings, intruded by real life dangers and complications.

The company of actors have been drilled and choreographed (wonderfully byTrent Kidd) and musically well prepared. James Lee as Terri Dennis, leads us competently through the workings of the play, his impersonations of the 'famous' include Marlene Dietrich and Carmen Miranda, amongst others, and are created effortlessly, and he has a compassionate touch to the humanities of his other function in the soap-opera of the Nichols' demands. Three recent graduates from the WAAPA BA Musical Course give performances of outstanding skill: David Hooley, as Stephen Flowers; Henry Moss, as Eric Young-Love and Diana Perini, as Sylvia Morgan, their music, dance and acting responsibilities finely judged. Peter Eyers as the misguided and 'Blimpish' Major Giles Flack, along with Morgan Junor-Larwood, Martin Searles, Jamie Collette and Matt Butcher, too, give good support. One needs to mention David Ouch and Gerwin Widjaja, who besides representing the presence of the underclass of the citizens of this colonial outpost, also have (along with Mr Moss) concocted a trio of 'drag' entertainers to warm up the audience in a pre-show entertainment of some delight.

The production is brisk but sometimes just a little too brusque (some of this text is much funnier than these actors allow), but it is as my fellow audience member said as we were applauding: "a little charmer". I thought it more than that and more memorable/successful as an experience than the recent London production, despite the New Theatre's more modest resources.

Another musical to catch this month in Sydney.

P.S. The New Theatre has program notes for both the writers of this show. Well done.
Posted by Editor at 11:12 PM

Totally agree. I was very disappointed by the West End production, which failed to capture the spirit of the piece.