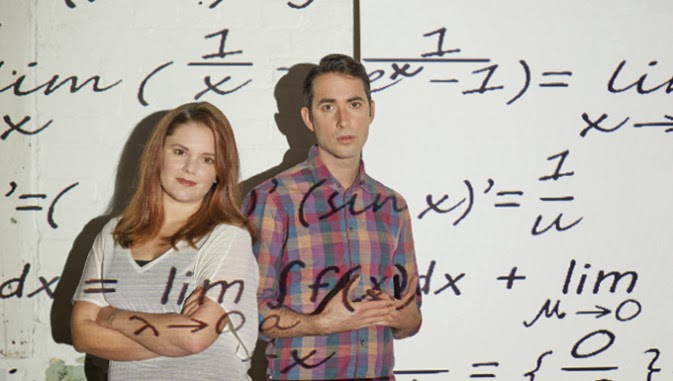 PROOF by David Auburn was first performed in 2000, and was awarded:

These five awards attest to the outstanding merits of this play. These merits are what draws one to this theatre (there has been a previous production at the Sydney Theatre Company, directed by George Ogilvie, with Jacqueline McKenzie and Barry Otto, in 2003), and these merits, in the writing, is what gets one through the experience of this production at the Ensemble Theatre, directed by Sandra Bates, for the direction, and the acting are simply, and only, adequate.

Robert (Michael Ross), was a mathematician, of prodigious genius, at a very young age, later to become a professor at the University of Chicago, who, subsequently and unfortunately, succumbed to a debilitating mental illness. He had two daughters: Claire - 29 (Catherine McGraffin) who is married, and a financial analyst, living in New York, having left her sister, Catherine, to care for their ill father in Chicago; Catherine - 25 (Matilda Ridgeway) a, possibly, gifted mathematician who made the decision to give up her own university studies to care for her father, but who, as well, has developed, secretly, a revolutionary paradigm-shifting proof about prime numbers, whilst struggling with a fear of a genetically inherited tendency to a similar mental fragility as her father's; and Hal - 28 (Adriano Cappelletta) a student mathematician, who was preparing his Phd under the mentorship of Robert, and has been reviewing, the note books belonging to his teacher, and attempting to engage Catherine into a long wished for relationship.

The play is not really about mathematics, and so is not a daunting exercise for those of us who are fairly rudimentary with numbers, (no Stoppardian concentration, cleverness required here, a la JUMPERS or ARCADIA), it is, rather, an emotional observation of a delicate young woman, Catherine, in the throws of deep grief, attempting to find a 'proof' that will help her distinguish between her own sanity and the possession and pressure of 'genius' - a very American drama with a therapeutic pre-occupation, indeed. The play in two acts with nine scenes takes place over a three day period in the year 2000, with two flashbacks to 1996. The writing is full of surprise reveals, and dramatic twists and turns - it has sometimes the feel of a psychological thriller, as of Paula (Ingrid Bergman), in GASLIGHT, one can ask, while watching the play, "Is she (Catherine) mad or isn't she?", and be kept on the tender hooks of indecision, right down to the end. This is a story with Catherine as the centre of our interest - the first scene, we progressively, discover, is a mental delusion composed by her, and sets up the mechanisms for all the dramatic explorations/ambiguities of the play. We are led through an intriguing few hours, by Mr Auburn. The simple observation from Catherine: "You should have trusted me", ought to be an accusation thrown at us, who have doubted her, and give us pause about our swift judgements/prejudices. The play is wonderfully riddled with 'layers' of perceptions.

What, then, this play requires is a classic "method" approach to all the craft decisions, especially in the acting. A production demanding an approach, by the actors, director and auxiliary artists, to a deeply researched observation of the 'given circumstances' of the characters and the play, and the ability to translate that into performance. This should seem to be a "slam-dunk" for this company at the Ensemble, who still, honourably, credit Hayes Gordon as the Founding Director of the company, in their program notes - Mr Gordon once being an actor/director/ teacher, famous for his intense preparation of play production, schooled in the American traditions of the 1950'-60's - to quote one of the actors of the early times, from the Ensemble website: "Stanislavskian- Strasbergian- Gordonian." Indeed, I remember my first experience at the Ensemble, THE EFFECT OF GAMMA RAYS ON MAN-IN-THE-MOON MARIGOLDS, by Paul Zindel in 1971, directed by Hayes Gordon (in the 'round'), and been startled to shout out a warning to one of the characters,  during the performance, so 'real', intense and believable was the production!

In this present production there is only a token sense of an absorption in the 'method' of the acting style that is required to reveal the realities of the characters - for, here,  they appear to be superficially experienced, and decorated with, mostly, characteristics of behaviour, not character - I came to conclude that Ms Ridgeway's Catherine must be a 'coke-head' (cocaine addict) - for this Catherine seemed to touch her nose with her elegant fore-fingers so often, I thought it must be a choice, to reveal to us the origin of her possible 'madness'. I have recently seen,  THE WOLF OF WALL STREET and THE GREAT BEAUTY, and may, of course, have been in a mistaken mind set. This kind of choice, permeates, unfortunately, all the acting, and is symptomatic of the shallowness of approach, for on the night I attended, it seemed when the text was not being spoken, nothing was happening - the play came to a halt, nothing sub-texturally was happening. There was no 'passionate pursuit of an objective', at all - (to speak the arcane of the 'Method'), instead, there was a barely 'acted' generalised set of static 'emotional states' on view. If the play does not have a central performance anchored, deeply, into the subterranean struggle of the inner turmoil of the character, (i.e. layered) and, then, supported by similar imaginative engagements, from the other characters in the play, there is no chance for conflict or real dramatic tension to resonate - the play will lose it's emotional intelligence, volume, integrity and, to be crass, wallop.

The history of this play, when one counts the above Best Play awards, and add the 2001 Tony Award for Best Direction of a Play, by Daniel J. Sullivan, an expert in this kind of writing, along with the 2001 Tony Award for Best Actress, to the originator of the role of Catherine, given to Mary-Louise Parker, (note, this actress in the television adaptation of ANGELS IN AMERICA - as Harper - you can, also, see her on television in WEEDS, if you are unsure of the qualities I am alluding to), tells us that this play has the potential to be a devastating night in the theatre. PROOF is in the tradition of other great American plays and playwrights: e.g. contemporaneously say, THE HEIDI CHRONICLES by Wendy Wasserstein; BURN THIS by Lanford Wilson; CRIMES OF THE HEART by Beth Henley; THE YOUNG MAN FROM ATLANTA by Horton Foote etc. where the text, along with the 'actions' indicated by the writer, is only the 'skeleton' or bone structure of the play, that need to be 'fleshed out' by an imaginative creative team. The writers have given the artists, approaching their work, clues, as to what to delve into, reveal, but not the complete solution.

None of these actors, in this production of PROOF, have been coaxed by Ms Bates to achieve this at the necessary artistry. Add the difficulty of the slack musical dynamics of this performance, orchestrated by Ms Bates, and dullness can set in. Observe where actors indulge in 'motivational' pauses for us to witness - in other words, where these actors (unconsciously, I presume) ask us to watch their character act-out the struggle with the textual offers of the character they are engaged with, instead of 'pursuing need' - both Mr Ross and Ms McGraffin seem settled into this routine of 'watch me act', instead of 'telling the story' with a 'passionate pursuit" of character need- which, because of the actual pauses written by the writer, cause the 'music' of this drama to stagger and appear effortful, leaving gaps, time, for us, as an audience, to disengage, to embrace a disbelief in the reality of the propositions of the play - characters, plot and dilemmas. A kind of tedium, exhaustion, set in, for me.

In the Hayes Gordon tradition-technique of approach to production, there is no way, I presume, one could have the detail of a green 'living' vine climbing up the walls of the 'house' in December, in Chicago, what, with its notorious winters - it being so cold! - and yet, here, in the design by Graham Maclean, permitted by Ms Bates, an acolyte and the designate of Mr Gordon's theatre since the 1980's, that is what we see - that vine in December, 1996, and four years later, in September, 2000,  exactly the same vine?! -nit-picking, for sure, but really... this is where my concentration had drifted to, in this production. The lighting design, by Trudy Dalgleish, also, is quizzical and lacks real import in defining the time shifts and seasons of the play. The music for this production, which has an extensive explanation in the program notes - it is the only interest examined in the notes: talk of Bach, Brahms, Hiller and the idea of 'mathematical proofs', like one of those tedious artist statements we are sometimes required to read in art galleries, to explicate what we are looking at, in this case, listening to - has little added affect for the experience of the performance of Mr Auburn's play.

That the Ensemble has the acumen to choose, perceptively, their program of plays - see this season brochure, (I did enjoy NEIGHBOURHOOD WATCH and look forward to CLYBOURNE PARK, for example) - and yet be so lackadaisical in the preparation of the productions of those plays - plays that I want to see - is evitable, surely.

This production of PROOF, a good play, is barely adequate to reveal the potential of its dramatics. However, I will report, the audience I saw this performance with seemed, generally, receptive to what they had seen. Do see for yourself - the season continues until March 8th.