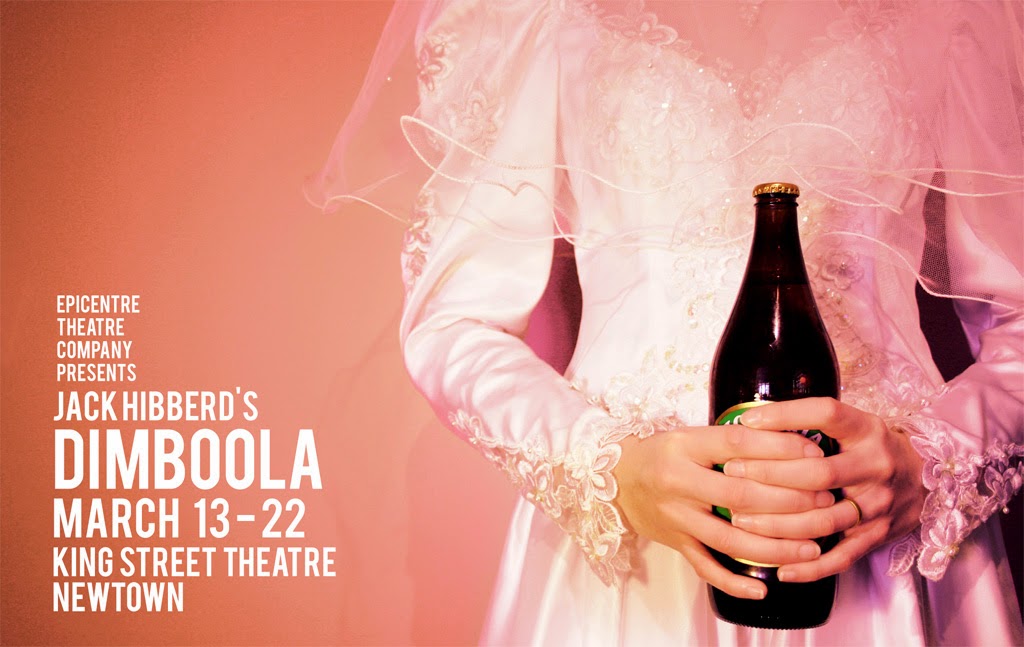 I have never seen DIMBOOLA. I was keen, at last, to see the play, and the company were very persistent in inviting me. So.....

I have, of course read DIMBOOLA, and know of it. Written by Jack Hibberd in 1969, it premiered at the famous La Mama Theatre in Melbourne - a 'hot-bed', then, for nurturing the new Australian play. Originally directed by Graeme Blundell, who went on to fame in the seventies starring in a trilogy of filmed sex-comedies : ALVIN PURPLE (1973); ALVIN PURPLE RIDES AGAIN (1974) and MELVIN, SON OF ALVIN (1984). which, like this play, became a 'popular' culture success. Well, the first film, at least.

DIMBOOLA presents a celebration of the wedding of Protestant Morrie McAdam and Catholic Reen Delaney in the Mechanics' Institute Hall in Dimboola, Victoria. The families and friends meet, and through the traditions of the event greet, argue, drink and drink, and brawl in an erupting fog, fug, of alcoholism , and 'tribal' prejudices/rivalries, and, ultimately, drift off home, supposedly, none the worse, in any way, for the experience - a true Australian fairy-tale, perhaps? (No smoking at this event, I noticed.)

The families arrive in the foyer and greet us and share a glass of sweet sherry. There was much noise and recognition going on, then, we were invited into the theatre. The wedding party sat along a bedecked wedding table, and unusually, for the play/production format, we, the audience were sat in the permanent seating banks of the theatre - for, usually the audience are made part of the ceremony and are sat as guests at the 'feast' to interactively be engaged and engage. A live band, the famous "Lionel Driftwood and the Pile Drivers" create some of the aural havoc.

This company of actors are very 'raw' in their skills and tend to compensate with adrenalin driven energy. There is some good costuming (Deborah Warren) and it assists the actors in creating defined personalities, with nicely observed physical choices, leaning decidedly to 'cartooning'. There is much interaction of a believable kind going-on between the characters during the ceremony, but it is the poor handling of the text that lets the show down. Most of it is 'shouted' and not anchored in specifics of action. Essentially, no-one is really talking to anyone, and no one is really listening.  It is, mostly, a recited cacophony of self-absorbed, caricatured noise.

Despite the relative lack of audience participation that is an intended part of the 'charm' of this play by Mr Hibberd, (in fact, reading about the history of the play in production, it has become a stalwart of the theatre-restaurant culture), at only 75-minutes in length, it was interesting enough to keep me in there with this valiant group of young artists - the band helped enormously : Eugene Brown, Aiden Gerstmeier, Matt Blundell, seemingly, led by a very confident Julian Sanchez. What arrested my interest was the dawning recognition of the essence of this work as an example of a 'terrifying' cultural artefact of yesteryear - of 45 years ago! - I became a kind of cultural 'archaeologist', sifting through the time layers of our dramatic literature! - Perhaps, it was the seating arrangements that allowed me to take an objective look at this play, instead of having the usual experience of the play, which was to be seated at tables, as part of the action and so, possibly, more subjectively, viscerally involved.

For instance, the banter (a lot of it), around the 'shenanigans' of the local clergy with young children, all gossiped about, and in period style, laughed at as a routine affair of the community. Times have indeed changed, and the cultural acceptance of such 'rumour', detailed, in the play, certainly helps those of us flabbergasted by the daily revelations of the Royal Commission into Institutional Responses to Child Sexual Abuse, to comprehend how it managed to go on without moral outrage and defensive action. The community thought it was fair game for comic comment! - it was 'hilarious'. The question that comes to mind, then, is : "Does this company, led by their Director Darcy Green, still think it is hilarious?" Reading the program notes, it seems so! Considering the evidence of the times about me, it may account for the popularity of the play, and why I have resisted it, mostly unconsciously, for so long - as  much as I have to the cultural 'baggage'  around the filmed 'artefacts' of Alvin Purple.

(The choice of image selected for this production, see above, and on their program cover, also raises a faint stir of discomfort in me, concerning this artistic company's stand around the cultural and generational abuse of alcohol in Australia today, and its consequences - death, addiction and violence, both random and domestic, especially against women and children  - particularly, since the company itself is made up of so many young persons, quite identifiably connected to this social debate.)

Darcy Green, is making his debut as a director and was drawn to this material because "of its hilarious script as well as its strange, complex and tragically Australian characters. ..." (sic). The program tells us that "Darcy is a full time student at UTS where he studies Visual Communications. Darcy also teaches extra curricula drama at St Ignatius College, Riverview." (Mr Abbott's old school, yes?).  Mr Green does, indeed, have a visual talent, for he has some generalised concept of how to stage a play, and build the image of the characters, (if he had a hand with the production advertising imagery, 'Singo' or Clemenger's may have a new talent for their 'stable') but not, as yet, much nuance or sensibility around the use of the language of the text to reveal the play and its intentions for an audience, except as approximations, resulting in only a communication of the gist of the dramatic architecture of the writer. One wonders, as well, has his education encouraged a critical dramaturgical assessment of the material, and its worth, value, to be toiled over by these artists and represented today, on our stages. There is a world of Australian scripts out there, I can vouch for. DIMBOOLA, seems to me, a relic of the past, that is best read, and debated in a cultural, academic essay on the development and representation of the Australian psyche in our playwrighting history.

For me, this play has a 'bogan-larrickinism" that I thought (had wished) we had outgrown as a social organism. Oh, I have forgotten the present broadcasts from the Federal Parliament of Question Time, curtesy of our own ABC, and any number of popular radio (KIIS FM, is it? Sandilands and who....?) and television programs that attract a lot of attention. This material is a kind of propaganda, really, for good old time Australian values. This kind of thinking, on my part, could be read by some as 'very un-Australian'. I'd best be careful. Amen. So be it.

This production is a rough-house raucousness played with undisciplined inexperience, and best approached by family and friends of the company, and those politically aligned to the comic role models it , affectionately, reveals. That is those of us who are relaxed and comfortable with our social and political values. Those of us 'comatosed' by the popular culture that makes no demands of us, other than our blithe enjoyment, and confirmation of our secure belief that all's right in our world of the fair dinkum. To quote Morrie McAdam, the bridegroom of the play: "No worries."

EPICENTRE has announced its next effort, Oscar Wilde's, AN IDEAL HUSBAND, set in contemporary London. I hope the specifics of the writing are going to be more accurately engaged within 'the concept', using the present day cultural politics to inform the directorial choice made by EPICENTRE - and it is not just a gimmick or budget choice - for, Mr Wilde's work, at almost three hours of great literary density, springing from a social urgency, of which Mr Wilde became a notorious victim,  will need more rigour than what has been given to Mr Hibberd's less taxing verbal gymnastics, and intent.