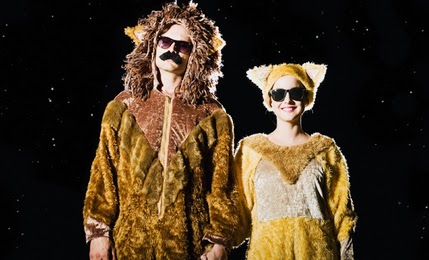 Side Pony Productions in association with Rock Surfers present THE PRIDE, an original work devised by Cast and Director at the Bondi Pavilion, Bondi Beach.

Zoe Pepper the founder of the Western Australian company Side Pony Productions, and director and co-devisor of this show tells us, in her program notes :


Until about 10,000 years ago lions were the most widespread mammals after humans, living in Africa, Europe, India and the Americas. The starting point for THE PRIDE (as in a pride of lions, or, is it the pride of daddy lion?) came from a fascination with the behaviour of lions. I was taken by the structure and brutality of their social patterns and found disconcerting similarities between human and lion behaviour. We've moved a long way from this initial idea ...

Well, not far enough, really, to make a show of any real interest other than for friends, or, the proud Pepper family, or stoned, drunk, or both - it may be necessary - hipster-types with more money than sense, may, may find it funny, or, perhaps, serious! I mean, putting actors into silly, lion suit one-seys is not enough to keep the rest of us going for an hour and fifteen minutes (was that all it was?)

Script built from improvisation = worse than lame. High school stuff, at best. And, that is a very odd, rare, high school, I'm talking about.

Take the first scene: A man dressed in a lion suit (Bruce) walks on stage with a silver, metal bucket. He acknowledges us, the audience, many times. He goes to a table on which several stuffed toys with a likeness to lion cubs sit. He puts the bucket on the floor, below the toys/cubs, which he then pushes into the bucket. They plummet - thud, into an empty bucket (no splash). He picks up the bucket, checking we are watching, goes behind the table, puts the bucket on the table, and then presses his hands into the bucket, seemingly to squash, mash and mangle (maybe, 'drown' the cubs/toys , however, there is no water sound or visual affect) violently, a couple of times. He then picks up the bucket, and nonchalantly ambles off, through a door way.

Should we be amazed or horrified at the likeness of the animal-lion and human behaviour? Now, what are we to make of this? Should we laugh or cry? Was the lion drowning his off-spring? Will have to check with David Attenborough to discover whether  the male lion does that? Or, is it the idea, that it is a male human, who, according to the premise of the program notes is much like this beast in behaviour, has, indeed "disconcerting similarities", is drowning his children? I am not sure that I  have much credence for the idea that Side Pony is conjecturing, here. Proof? Well not in my experience of common human events. Think further, his lioness partner, Linda, does not seem to miss her children. Is she, then, complicit? Is this the normal behaviour of the lion parent and therefore the human? Are these Pride and Human behaviour expressions, demonstrating these "disconcerting similarities", suggesting, we are, all, both, psychopathic killers of our children?

Mmmm, puzzlement. On we go to the next sequence - how to use a telephone recording system, and by the way, demonstrate singing and rhythmic abilities!

We, the audience are onto the concept of THE PRIDE right from the start, and after that first scene just hope, and hope, that there is going to be a surprise development as the clock ticked on and on to that first scene's proffered dilemma. Unfortunately, there isn't one. It's just a joke - a truly-ruly Lame one!

Or, is this it? - ("Ahhhh! OMG. Don't please!") - Is this it? = Mawkishly, Bruce, the daddy lion, grows old, and right at the end, underscored by sad and ominous music (Nathan Nesbit, Composer and Sound Designer), he acquires traits of some of the old: Alzheimer's, and then, after being humiliated by the toughness of the up and coming young lion, strips off his suit to reveal a near naked human being (shocking, oh no!) - just in case we hadn't understood the (laboured) theatrical metaphor, the genius idea of this show. Was that the denouement, the dazzling insight, development? Hey, Side Pony, we got it on the first entrance - 75 minutes ago, for god's sake.

The skills of the performers are not bad: Brendan Ewing as Bruce, the daddy lion; Adriane Daff as Linda, the mommy lion, with cubs and sisters; Russell Leonard as James, the growing-up lion who will become the new daddy lion. (Come to think of it - I'm sure you are onto it, too: King Mufasa could be Bruce - with elements of Scar, the jealous, resentful bits; Queen Sarabi could be Linda; and Simba could be James, the new king of this castle he has been renovating. They all live on Pride Rock!)

Clearly, Mr Ewing has stand-up comic umphhh, even without his guitar and award winning songs - he has ample opportunity to do his schtick! Ms Daff has the submissive and patient second banana (but smarter) role down pat - funny. Is that her schtick - submissive and patient second banana? - if it is so, then not so smart. Pssst- you're been done over by those blokes and Ms Pepper: Where's your special show off bit in the show? Mr Leonard from the program notes we learn, is a "singer, actor, dancer, acrobat whose recent involvement in 'King Kong" the musical won him a 2013 Helpmann Award for Outstanding Theatrical Achievement and 2014 Green Room Award current nominee for 'best ensemble' ... " (sic), who was then given the chance to, indeed, demonstrate his special schtick with a lip-synching opportunity, towards the end of the show, engaging his dance, and especially, acrobatic, acrobatic, acrobatic amazements - they were really, really, really good. But, I could not fathom how this interlude fitted the dramaturgical narrative structure of THE PRIDE, organised by Ms Pepper. It just seemed to make the show way longer than necessary.

As the Side Pony site tells us : "good people doing terrible things."

The 'home' of  Bruce and Linda's pride is finally decorated with a large wallpaper blow-up, of a re-production of French painter, Henri Rousseau's REPAS, which features a lion devouring its kill in the down, centre area of the canvass. Henri Rousseau is famous for being a leading member of the post-Impressionist painting movement, the Naive / Primitive school. If only the naive and/or primitive 'school' of theatre creation that is Side Pony had produced something as wonderful as Mr Rousseau's work of Art. It hasn't, neither art, nor even, a plausible entertainment, rather, 75 minutes of fringe theatre hell!

THE PRIDE is the Rock Surfers first offer for the year, 2014. It is almost April, and I thought we had lost them. Last year this company made a significant contribution to the theatre scene in Sydney. This work, that they have curated, associated with, is an ominous awful, retrograde decision.

Save your money. Go to the zoo, or rent THE LION KING.
Posted by Editor at 7:27 PM