Construction of the Human Heart 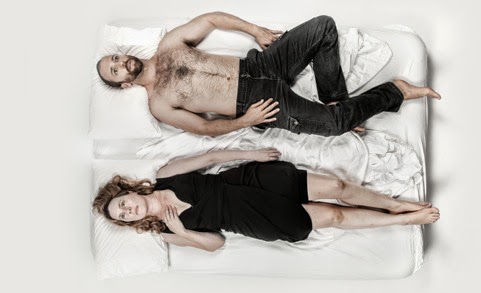 After a relatively disappointing time in the theatre in the past month or so, it was an exhilarating experience to go to the Tap Gallery, early on Holy Thursday night, after a 'tough' day at work, and be 'buzzed' - kind of re-generated with excitement - indeed, perhaps, spiritually resurrected, two days before Easter Sunday. The occasion? Watching a re-vival of Ross Mueller's 2007 play, CONSTRUCTION OF THE HUMAN HEART.

It has been sometime since having a 'meeting' with Mr Mueller. I am a big fan. His play CONCUSSION (2009) sits high on my personal list of Best Australian Plays. ZEBRA seen at the Sydney Theatre Company (STC) in 2011, although, a disappointment, was worth a 'gander'. CONSTRUCTION OF THE HUMAN HEART has had a short season at B Sharp, way back in the day, but I had not seen it.

CONSTRUCTION OF THE HUMAN HEART begins with two adults, Him/He and Her/She. We meet them preparing themselves in everyday clothing, on a tidy, black, blank space, with two chairs, a water bottle and many piles of neatly stacked typed manuscript. Once we are all comfortable they pick up a manuscript of a few pages and begin to read it for us.This is the modus operandi, maybe, the modus vivendi for Him and Her. We discover HE (Michael Cullen) is a playwright. SHE (Cat Martin), a writer of children's books. Reading stage directions and reading text, accompanied, sometimes, by a disembodied voice giving other instructions (Angela Bauer), over 90 minutes or so, we are presented with the construction, or rather the struggle with the construction of a play, that reflects the human hearts of these co-authors, who have suffered a joint tragedy. Here, in front of us, they transmute that life pain with an act of craft practice, into an attempt to create art. What is brought up, back, for the individuals, and the couple, during this 'reading' is the substance of this play.When the play finishes the stage is no longer neat, it is strewn with the dropped, discarded, thrown pages of manuscript once so neatly piled, now an observable mess of the consequences of what it might be to be an artist, a writer.

It is the sheer pleasure to be treated by a writer with such originality of literary construct and to be flattered that we will 'get it' - so, subsequently, made to feel clever (smart); to have the text strewn with social, political and cultural references that are delivered to us at 'lightning' speed and not 'spoon fed' to us as if we were children - treating us as fully fledged adults; and to have a genuinely, deftly, even stealthily, delivered emotional catharsis, in the experience of the writing in performance, with contrasting flashes of wit. All, great reasons to see this play.

The Direction by Dino Dimitriadis is straightforward, and although the performances are unequal in their affect: Mr Cullen, continuously impressive, whilst Ms Martin tends to be over elocuted (not appearing to be using her 'authentic voice') and so, gives the appearance to be too disengaged from the sub-textual journey, until (thankfully) the last third of the play, the power of the writing, conceptually and in its content, sweeps one along with driving curiosity and ultimate reward.

If you feel in need of a stimulating night in the theatre, of both mind and heart, I recommend a visit to The Tap Gallery and CONSTRUCTION OF THE HUMAN HEART by Ross Mueller. There is, I read, a current commission for the STC from Mr Mueller, let us hope that it is sooner rather than later. A voice of some sophistication in the Australian playwrighting scene, I reckon.
Posted by Editor at 9:49 PM