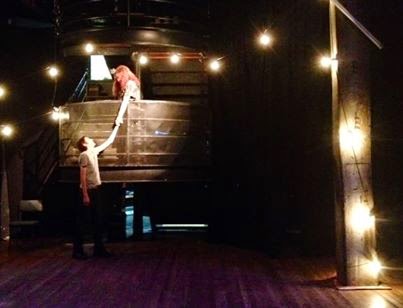 Powerhouse Youth Theatre (PYT) in association with ATYP presents IN THIS FAIRFIELD - Romeo and Juliet in the West, at the atyp Wharf Theatre, Hickson Rd, Walsh Bay.

IN THIS FAIRFIELD - Romeo and Juliet in the West, directed by David Williams and Kate Worsley, is a guest showing in association with ATYP as part of what is called a Cameo season at the atyp Wharf Theatre. This work has already had its Premiere out at the home base in Harris Street, Fairfield, earlier in the month. Begun as a creative development in 2013, the Directors have worked with high school students from Miller Technology High and Fairfield High with the fledgling Powerhouse Youth Theatre (PYT) Ensemble to develop a Western Sydney response to William Shakespeare's Romeo and Juliet. It was inspired initially by the presence of Fairfield's culturally diverse make-up. Fairfield is, in fact, the most culturally diverse region within Australia - it is sometimes called 'Little Baghdad', by the media, because of its high population of Iraqi born citizens. Then, in a play where two star-crossed lovers from two different families (cultures) fall in love, one could not have the possibility of a more apt probability, that that could happen in Fairfield, along with all of its 'problems', as it did in Fair Verona.

There was, for me, three really impressive details in this experience.

Firstly, I was impressed that the material of the play was a striking balance between the verbatim recorded responses of the participants to the journey, and the language of Shakespeare's play. The abiding pleasure was to see that the major part of the work was driven by the participants and their stories which subsumed Romeo and Juliet, into their world, and not the other way round of them being 'buried', subsumed, by Shakespeare's world. The PYT Ensemble defined Shakespeare and the parallels of that fiction world to theirs. This was, truly, a play about living and growing up in this fair field. (It was artist/partcipant driven.)

The play began with the actors sitting on chairs across the back end of the stage, reflecting, and then, recalling moments of 'romantic' resonances that they may have had at the cinema. The natural truth of their spoken memories broke through any nervous misgivings one may have had about the enormity of the concept of the core-material source. Significantly, none of the resonances, spoken, were from the memory of any of the films of R and J, (although, latterly, the Leo version, was singled out), some of them were quite amusing, and some surprising : BRAVEHEART, being one!!!
"Braveheart! Romantic?" someone protested.
"Yeah!" replied the respondent, "The love of his country. That's romantic."
(Interesting observation: that for one of the participants, it is love of country, over personal love, that was more important, more romantic. Cultural differences, values, perhaps?).

The bulk of the show showed the young actors examining the principal events of the Shakespeare play, interpolated with quotations of the actual text, and tableau vivants of some of the major events. Intertwined are comments, debate and references from their real world and to that of the play. Very movingly, as the re-enactment of the Romeo and Juliet story completed with its final lines :


For never was a story of more woe
Than this of Juliet and Romeo.

for one of the actors to protest such a statement, and instead tell us of a real story of one of the refugees from her neighbourhood, that is really a tale of much woe. It put the project, all, into perspective. A pause of some contemporary power was achieved.

Secondly, it was rewarding to see the developments of three of the PYT Ensemble, who had appeared in their last project, THE VIOLENCE PROJECT, last November: Justin Kilic, David Robertts and Amanda Sullo. Their skills and stage presence blooming and shaping with palpable confidence. The old aphorism: Practice Makes Perfect, came to mind. The new performers: Melanie Araya, Monica Kumar, Barbara Shefer, Jackson Stewart and Johnny Violatzis, too, had found an individual confidence and a steady surety in the team work. The future of the Company has some foundational realities.

Thirdly, and this is a personal prejudice, I particularly enjoyed the fact that I saw this production, by these young, multi-cultural Australians, incorporating their lives into the world of ROMEO AND JULIET, on the 23rd April, 2014, the 450th Anniversary of the birth of William Shakespeare. The sight of young artist Jackson Stewart, (who was a whizz with the clarity of his Shakespearean text), waltzing-dancing with a collected works of Shakespeare, during the re-enactment of the Capulet Ball - on the cover, a portrait of the writer, easily seen – was, indeed, a wonderful way for this company, and our audience to celebrate the heritage of a man who defines with his work what it is to be human.

The guidance from Mr Williams (founder of version 1.0) and Ms Worsely (Clockfire Theatre Company who presented THE GRIEF PARLOUR), assisted, supported by James Brown, with a complicated and witty Sound Design; Andy Ko with his flexible Lighting Design; and stage managers, Rachel Small and Luke Cignarella, was clear and clean.

This company, Powerhouse Youth Theatre, led by Karen Therese, Nathan Luff and Johanna Allen is an example of the real power of theatre as a contemporary tool and craft that can create defining stories, that sometimes can be read as art. It is a palpable observation of the empowerment that individuals can achieve in the opportunity to take part in the communal act of storytelling - a kind of "talking cure", valuable for the doers and the watchers.

THE LONG WAY HOME, NIGHTBOOK are other examples of theatre of this kind as an invaluable asset to its communities. That mix of Art and Health, amazing to see it so rawly successful.
Posted by Editor at 1:16 PM