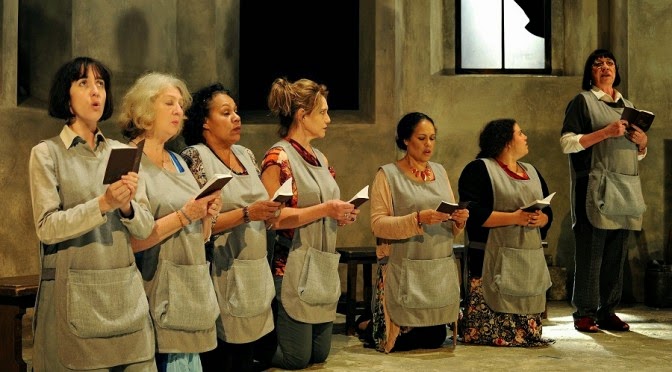 PARRAMATTA GIRLS is an Australian play written in 2007 by Alana Valentine, and first performed at the the Belvoir Theatre, directed by Wesley Enoch. The play concerns eight inmates returning to an Institution for a reunion after some forty years. That the Institution was the now infamous Girls Training Centre (GTS) at Parramatta, and that the play was a sensation of revelation in 2007 that was timely and important and necessary (check out my observations of an Australian cultural favourite, DIMBOOLA), despite the Institution being closed for some thirty odd years, tells of our willingness to suffer collective amnesia over 'difficult" matters of our past. That it is now being revived at the Riverside Theatres, Parramatta, not too far from the still standing institutional building, during the time of the daily reports coming from the current Royal Commission into Institutional Responses to Child Sexual Abuse, registers the pertinence of this play and the tragedies of our so-called contemporary 'civilisation', in 2014.

The performance of this play, the other evening, made me think: What is happening in our Institutions, today, the 8th of May? (The 17th of May?) What is happening in our elected Government's Refugee Camps? Is there still, today, Institutional Abuse in Australia - sexual, physical or psychological - which I as a citizen, of this country, blithely, close my eyes too? The Parramatta GTS Institution only closed in 1974. I was earning a living as a young actor, conducting community workshops a few hundred yards up from the GTS (amongst, other things), and was totally oblivious to the ills of what was about me (had I simply believed the 'propaganda' of the authorities of the time? Do I now remember reading of the riots in the daily evening newspapers: THE SUN and THE DAILY MIRROR, and by reading it in the papers, believe without hesitation, that what I read must be true?) More urgently, I am asking: "Just what am I not attending too today, 'in my own backyard'?" History not repeating itself, but humankind. Me. Myself. This thinking provoked by one of the virtues of theatre at its best: enlightenments, contentions to consider, deal with. Personal assessments of my positions and responsibilities in my society. Self confrontations, while I sip my tea, eat my lamingtons!

One may be shocked, scandalised at the Boko Haram kidnapping, led by Abubakma Shekau, of 276 schoolgirls, in Chibok, in remote northeastern Nigeria (April,14th), and the threat that they be sold into slavery, and regard, judge it, as a barbaric act. That it is far away, I might think is fortunate, and not really any of my concern. Phew! And yet, I still permit, by my silence, our own continued shocking behaviours from our own Institutions, right 'next door'. I wondered, "Did our Indigenous families suffer kidnapping and allowed to be 'sold' into a kind of 'slavery'? Did the children of the 'poor' similarly feel that their children were 'kidnapped' and sold into 'slavery' in our institutions? Mmm?". Pushing a parallel too far, some might say! We can be, should be, just as shocked with the current revelations of our trusted Institutions behaviours around us today, that the Royal Commission 'discovers', uncovers, and the PARRAMATTA GIRLS play, by Ms Valentine, should be a flash point of reminder of our responsibilities.

Alana Valentine built this play from a verbatim resource: interviews, consultations, conversations of some thirty former inmates of Girls Training School (GTS) Parramatta. This play, says Ms Valentine in her notes to this production:


is not a documentary. It is not legal evidence. It is not biography or autobiography. It is a play about the nature of memory and the triumph of a community. ...

This play records the experiences of young girls, women, and the abuse that they suffered at the hands of their authorities, and from themselves, in the desperate fight to survive. It tells us of the scars and living nightmares of the aftermath of such incarceration and the burden of carrying the physical and mental-emotional scars of such a life, long afterwards. It, fortunately, tells us of the growth and journeys of some of the women who have managed, despite the suffering, to find ways and means to create a safe and optimistic life for themselves and those about them. It is a play that tells of horrors but also, relievedly, of survival. But, of course, it hints at some who did not, and have not survived in healthful tact. Ms Valentine in the introduction by Rosalie Higson in the Currency Press play text publication (2007) tells us:


A lot of (the women) lack self-confidence, have self-esteem issues They've internalised the idea that they're a bad girl and will never do any good. Some women have certainly risen above what they were handed, and we love stories like that, but a lot of them haven't; they are still very damaged.

This production of this play by Tanya Goldberg, carries its heart of respect a little too much on its sleeve to be devastating. It tends to sugar-coat the situations of the text with acting that is a touch, too romantically nostalgic and empathetic and lacks - some more, some less - the fuller cauterising realism of the truths of the origins of the writing: true horrors, incredible cruelty, savage and intentional ignorance and tremendous injustice. The redemption of the story told is a little too favoured with the choices in this production. Again, our community is allowed to passively watch, exalt in the ultimate redemptions and survival, too easily. This production gives us room, indeed, for some tears and true regretful sadnesses, but I am not sure if there is real anger provoked, or contemporary consciences aroused about the still living, breathing world about us now. I feel sure that PARRAMATTA GIRLS was not only written for us to sincerely empathise with the characters of the play, and learn of the past 'sins of our fathers', our institutions, but also to gather pause about today, now, and the injustices about us.


[Ms Valentine] warmly acknowledge(s) the ongoing support and my inestimable esteem for former inmate Bonney Djuric who I continue to work with as part of the Parramatta Female Factory Precinct Memory Project, a team striving to preserve and interpret the GTS and other sites of historical significance nearby as sites of conscience for all future Australians.

This production of this play needs to be a more vigorous cite of conscience and less a nostalgic trip back in memory and celebration of the survivors if it is truly, to create Ms Valentine's studied but impassioned work. Ms Valentine goes on in her Writer's note:


Most of all I thank the women who trusted me with their stories for the play's creation, you lived this story with your time and your bodies and I never forget it for a minute.

With their time and their bodies. Their bodies and minds, indeed. And still do so, today. When Ms Djuric, seated as a living witness to this storytelling of some of her and her companions stories in our very theatre, was invited to stand and be introduced, a wave of respect and empathy was sincerely, authentically generated as we took her in and applauded (what, her courage? her survival?) - it was a moment not at all experienced in the performance. Authenticity.

For me, the first act of this production suffered from a dramatic becalming, a nostalgic ennui, so that, at the interval, I had a faint mood of bemusement as to the real purpose of the writing/the performance. Fortunately, the second act shifted up in its gearing and dramatic intentions and a sense of lives, memories being viscerally embodied at some real expense of craft revelation from the actor's possession of the character's realities claimed me for a subjective loss in the truths - I was gradually persuaded. Anni Finsterer, as Melanie, merely in her presence gives a blast of truth and embodiment; Tessa Rose, as Marlene stalks out our attention in her re-telling of the rebellion led on the roof; whilst Vanessa Downing, too, had a story that I wanted to know more of - radiating a kind of curious mystery. The other actors: Christine Anu, Holly Austin, Annie Byron, Sharni McDermott and Sandy Gore gave sympathetic representations of their women, but for me, mostly, were actors giving a fine ensemble display, than risking giving us the living, breathing survivors of a terrible place and time.

Ms Goldberg has staged the play hesitantly, the 'wrong' side of gentle and awkward conventionalities, that robbed the material of its flesh and blood, life and death edge (the marching of the girls seemed forced and unconvincing and repeated once too many times). The clumsy set design by Tobhiyah Stone Feller of bland stylised walls with only one practical entrance, decoratively lit with over-emphatic light patterns (Verity Hampson) and clumsily carried on and off furnitures, prevented us from engaging with the aesthetics of PARRAMATTA GIRLS other than in old fashioned theatrical terms - it seemed to be, most of all, out of scale in the small space of the Lennox Theatre.

I had never seen PARRAMATTA GIRLS before. Watching here in Parramatta, I respected it and came to understand its importance. I took a young Tongan-Australian woman, she, on her second ever visit to a theatre, and she was stunningly shocked at the story, learning something of her local area's history, her adopted country's history. She was moved, shifted. A further proof of the importance of the theatre experience, I think.