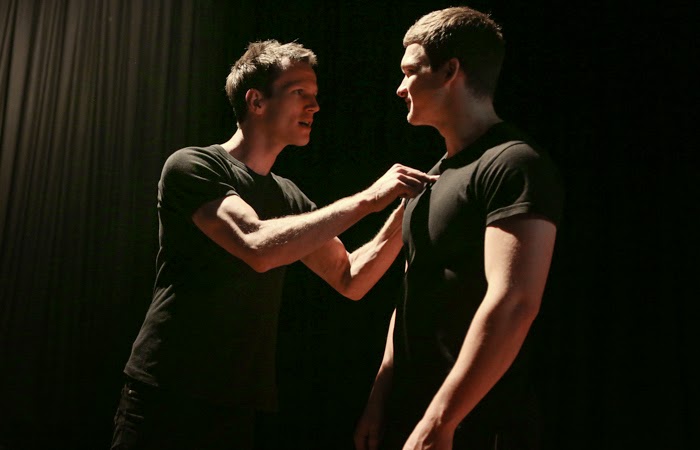 KANDAHAR GATE is a new Australian play by Stephen Sewell. Mr Sewell, at present is the Head of Writing at the National Institute of Dramatic Art (NIDA), and this play and production is part of the training productions for the third year courses of 2014. I don't usually comment on productions in Acting Schools, but not to mention the advent of this play, especially for historical record, would be a cultural remiss.

Stephen Sewell was (is) one of the movers and shakers in the Australian theatre world. His plays when produced were always an event not to be missed, so one could partake in the fierce debates as to their relative merits, or otherwise. He was uncompromising in his subject matter and method (oh, the length of the works, some bemoaned), and a theatre company and audience, alike, knew that controversy would undoubtedly follow each of his efforts: THE FATHER WE LOVED ON A BEACH BY THE SEA (1978); TRAITORS (1979); THE BLIND GIANT IS DANCING (1982); WELCOME TO THE BRIGHT WORLD (1983); DREAMS IN AN EMPTY CITY (1986). That decade of writing, especially, in hindsight, an artistic phenomenon. Other works followed, mostly, produced in Melbourne, and some film and television projects (including, the film of THE BOYS -1998 - based on the play, by Gordon Graham) distracted him from the stage. Then the United Kingdom of Great Britain, the United States of America, Australia and other allies, as members of the Coalition of the Willing, began what they called a War on Terror, and drew Mr Sewell back to the theatre with a blistering writer's response, a satirical-drama: MYTH, PROPAGANDA AND DISASTER IN NAZI GERMANY AND CONTEMPORARY AMERICA, in 2003. Some call this his masterpiece. Certainly, it is an 'earthquake' of a play (I have still to see a production that matches the material). IT JUST STOPPED (2006); THREE FURIES: SCENES FROM THE LIFE OF FRANCIS BACON (2005) and THE GATES OF EGYPT (2007) have followed. Two novels: ANIMAL KINGDOM - based, on the film (2010), and BABYLON (2011), are out and about.

Now, KANDAHAR GATE, once again, a title that demands attention with its 'aroma' of topicality, was commissioned by NIDA, and the recent war in Afghanistan and the fate of two young men in Australia's involvement in it, is the subject matter at the core of this short (90 minute) exercise. Using the inspiration of the Akira Kurosawa film of 1950, RASHOMON, where its principle characters are often "... unable to distinguish reality from illusion, truth from falsehood, and love from hate ..."(1), Mr Sewell explores similar themes. Two boy/men, Gunner (Jack Ellis) and Jacko (Govinda Roser), who have grown-up together, marooned in a lifestyle of aching boredom and unemployment, see an advantage in the army wage, and perhaps 'adventure', to enlist, and to become, truly "an Australian". There is no other motivation, except, perhaps a simmering machismo attraction to each other. The 'adventure' in the deserts of Afghanistan, ends in a suicide on the battle scene, and a consequent cover-up enquiry by the protective Australian Army authorities - these are great Australian soldiers with no need to recognise them as just humans, incarcerated in both personal and public rings of hell, and this story will be recorded, our way, with honour, for they are all, all honourable men, so sayeth the army.

I was drawn to parallel the story of Gunner and Jacko, while watching KANDAHAR GATE, with the imagery of Australia's cherished memory of its 'bloody birth' on the fields of World War I, and could detect character reflections back to the famous Peter Weir film GALLIPOLI, written by David Williamson (1981), in the men/boy mates of Archy (Mark Lee) and Frank (Mel Gibson), and further to the two boy/men mates in Clem Gorman's play, A MANUAL OF TRENCH WARFARE (1979), with its themes of sex and violence intertwined in the macho heat of warfare. For, the ANZAC is central to how we think about our military identity. Further, the BREAKER MORANT film of 1980, co-written by Bruce Beresford, and the original playwright, Kenneth G. Ross, with its theme of Army obfuscations and bent usage and banishment of truth, (although, dealing with the Boer War) came to the surface of my consciousness, too, in this very vivid contemporary concern by Mr Sewell.

This play bravely confronts the illusion we Australians may have about the glory of war, especially in the 'thrill' of the ANZAC Centenary celebrations coming-up, and I do believe the above connections are deliberate undertows to Mr Sewell's intent, which is to attempt to force some conversation (and information) concerning our present condition of contemporary war knowledge and our 'romantic' celebration of wars past, still. Says Mr Sewell in his program notes:


Australia's involvement in the war of Afghanistan has been the longest and according to the war journalist, Chris Masters, least reported conflict in Australian history where news of any sort has been so successfully controlled that very few Australians are even aware of our involvement except for the occasional report of the violence in which forty Australians have died, 256 been wounded, an untold number of Afghanis, including children, killed.

And that, just last week, the Guardian On-line News reported a deliberate loss of recent Australian soldiers' documentation of war incidents in Afghanistan, by the Australian Army, throws the mantle of prescience onto Mr Sewell's playwriting schemata - "... a policy that one general refers to as 'contrived secrecy' (that) stops soldiers from telling their stories while still in uniform." (2)  I do recommend James Brown's, ANZAC'S LONG SHADOW - The Cost of Our National Obsession, as a source of contemplation. (I believe and hope, without cynicism, the Australian Army's recent collaboration with the Sydney Theatre Company on THE LONG WAY HOME is, perhaps a move to 'open up', to assist the veterans who are alive, returned and recovering physically, emotionally and psychically). As usual, Mr Sewell invites us to have a conversation of some social, political and cultural significance with this play - one that may not be a convenient one. Of inconvenient truths, at the least.

Directed by Jeff Janisheski, on a vast, impressive design of desert sands, right across the huge Parade Theatre stage (Set Design by student, Charles Davis - what was the expense of this extravagancy? Was it really necessary for this work? Will Mr Davis ever have such advantage again, considering the age of severe budgetary austerity in the real world, he will soon enter), the major problem for audience comprehension of all the major ideas/conceits of his vision, of imagined (weird apparitions of, what I suspect to be Japanese-inspired masked figures, spooking down the tunnel of the metal container!) and real worlds; and stage-plotting the busy cross juxtapositions of time and place, (those back stage costume changes are epic, I understand [Costume design, student, Emma Vine] - the back-stage crew, also students, deserve applause for managing, while not forgetting the actors 'heroics' with their 'gallop' behind the scenes whilst undressing and re-dressing to enter collected and focused on their acting tasks) is the casting of only six actors over some nine roles. The sorting out of who is who, when, became an obstacle for fluidity and clarity during the performance, to the extent that only an after show discussion could solve it, if one was inclined to do so. The actors: Matthew Predny, Georgia Wilkinson-Derums, Duncan Ragg, Xanthe Page and particularly, Govinda Roser and Jack Ellis acquit themselves admirably, and the scene text work, coached by Hamish Pritchard, is taut and convincing, assisted by microphone techniques.

KANDAHAR GATE, with casting of the nine roles, one per actor, and to be not so swamped by Production Design demands, to assist the fluidity and clarity of the text, I hope, will find another life on a major theatre stage in Sydney. For Mr Sewell, despite, a tendency to over extend sex indulgences (real or imagined action?!!) mixes the individual human dilemma in the overwhelming river of man's tendency to repetitive, catastrophic carnage to powerful effect.

Like the important conversation opened by Jada Alberts in her play, BROTHERS WRECK, about youth suicide, Mr Sewell opens the conversation on the human cost of war and the hidden reality of it's affect on our brothers, sisters, families and friends, and on our present ethical and moral value systems. "The gap between our soldiers and the society they serve is a chasm." (2). Ignorance is bliss, it seems.