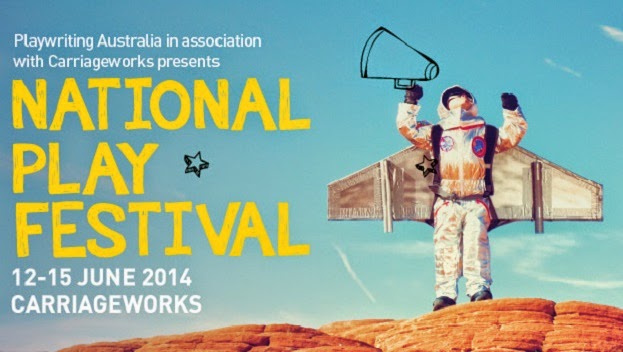 As I had mentioned at the end of my last blog, Dear Diary: The National Play Festival. A four day festival: 12th-15th June.

It began with a Keynote Address by Andrew Bovell entitled, HAROLD PINTER AT THE IVY. Here is a link to the speech and I thoroughly recommend that you read and/or watch it. Like the Harold Pinter Nobel Prize Lecture (2005), (which is also on google, and definitely worth knowing), Mr Bovell's speech is an impassioned, and ethically argued provocation to all the writers, artists, of Australia. A must for us all.

PLAYWRIGHT FOR PRESIDENT - Five playwrights were given the microphone to pitch "about one thing, big or small, that they would like to change to make the world - and as a result our art - better". Stephen Sewell, Angela Betzien, Michele Lee, Michael Gow and Tommy Murphy, chaired by Tim Roseman, spoke, discussed and answered questions from the panel and the audience.

IN THEIR WORDS, a panel of actors spoke of their experiences creating roles in new plays. Chaired by John McCallum, it included Kate Box, John Gaden, Leah Purcell and Dan Wylie.

There was also a special Playwrights' Program given:

I attended some of the Friday sessions.

Firstly, the PLAYWRIGHT FOR PRESIDENT, Public Talk, which was, in the experience of it, fundamentally disappointing, in the lack of vigilance, demonstrated by these writers, to seize the opportunity, to publicly speak out.

Mr Sewell did best with a broad choice of subject matter in his inimitable loaded 'comic' manner. He commented that in today's (political) world, satire has been eclipsed by real life. He touched on the Indigenous Question, and on the concept that Democracy was something more than leaders chosen by Media Barons - a concept, he thought, that may be a dangerous idea!

Angela Betzien, newly arrived to live in Sydney, from Melbourne, spoke extremely eloquently, armed with detailed statistics, about Housing Issues, both ownership and rental. As 'President' this would be at the top of her agenda for reform. Ms Betzien quoted Cuba as a possible role model, before more recent relaxation of civil codes, as a solution. The speech had the feeling of a very personal point-of-view, pre-occupation. That recent move to Sydney was clearly fraught (is still fraught ?) with housing difficulties, and seemed to overwhelm any other issue in her world view of need for change, as Australia's 'President'.

Michele Lee, as 'President' gave a very "I"-centred, need-to-entertain, comic list of 20 things, confusedly connected, I think, with vegetarianism! Hmmm ?!!! ( I recommend Ms Lee might attempt to find and read some G.B. Shaw pamphlets on vegetarianism).

Michael Gow gave a fairly subjective satirical list of reforms that, like his recent play, ONCE IN ROYAL DAVID'S CITY touched on the discomforts of living in our contemporary times, especially, it seemed, if you are an artist. All this 'President's' decrees would make life easier for some of us. It was amusing, for some, delivered for us, as I detected, with a kind of 'grand old man' of the theatre hauteur - wearied, but not, as yet, completely spent. Still, even now, present, on some field of 'battle'.  With a curmudgeon-like mask, of course.

Tommy Murphy gave up a fairly broad 'catholic' brush to his concerns as 'President', particularly, in pursuit of "fairness" in our present society. It did not have, in tone, a very 'pointy' thrust.

A discussion followed, dwelling on the idea of anger, social anger, as a fuel for writers, and whether the younger generation had much of it. We were assured that they had it, and that it did fuel them. One came away from the hour session, faintly amused, but, sincerely, longing for the confidence and passion that the inspiration of the Keynote Speaker, Andrew Bovell or Harold Pinter had given, in their opportunities. Both Mr Bovell and Mr Pinter would be my preferred Playwright for President - but, then, they did have more time to speak.

I, then, listened to a reading of MOTHS, by Michele Lee. I was particularly interested, as the play had been recommended to me after a performance of HIS MOTHER'S VOICE (by Justin Fleming), as a new play of interest, concerning the contemporary Australian-Asian experience. Mr Roseman, when he introduced the play, indicated, that as a text, it had had a most rigorous and significant recent development, (changes) during the preparation week. Certainly, the end result, using the 'play within a play' formula, was, mostly, a relatively confused melange of ideas and character. It seemed to have no 'spine' to its journey, and not really clear about what it was trying to say. Too much 'verbatim' source and not enough metamorphosing into a play text of clarity. As yet.

Next: SAMSON by Julia-Rose Lewis, has, sometimes, a poetic touch, and brings to us four young Australian teenagers in the turbulence of, maybe, their first grief of the loss of a friend. It captures some sense of the 'speak' of this Aussie generation but when compared to the work of fellow Australian, Lachlan Philpott, seems a trifle over 'genteel'/polite. Certainly, next to the muscularities of, say, Dennis Kelly, who writes of characters of a similar age, it is pallid, indeed, in all ways. Often character conversation/revelation is over-indulged at the expense of expedient and urgent storytelling. The audience, generally, was way ahead of the characters in story positioning and, frankly, the 'kids' are not that interesting - too familiar as types. However, Ms Lewis, has a 'poetic voice' that our theatre could have more of.

The program as you can see, ticked all the  correct 'cultural boxes' of our time's concerns, quite safely. Thank goodness for Mr Bovell. Still, a day well spent. The conversations between 'gigs' were great to have. Then, back to the Sydney Film Festival, and, at home, some books, fiction and non-fiction. Other portals of expressive means to help focus my response to the world about us in, often, more challenging ways than the theatre seems to want, able, to embrace, based on this one day experience at the National Play Festival.
Posted by Editor at 11:14 PM