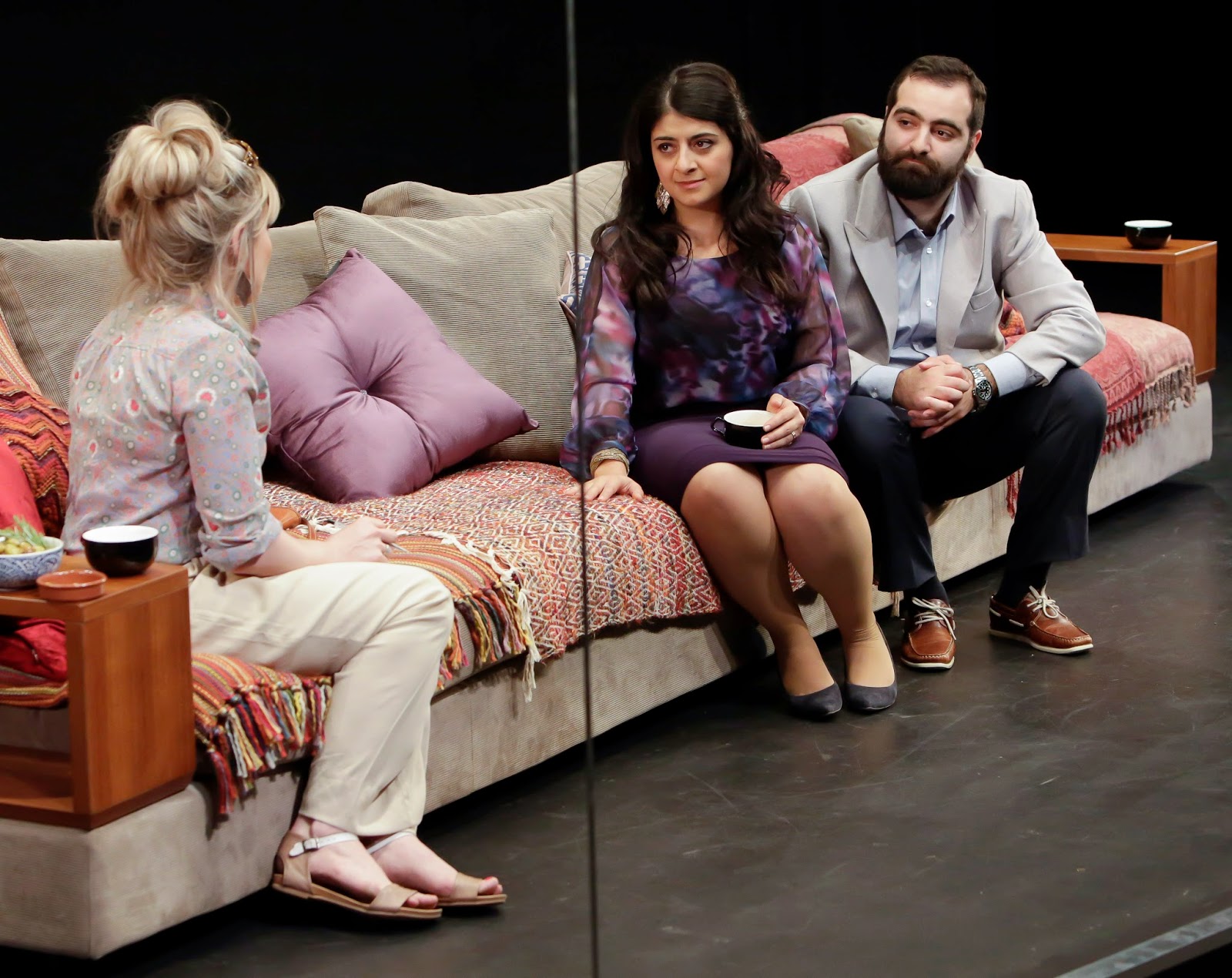 THE BOAT PEOPLE by Benedict Hardie. A Black Comedy. A co-production from The Hayloft Project and Rock Surfers Theatre Company at the Bondi Pavilion, Bondi Beach, 29th May - 21 June.

There is the glint of light on water - silver, gleaming (Lighting by Verity Hampson). A little later, standing high, in a glass bedecked apartment (Set Design by Michael Hankin), a woman of middle-eastern appearance, looks out mesmerised, by what is, possibly, an ocean view. She is disturbed? Bewitched? Unsettled? Perplexed? Disordered? Certainly, she looks pre-occupied.

Two food entrepreneurs, Sarah (Susie Youseff) and Karl (William Erimya), have built a chain of trendy and highly successful food restaurants in Australia, "Seraphina", and are about to launch into a new and daring development incorporating the local casino. What is of public interest, and the principal angle of the 'glory' of this success, is that both Sarah and Karl were once, not too long before, 'Boat People'. The profile of this sky-rocketing company has attracted the eye of the news magazines and newspapers, not only because of their culinary and financial success, but also because of the cheeky and non-politically correct techniques of selling their foods to attract their customers: using the social, emotional and political atmospheres about 'Boat People', brazenly (and, for some, insensitively), to coin some very provocative and arrestingly spun catch phrases, to create a menu and publicity text to excite that custom. There is, too, Sarah and Karl's charitable work in the world of refugees, a bonus public interest angle, to be sure, but, probably, of secondary concern. And whether it is the 15% of the margin of profit as claimed, or just 10%, becomes a cloud of contention during an interview with Melanie (Emily Rose Brennan), a journalist, at the luxurious beachside home of these two 'stars'. The product of this interview never eventuates, however, for a further storm cloud of concern, is raised when it is suggested that Sarah's boat story may have serious leaks of untruth! Melanie, we learn later, was hit with an 'avalanche' of lawyers to prevent any story, publishing.

A few years later, we meet Sarah as she launches a career into politics. Amending their differences, Melanie becomes the spin strategist for Sarah's election campaign, and they aim, deliciously, for the highest office in the land. The ultimate success for a Boat Person, it seems. (That two of our recent Prime Ministers arrived on these shores as children to Ten Pound 'Boat People' from the post-war United Kingdom, gives this story-telling, a not unlikely scenario.)

Benedict Hardie, the Writer and Director of this new work tells us:


.. I wrote a comedy. ... (and) As we near the end of rehearsals I vacillate between judging this play as very funny, timidly ambiguous, delightfully original, and flagrantly offensive. What I hope you will see is a satirical snapshot of Australia ... It is not a play about an issue, rather, it is a single narrative response to the society I live in."

Best that an audience discover their own impression of the work, themselves. I found it sometimes funny, not too ambiguous, kind of original, and not at all offensive - flagrant or otherwise. I did, however,  find it dramatic, and a little bit moving as well. And, what is commendable is that this play was written and staged, by an Australian writer and fellow artists, responding to important questions raised in the society they live in, in a state of ethical alarm - a relative rarity of the past year or so on our stages.

What Mr Hardie has written, undoubtedly, are two very powerful female characters, driving the drama and comedy of THE BOAT PEOPLE in a no-nonsense manner. Sarah's actions appear to be inspired by the traits of Connie Corleone, the Lady Macbeth figure of THE GODFATHER Part III saga: a shrewd manipulative business operator, who is totally appreciative of her good fortunes, in this case in landing in Australia, and the opportunities it offers. Melanie, a savvy career woman, finds she can adapt her skills and instincts to the aspirations of a grateful ex-refugee, and harnesses her energies to guide Sarah to the summit of power - it appears to be a tonic of pure testosterone for her. The men in the play are, relatively, ciphers, enamoured with Sarah. One, Karl, a closed off 'genius' at financial administration, too innocent to judge others, and probably a 'real' boat person; the other, Shane (Luke Joseph Ryan), a relaxed and comfortable sporty 'dumb-dumb' Aussie, ignorant of the 'good life' he was born into, and provide, in the play's writing, with the former, some emotional effects, and the latter, simplistic satirical highlights.

Ms Youseff creates a frighteningly determined individual as Sarah, and balances it with sophisticated undertows of vulnerabilities, and when playing with Ms Brennan's Melanie, who gives a well drawn arc of fierce ambition, creates an absorbing 'drama'. Both actors give highly admirable performances. The comedy, on the other hand, is mostly written in the writer's concepts of the male characters, and unfortunately, neither of the performers, Mr Erimya or Mr Ryan, have the ability to create and sustain characterisations of any comprehensible depth to match the women - no actor's instincts of insight of character depth, both preferring to be, and allowed to be, instead, simply show men. So, we have cardboard caricatures standing beside real characters, and there, is the weakness in this production: the comic shallowness, in the playing, of Karl and Shane. Mr Hardie does not seem to have the directing skills to solve the inadequacies of his casting.

In summary, Mr Hardie makes an impression as a fledgling writer of some interest. He does not make a similar impression with his directing skills. I, however, still, found the night intriguing, and one of promise. It is, with all its flaws, an interesting work for our times. It felt as if the artists behind THE BOAT PEOPLE were consciously alert to their responsibilities and opportunities as storytellers, in and for contemporary Australia, and were prepared to take risks to exercise that democratic right. That they (relatively) fail, was of little account, for me, after witnessing the trying misuse of the responsibilities and opportunities of Gogol's THE GOVERNMENT INSPECTOR as a springboard to create a new Australian work at Belvoir, last month.

Make an effort to see THE BOAT PEOPLE. It is, I believe, worth the effort to encourage these artists, with your support.
Posted by Editor at 11:09 PM