The Violent Outburst That Drew Me To You 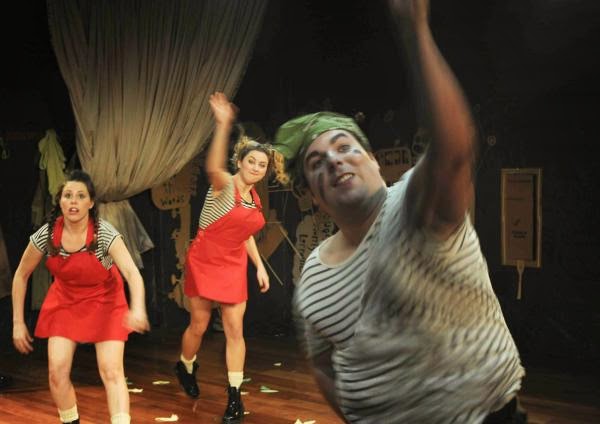 Siren Theatre Co and Griffin Independent, in association with InPlay Arts, present THE VIOLENT OUTBURST THAT DREW ME TO YOU by Finegan Kruckemeyer, at the SBW Stables Theatre, Kings Cross.

THE VIOLENT OUTBURST THAT DREW ME TO YOU by Finegan Kruckemeyer. Mr Kruckemeyer is a writer domiciled in Tasmania and has written some "70 commercial plays performed on five continents. ... In 2014, eighteen works are, or will be, presented in seven countries…", and this is the first play of his that I have seen! Most of his plays are written with children and young adults in mind - this is not an excuse of mine, just an explanation of my ignorance of an apparent, prolific Australian playwright. I had known of him before, had rumour of his work, but never seen his work. This is the second showing of this play in Sydney. THE VIOLENT OUTBURST THAT DREW ME TO YOU is a commission between Siren Theatre Co and Mudlark Theatre (Tasmania). The first production (2013) was supported by Riverside Theatres, out at Parramatta, through their visionary program, TRUE WEST - now, tragically, no longer funded, and so is, presently, defunct!

THE VIOLENT OUTBURST THAT DREW ME TO YOU is Directed by Kate Gaul, in a robust and delightfully resourceful, inventive and inspiring manner. Music, song, dance, shadow puppets, dazzling costume aesthetics, juggling props, and an energetic, clever company of five actors release the story of 16 year old, Connor (Michael Cutrupi) and his bad, bad humour. Connor is angry with everybody, everything - ANGRY, ANGRY, ANGRY - nobody, nothing can comfort him, and so bad is his temper, he resorts to physical violence, and knocks his best friend unconscious with a punch. His parents decide that he needs to find a way to cool down and take him to the forest to their shack, and supply him with food and equipment for a week, and leave him. In this forest he meets a young woman, Lotte (shared in performance by Emily Ayoub, Renee Heys, Natalia Ladyko). She, too, is angry, and is in an even worse place, temper-wise. Together, slowly, they begin to communicate, and begin to unravel their behaviour, or, at least, seem to.

Made for young adults this is a good place to be with your offsprings, it is an entertainment that can, should, provoke fruitful conversation between the generations. Mr Cutrupi gives a controlled but impressively robust performance as Connor - there is no sentimentality, there is no condescension, he is just an uncompromising "bad arse", that learns something about himself of value. The other performers, Ms Ayoub, Heys, Ladyko and Mr Anthony Weir create all of the other characters to serve his journey. They serve Ms Gaul, with a tight discipline, tirelessly, impeccably.

The bag of theatrical 'tricks' that Ms Gaul brings to the production of this play is full of magic and brio. Colour and Movement, Colour and more Movement, galore. Everybody of every age will find themselves distracted and immersed. The Music Score and Sound design by Daryl Wallis is especially beautiful, apt and core to the success of the work - the interplay of the music/sound integrated to the action of the players is impressive - a delight - and when harnessed to songs, and dance (Choreography by Ash Bee) is irresistible. The Lighting by Hartley T A Kemp, too, has individualistic presence, that brightens the stage pictures and 'tricks', highlighting the attractive Production Design of Jasmine Christie.

If all Mr Kruckemeyer's plays have this level of production and loving devotion, one can understand the reputation which has made him such an International success. For this production behoves some savvy writing for young audiences, indeed.

Ms Gaul, with recent outstanding work: THE NEW ELECTRIC BALLROOM and PENELOPE, pulls it off again with THE VIOLENT OUTBURST THAT DREW ME TO YOU. This production in as distinctive a departure in style from her other work, as anything you could have imagined, and such is it, that it draws from me - a hard-hearted adamant - a kind of open mouthed admiration, that's why I had that fun(ny) look on my face during most of the show - those sitting opposite could see it, and though hard to admit, also, a kind of tinge of 'jealousy' at her derring-do! Just what does what one have to do to get a 'gig' with one of the major companies in Sydney? It seems to me, just on the record of these three works, and there are others of note, that she knows what to do to get it working to serve the playwright and the audience.

Well, mine is not to reason why, I guess.
Just go and see for yourself. It is school holiday time, you can take the family..
Posted by Editor at 7:22 AM