Why Torture is Wrong, and The People Who Love Them 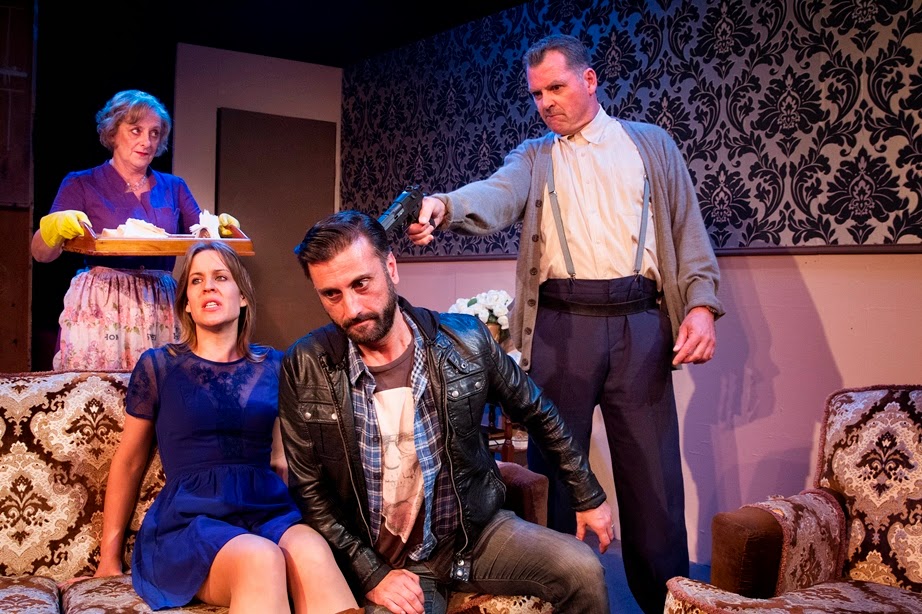 The New Theatre present WHY TORTURE IS WRONG, AND THE PEOPLE WHO LOVE THEM, by Christiopher Durang at the New Theatre, Newtown, 3rd - 28th June.

Luella, a mother, sweet, somewhat befuddled woman says somewhere in the comic chaos of Christopher Durang's, WHY TORTURE IS WRONG, AND THE PEOLPE WHO LOVE THEM:

"You know I don't really know what normal is. That's one of the reasons I go to the theatre. To learn that.  ... Normal. Its such a conundrum for me."

Go to the New Theatre and see if you can find normal. I dare you.

Christopher Durang is an American writer of, usually, outrageous and absurd comedies. In the Australian experience of his work, perhaps, SISTER MARY IGNATIUS EXPLAINS IT ALL FOR YOU (1979) might be the most familiar of his works. Although, on our University campuses, BEYOND THERAPY (1981) and LAUGHING WILD (1987) have made the stages fairly regularly, I remember. Last year, his play VANYA AND SONIA AND MASHA AND SPIKE won the 2013 Tony Award for Best Play - it starred Sigourney Weaver and David Hyde Pierce. The New Theatre are presenting WHY TORTURE IS WRONG, AND THE PEOPLE WHO LOVE THEM, which was first produced at the Public Theatre in New York, in 2009.

Mr Durang, like his fellow American writer, Nicky Silver - e.g. FAT MAN IN SKIRTS (1989) PTERODACTYLS (1993) and THE LYONS (2011), write with such a crazy vision and a sense of free association, that one can feel shell shocked or terrorised after the experience of watching (even reading them!) WHY TORTURE IS WRONG, AND THE PEOPLE WHO LOVE THEM, may have you believe that Mr Durang is, to use the title of one of his plays, Beyond Therapy - or, alternatively, his writing may be seen, experienced, by he and us, as a kind of therapy! Healthful and helpful, indeed!?

Here is the blurb from the New Theatre show card :


Felicity wakes after a drunken blackout to find she is married to a stranger called Zamir who makes Osama Bin Laden look like a moderate.

Now weather that, and you might feel at the end of it, in more than a little bit of agitated psychic 'turmoil'. One of my friend's in the audience mentioned to me that she could hardly wait to get a copy of the play so that she could underline the many, many social issues (comments) touched on by Mr Durang during this hectic evening - she is, by the way, one of the surviving members of the New Theatre's stalwart 'social revolutionaries' of the 1950's-60's, - a Communist even - and so was thrilled with the subject matters of this play. It is, says the Show Card: "A provocative and hilarious satire on the cults of violence and paranoia generated by the twisted logic at the heart of the US 'War on Terror'." The Variety review is quoted: "Comedic napalm ... unnervingly true and cathartic." One does wonder if the play is too much for our comatose Australian audiences to comprehend, too US centred (New York centred) , too American for us to absorb, but, I felt , along with my friend, perhaps, in the present miasmas of our own government's projected programs and retreats, maybe, just maybe, it has some referencing pertinences.

Whatever! The Director, Melita Rowston, has bravely chosen and tackled this work, and she has found a way through the 'free associations' of the writing, and it is clever, both in content and in form, to keep us all, for most of the time, on board. Certainly, she has managed her company of actors very well indeed, and they all give sterling, focused and concentrated service to the work. It would not be an easy task. Ainslie McGlynn and Terry Karabelas, right from the beginning, find the right balance of truth and mayhem to the characters they play, Felicity and Zamir, and maintain them, steadfastly, throughout, to give us, the audience, a firm rudder, a map, to guide us through the thickets of the satiric targets and forays into writerly time games. Two comic gems, from different modes of style, Peter Astridge as a frightening cartoon of frenzied ideologically driven madness, Leonard, the father figure; and the stylistically grounded 'illness' of a non-coping, ultimately, comically pathetic mother figure, Luella, played by Alice Livingstone, delight one throughout. Each, in their text demanded manner, providing comedy of a highly sophisticated kind. Mr Durang reminds us that the "War on Terror" can begin at home with every family, not just Over There! Add Romy Bartz's turn with falling underwear, exquisitely timed, plus the contributions of Ryan Gibson, and Annie Schofield (though, her Looney Tunes characterisation could have some more clarity), and a good and provocative time can be had, if, a trifle exhausting, by the end.

The play finishes with the voice of the Maitre'd singing:

as the three couples dance together into the diminishing light.

In the current State and Federal political and social landscape, do I feel as if I am dancing in the dark? Maybe. Certainly I can feel as zany as some of the characters in Mr Durang's play. Which one, I won't confess too, even under torture. Mr Durang in his Introduction to the published collected works, WHY TORTURE IS WRONG, AND THE PEOPLE WHO LOVE THEM and Other Politcal Plays (Grove Press, New York - 2012) says:

I had great fun writing it (this play), and I feel it is ebullient rather than angry or depressing.  It is definitely a political play.

WHY TORTURE IS WRONG, AND THE PEOPLE WHO LOVE THEM by Christopher Durang, at the New Theatre is, for those of us who like our theatre to be intellectually arresting (challenging), as well as entertaining,(and while we wait for our Australian playwrights to find their voices beyond the bedroom and sex), worth catching, even with this production's flaws (especially, the visual ones!) Us beggars can't be choosers.

Meanwhile, at the Bondi Pavilion THE BOAT PEOPLE is a new Australian play of some (small) 'spine' and is, too, worth catching, if the above attracts your interest.

And by the way, this week, 12th-15th June, Playwriting Australia are presenting the NATIONAL PLAY FESTIVAL at Carriageworks. It might be worth a look at, just to observe what our writers are writing about. Bleak times, historically, so they tell me, are often times of artistic flourishings. One can only hope.
Posted by Editor at 11:31 PM