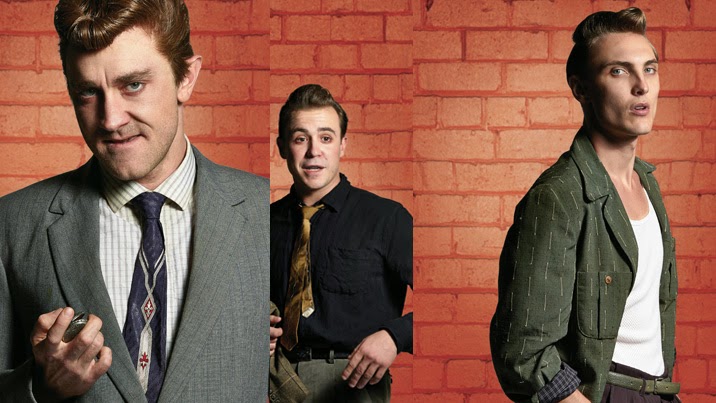 MOJO by Jez Butterworth, first presented at the Royal Court Theatre, in 1995, has had a recent revival at the Harold Pinter Theatre, in London's West End. When first presented, the play was received as a high octane cocktail of testosterone - of equal combinations of sex, drugs and rock-and-roll. It won some theatre prizes. Set in a seedy, struggling nightclub in the Soho sleaze of the late nineteen fifties, the overture to the 'swinging London' fame of yore, perhaps, taking inspiration from the world of the notorious Kray Brothers gang, and their famous club, Esmeralda's Barn, this Atlantic Club, run by Mickey, comes under stress when the other co-runner, Ezra, is found sawn in half, in some barrels in the alley behind the club, and the lead singer of the club's fledgling rock 'n roll band is missing (kidnapped?).

Panic, of gathering degrees, fed by fear and the exaggerations of drugs and alcohol, becomes the focus of the plot of the play. Potts (Josh McConville), Sweets (Ben O'Toole) and Skinny (Eamon Farren), under the guidance of Mickey (Tony Martin), attempt to salvage advantage in the dire circumstances, and slowly become aware of a surprising obstacle, opposition, from one of their own, Baby (Lindsay Farris), who happens to be the son of the dead Ezra, with his slow reveal of the 'possession' of the recaptured sybarite rock star, Silver Johnny (Jeremy Davidson), who they have been grooming as their 'honeypot' for cash and fame.

Mr Butterworth, in this first play of his, reveals his strong literary influence, Harold Pinter, in the content and structure of the work (Pinter actually appeared in a small role in the film of MOJO, directed by the writer in 1997). One can feel the influence of the Pinter early work, particularly: THE DUMB WAITER (1959), THE CARETAKER (1960), THE HOMECOMING (1965), as MOJO reveals its tense comedy and mounting sinister-isms. Suggestion and wordplay, space and speed, in the syntactical complications of the language, are expertly laid out for any production team to decipher and deliver.

Iain Sinclair, the Director of this production, brings Silver Johnny onto the stage to open the show with a rock 'n roll performance (by Jeremy Davidson, and his band the Snowdroppers). This is not how Mr Butterworth's play begins, and it may have been a mis-step on Mr Sinclair's part, for the growing stakes of this story is centred around the charismatic 'talents' of Silver Johnny, and, in the original play, we hear only the final moments, off-stage of the band, and are left with the power of our imagination as to the potential of the talent and sex appeal that causes such havoc and bloody deeds. The Snowdroppers and Mr Davidson, and his relative maturity, are not, possibly, equal to everyone's fantasy of youthful potential (this band was introduced to us as a stage presence in another Sinclair production: KILLER JOE, and must be a favourite of his, for him to bring them in from backstage to centre stage at the STC - the percussionist, Alon Ilsar, has a central role in noisemaking to build the tensions of the story plotting.)

The Set design (Pip Runciman), Costume (David Fleischer) and, especially, the wigs (Lauren A. Proietti) create an atmospheric reality of this past world.

However, what became clear, transpired, in the playing of this production, by this fine team of actors, was on one hand, the creation of totally believable characters, but, on the other hand, no real connection to the parallel attention to the actors' craft, in using the text as 'storytellers', to shape, with objective craft, the mounting and hilarious guide points that the writer has signalled, to tell that story. The directorial guidance to allow the material to score its comedy and to mount the malignant pressures, seemed to be ignored for speed, without relaxed opportunities (thought moments) for the audience to respond, or endow the developments with imaginative inspirations. We were told to 'look' at the play, not invited to 'read' the play for clues so that we could imaginatively participate in it. The disappointment in this production, that I saw late in its season, is surely, partly, the result of the late replacement of the actor Sam Haft with a younger performer, Lindsay Farris, who bravely makes an impression as a psychopathic Baby, but lacks the necessary weighty, present menace of the character, to establish, early in the play, the sensibilities necessary to raise the incidents of the play to the final Jacobean-like horrors - an agonising 'live' spillage of pints and pints of blood, to be, totally, plausible (although, well staged.) Too, the musical rhythms-tempos of this team of actors must have been terrifically altered by the new energy of a very different actor in this key role - although, by the time I saw the production, one could have expected more.

Mr Martin is very effective as Mickey, as is Mr Farren, with a fairly detailed creation of Skinny. Mr McConville has limited success with Potts, best as character, not so successful as the storyteller of the earliest sequences of the play. Perhaps, Mr O'Toole's Sweets, not quite on the demarcated 'ball' of difference in characterisation, is part causal of that  unusual disconnect of Mr McConville's.

So, this production whizzes through the play with some style but not enough thoughtful substance, and there is, if you read the text, in the playwriting, some (little) substance to this play, as well as that style. But, such is the imbalance to flash and dazzle in this production, that many critics and patrons have asked why do this play, at all, as part of the STC repertoire? What relevance has it to a Sydney audience in 2014? Why does Mr Sinclair, or, Mr Upton, believe a group of English low-life punks in a bloody orgy of drugs, sex and grunge in London, in the 1950's would be of delight or interest to a Sydney audience? Australia's appetite for TV's UNDERBELLY?

For, certainly, as demonstrated at the amateur New Theatre, last year, Mr Butterworth has moved onto bigger and better, even universal relevancies: JERUSALEM, for instance. MOJO has had a production here in Sydney before, so why not a production of a more important play of great critical acclaim staged by the leading and best financed Theatre Company in Australia: the STC, such as JERUSALEM? (The leading role, Rooster, one that Richard Roxburgh, a stalwart of the STC, for example, would 'eat' up). Is it just that Mr Upton, who had never read MOJO (some 19 years, after its first famous debut in London) - just "only heard about it" - until Mr Sinclair, "not a man to say no to", according to the program notes, has not, also, read JERUSALEM? Or, is it that one play has a cast of 6 while the other a cast of 14 (I won't tell you which has which! Guess.) - is too big an economic 'problem' for the STC, the leading Sydney theatre company, to consider? It is a constant wonder, is it not, to see the number of actors taking curtain calls on the stages of London that we witness on those Broadcasts to some of our cinemas? How paltry are the companies of the Sydney Theatre productions, eh? Or , Belvoir?

For those of you looking for thrills of a similar order to this MOJO's premise and structure, style, perhaps, Tarantino's RESERVOIR DOGS (1992) - maybe, another influence to Mr Butterworth's MOJO - or, his PULP FICTION (1994). Or, if you want to keep that British taste, though it will be a matter of taste (really), pull out Guy Ritchie's LOCK, STOCK AND TWO SMOKING BARRELS (1995), or SNATCH (2000), or, ROCKNROLLA (2008). If you want a really more contemporary play of the type - gothic-horror grunge - perhaps a read of THE PITCHFORK DISNEY (1991), MERCURY FUR (2005), or PIRAHNA HEIGHTS by Philip Ridley might suffice.

All of these will cost far less than the cost of a ticket to the STC to see MOJO. I paid $99.00, plus, $10.00 for program. Total=$109.00 !!! Add, transport, for who of us real theatre goers have an Audi, or risk the parking costs/fines? There is no other public transport out of there, but a taxi! - some, $40.00 to my place, after 10pm. Ah well, all you subscribers know that, down at that HUB of ART - you need to be almost a millionaire to go there regularly. Add some dinner.  Maybe, another $40.00. What, a night out at the theatre = $189.00? Lucky, I went alone, I couldn't afford a date. It cost me more to see MOJO than THE GLASSS MENAGERIE in New York! Is that why most of the audience, in Wharf 1 were in the middle-aged and older bracket? No youth could afford the ticket. And who might be most likely attracted to this gothic rock 'n roll grunge show?

Q. "Why did you go then, Kevin, despite your prior knowledge as to the disputed qualities of this production, and the likely cost, that you had gathered from informants, critics, friends and the underground 'gossip' machine?

A. "Because, I love the theatre and want to support it. I liked the casting and was interested in the play  (mostly, because of the interesting reviews of the latest London production).

A deep sigh.
Rattle of coins in pocket.