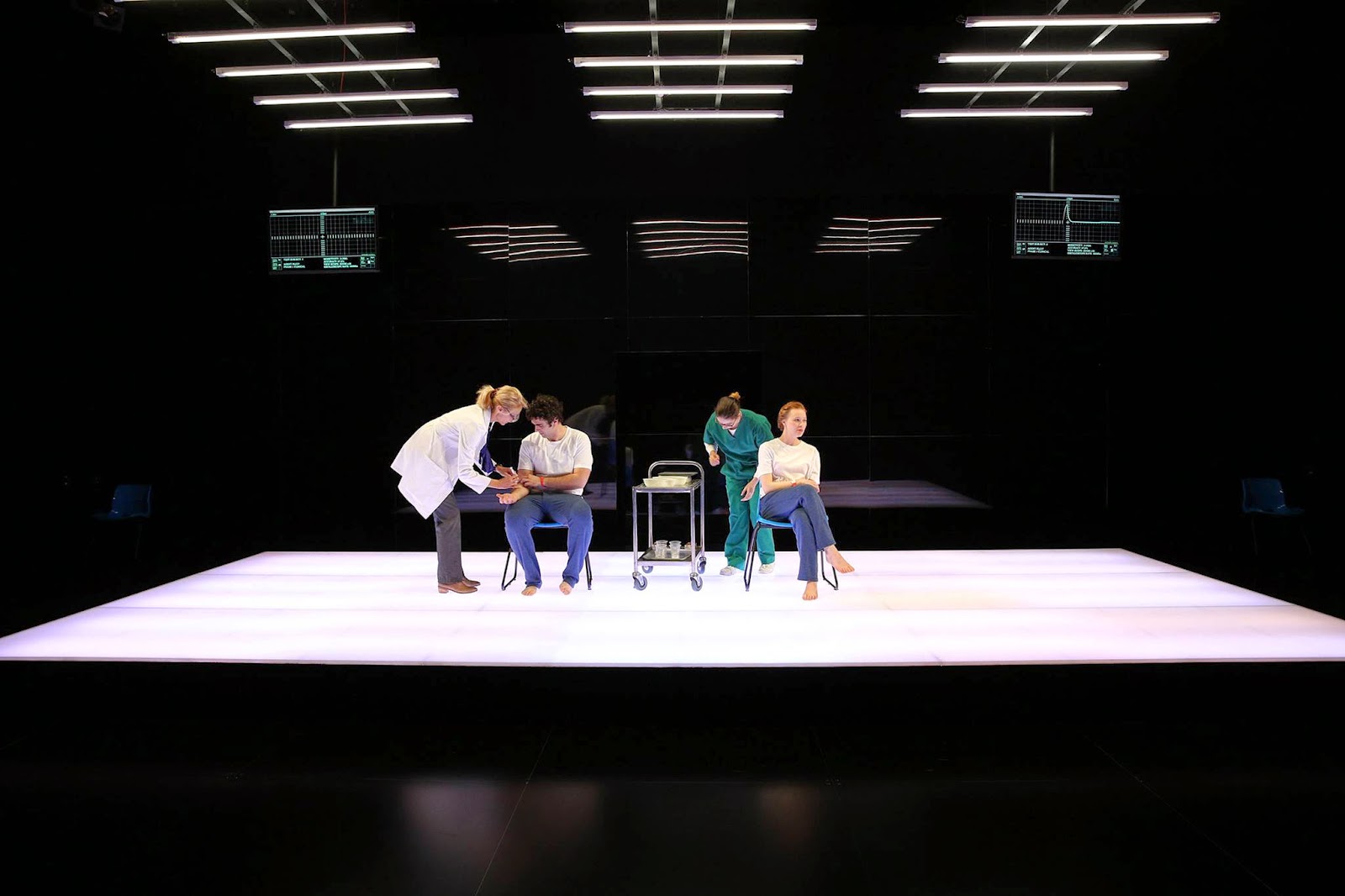 THE EFFECT, by Lucy Prebbles, I first saw in the original production at the National Theatre, London, in 2012. I have written about it. I, also, was fortunate to catch the ill fated Broadway production of ENRON (2010) also by Lucy Prebbles. Both these plays are challenging examinations in the theatre of very big issues. ENRON has been seen in Sydney at the enterprising New Theatre. The Sydney production of THE EFFECT has been sponsored by The Commonwealth Bank - one can ponder why they didn't agree to sponsor the ENRON play, too - too big to fail! Both these plays are highly researched, and then were organised, to have clarity as debate, and entertainment, by the writer and her present Director of Preference: Rupert Goold, and his company, Headlong. Both ENRON and THE EFFECT were extraordinarily exciting nights in the theatre.

THE EFFECT grapples with the issue of our scientific knowledge of the Brain and how it functions - just how much do we know about that vast 'universe' of the human, that is crammed into our skull? (What a piece of work is man.) It grapples with the contemporary phenomenon of depression - the STC program notes reveals that


in 2013, the Organisation for Economic Co-operation and Development (OECD) released a report on the health of its 33 member countries. Australia ranked second behind Iceland as the highest prescriber of anti depressants.

So, this play has urgent relevance for us, I reckon. It grapples with the ethics and practice of scientific research in our large pharmaceutical corporations


at the University of Sydney's School of Psychology, in their published findings, they note that 'antidepressants are the most commonly prescribed psychotropic drugs, yet studies suggest that may have only marginal benefit over placebo in mild to moderate depression and may have paradoxical psychiatric side effects, particularly in children and young adults.

This is countered, if one reads more widely into the state of affairs in a 2012 report from the University of Chicago's Department of Medicine, published in the Archives of General Psychiatry. In their research, a longitudinal meta-analysis of several large studies, they found that 'severity was not significantly related to degree of treatment advantage over placebo'. In other words, their results did not support the previous findings that antidepressants show little benefit except for severe depression.

In the UK two opposing views were recently published in The British Medical Journal. So, that this is a subject matter of important contemporary instance, there is no doubt (how arresting was it to read in Thursday's, the 24th July issue of the Sydney Morning Herald (P3):


Paracetemol has been found to be no more effective for back pain than a placebo, a study has found. The findings contradict the first line recommendation of doctors for managing back pain and the packaging advice of paracetemol manufacturers. ... The annual medical bill for back pain is $4.8 billion, according to Arthritis and Osteoporosis Victoria.

THE EFFECT, finally, also, grapples with one more important and incessant human experience/concept: LOVE. What is love?

What was outstanding in the National Theatre production was the thrill of the debate between the characters of the play (only 4) about these matters. In the interval one was wrapped in conversation about where this play was taking one, and the startling intellectual questions and moral boundaries it demarcated. After the play this debate continued, fiercely combusted, by the play material/text, that demanded one to deliberate. The audience's head was provoked, the heart was stirred. BOTH. The production kept a rigorous measure between those two elements of the writing. Each was balanced and each was integrated. Lamentably, this STC/QTC production 'milks' the heart and barely stirs the head.

For me, THE EFFECT, directed by Sarah Goodes, erred in interpretative emphasis, by seeming to stress, indulgently, the heart/melodrama of the characters' dilemmas - the relative 'sugar coating' of the intent of the play - over the intellectual grappling, debates, that Ms Prebbles had cast before us. Ms Goodes has encouraged her actors, Anna McGahan, as Connie, (quite a deal of distracting facial characteristics- 'tics' - to indicate emotional states) and Mark Leonard Winter, as Tristan, to focus on their roles as tortured 'lovers' (having, as in Tristan and Isolda taken some magic potions, perhaps?!)' so that in the final sections of this production, they, simply, became figures of drug 'victimisation' and social martyrdom, over and above the need to also wrestle, as the 'storytellers' of this play, for the audience's sake, with the posed questions and debate, so cleverly integrated by the writer in her quest for public attention to her core subject concerns. Angie Milliken, as Dr James, gives the clearest balance to her tasks at hand, as the moral dilemmas that her character is faced with are presented in clear, cool intellectual clarity of action, accompanied by a graually revealed human 'heart' emotive in the character's personal journey and struggle with the illness of depression. Eugene Gilfedder as Toby, is only moderately interesting with the 'science ' and the pharmaceutical corporation shades of the play, and tends to appear to be more comfortable with the the melodrama of the emotive stakes.

This production designed in cool colours and reflective gleam to facilitate a subliminal interrogatory feel by Renee Mulder, lacks the further details of furnishings to involve us in the physical journey of the characters, and the Video Design (David Bergman and Renee Mulder) seems to be under prepared in its clinical assistances to keep the audience informed and involved with the intriguing 'medical' elements/evidence of the play's major 'machinery: the clinical trial of drug effectiveness.

THE EFFECT, in Wharf 1, is only partly realised, and is never more than adequate to the play's potential. It is a shame, for this play by Ms Prebbles is timely, and when fully expurgated, is a provocative scourge to one's under-questioned complacencies around the connections between scientific research and big business, and to our continued struggle with the 'calls' of Eros in our human interactions.