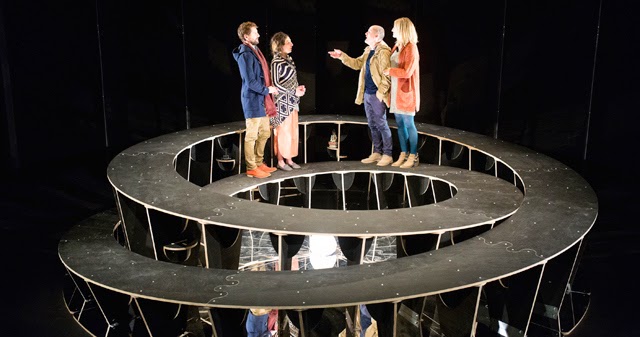 In June, 2010, the Writer/Director double of Vanessa Bates and Shannon Murphy brought us PORN.CAKE, and have now collaborated to present a new play: EVERY SECOND. PORN.CAKE was a comic 'meringue', its success benefitting enormously from the energy that can be combusted  around and in the small space of the SBW Stables - it was able, in there, to be comically fun and seductive, (durable) despite the slightness of the content pre-occupation. EVERY SECOND has had its premiere production, in Sydney, in the new, much more open, proscenium arch design, of the 200 seat, Eternity Playhouse. This play and production, then, in this much larger space does not, unfortunately, seduce us quite so easily, if at all.

EVERY SECOND concerns itself with two married couples who make close acquaintance during the trauma of IVF treatment. Jen (Georgina Symes) and Bill (Glen Hazeldine), a couple in their early to mid forties, and Meg (Julia Ohannessian) and Bill (Simon Corfield), in their mid-to-late thirties, who have turned to the miracles of medical science to have a baby, their own nature driven biological resources not having been able to create one. One couple succeeds (with twins) and the other, not.

The traumas of this modern medical intervention, are the background to Ms Bates' play, which is rather, preoccupied and passionately interested in a kind of comic burlesquing - verbal and physical - of the realities of the complicated psychic and physical trials and tribulations (humiliations, indignities) of the medical intrusions and methods of IVF treatment, for a certain privileged class of Australians.

We watch a couple, twice, demonstrably, lengthily, (comically?) have sexual intercourse, (with side comments about his mother, spoiling the action!) in the pursuit of the fertilizing of an egg with sperm; we, even, are treated to a dance diversion, a ballet of the battle of the sperm, the actors in costumes, by Rita Carmody, reminiscent of Woody Allen's 1972 film, EVERYTHING YOU ALWAYS WANTED TO KNOW ABOUT SEX BUT WERE AFRAID TO ASK, in their race to scoring a bulls eye with an egg, choreographed by Sam Chester, to a mock ballet score treatment, by Composer/Sound Designer, Tiernan Cross. Indeed, Mr Cross' score is a useful provocation (of a film score density) to the lightweight TV sit-com nature of the material - it does much to permit the audience to endure the 'fluffy' treatment around some of the serious modern experiences of IVF patients: infidelity, a marriage crack-up and re-approachment, a night club 'rampage', a debate around the acquiring of a dog or cat as a stand-by substitute whilst waiting for the medical 'miracle', with just the right pertinent jokey tone of tongue-firmly-in-cheek - very TV's MODERN FAMILY, I thought.

However, whether the set design, of what looked like a homage, token, to the post revolutionary set design of the Russian Constructivists (particularly, Viktor Shestakov) - a movement that asserted that 'the machine is more like an animate object organism ... (that) today's machines are far more alive than the people who build them' (1) - an ironic design statement about the mechanical 'tools' of artificial insemination, perhaps? from Designer, Andy McDonell - with his stunted wooden spirals mirrored on the Eternity Theatre stage, is useful or not to the fluid movement of the actors in the production, is debatable.  (Certainly, these actors proved themselves very agile in the darkness). Verity Hampson, works with the complications of this design and solves admirably, the necessary task of focusing the lighting, for the audiences to attend to the action of the actors in the otherwise wide open space of this theatre.

I saw this production at its penultimate performance. Mr Hazeldine, as usual, gave a sophisticated and detailed reading of his responsibilities, and despite his relatively underwritten role, and the comic tone  of the direction by Ms Murphy - entertain the audience at all other costs - still emanated a kind of sad truth to Bill's position. His craft skills measured the theatre requirements and shaped the effort to communicate the 'clues' of his performance well. What the other actors, generally lacked, was a consistent vocal energy dynamic, and clear physical offers, for comic communication, or otherwise, to consistently arrest our attention. It was difficult to attend to them, care for them, as they played  as if they were performing for a television camera instead of in a large theatre. No real precision of consistent craft going on. Dull. However, to be fair, the play did score some sporadic laughter on the night I saw it - the reference to Zumba dance classes scoring the loudest response!

I pondered, during the performance, as I tired of the experience, what the opportunity this subject matter offered, albeit, to a fairly limited audience concern - the rich, comfortable middle-class, who deserve  to have whatever they want because they can. I DESERVE IT, DARLING. Ms Murphy quotes from Philip Seymour Hoffman, "We have to get personal with each other, its about you and me, our stuff, our stories ... because we're talking about life, and we're trying to make art out of that life, we're trying to get at the truth of something, of each other." Well, of a few of us at least: "one in thirty three children are IVF babies, in Australia."

I was curious, then :
Talking to a friend recently, I mentioned young British writers that write of contemporary issues - in both comic and serious mode:
Lucy Prebble - ENRON and THE EFFECT.
Lucy Kirkwood - CHIMERICA (The Olivier Award for Best New Play, 2013).
Mike Bartlett - COCK, EARTHQUAKES IN LONDON, KING CHARLES III.
Nick Payne - THE SAME DEEP WATER AS ME, CONSTELLATIONS, INCOGNITO.
and I wondered, where are the equivalent Australian writers of similar quality?

Do they exist? Are they around?

Vanessa Bates has undoubted talent, but dramaturgically, for me, seems to produce work of little content sophistication. Are our playwrights simply reflecting their audiences demands? Or, director's tastes, or ...... what? I am, honestly, frankly bewildered. So much navel gazing going on in our theatres with our writers and directors, artistic 'gate keepers' - no outward gaze onto/into the real world. Thank goodness I have access to a good theatre library - I know the art form lives!!!! Even thrives.
Elsewhere, alack.
Oh, well!
Mine is not to reason why, I guess.
Grin and bear/bare it.