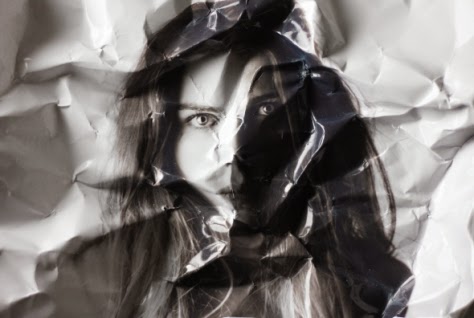 GRUESOME PLAYGROUND INJURIES (October, 2009), by American playwright, Rajiv Joseph is the third play of The King Collective Sydney Fringe 2014, contribution. It is written for two characters: Kayleen (Megan McGlinchey) and Doug (Aaron Glenane), and spread over the course of thirty years, from their age of 8 to 38, in eight scenes, but not in chronological order. We observe them flitting in and out of each others lives at key moments of physical distress. Both, Kayleen and Doug, have a propensity for physical injury, sometimes accidental, sometimes inevitable, and sometimes self-inflicted - signs to express, perhaps, metaphorically, for us, vulnerability. I say, perhaps, for the writing, although, sensitive, sometimes delicate, lacked consistent dramatic development, narrative or clear motivation of the character's behaviours in this production. Maybe, the 'card-shuffle' chronology of the scenes, skipping back and forth over/in time, did not assist me to understand the journey, or dramatic point of the play, easily?


All the transitions between the scenes should be done by the actors, and their changing of the scene should be leisurely. Costume changes should occur on the stage. There is no need to hide any of this work from the audience. We should especially see Doug's dressing of his wounds, or the application of the necessary make-up that represents his injuries. The lengths of the transitions signify and allow for large passages of time in the lives of the characters. ...

Since, in the traverse-styled staging of this production, by Anthony Gooley, these costume and make-up transitions were staged in the opposite off-stage corners of the space, and not always visible for all the audience, and not dramatically lit to guide our attention, to read for dramatic meaning - they became, for me,then, interludes to endure, instead of an integrated part of the dramatic storytelling construct. Mr Gooley, and his actors needed to spend more time in choreographing these long scene change processes, for in action they were, indeed, only "leisurely" - painfully leisurely, despite the sometimes witty musical accompaniment. This play, as written, has eight scenes of vocal interaction, and then seven purposeful scenes of choreographed costume and make-up mime to 'indicate' "the passage of time in the lives of the characters". (In this production, nine costume changes, adding the scene one prior dressing, and end of play, part, undressing). Both demands did not have the same attention. The play is only some 90 minutes long without interval, and became a feat of extended time endurance - it felt longer than it was. (One ended by inventing background lives for some of the audience seated opposite, while one waited).

Mr Glenane has an innate sense of spontaneity, and is equipped with a highly physical and quirky, impulsive energy, that demanded our empathetic attention. Doug was a puzzle but authentic - alive. His mental and physical progression to deterioration over time was at least slightly demarcated. Whilst, Ms McGlinchey, on the other hand, gave us sincere, but, studied actor's craftsmanship, all expert externals, full of contrived actor's characteristics - 'tics' - for her Kayleen, and failed to motivate the action of her story to reveal the sub-textual justifications of the events of the play - and though, having a good timbre to the voice, lacked a vocally expressive range to detail her character's journey: from scene to scene it sounded the same with no tonal developments to the possible dramatic variations of the scenes. Whether, aged 8 or 38, over the 30 year arc of the play's journey, McGlinchey sounded and moved like a youngish 24 year old - the only concession to difference, and not including the 'gruesome' physical and mental injuries incurred from scene to scene, as an actor at work, was the costume changes! The work had no forward energy, or accumulation of crafted storytelling awareness, it being focused, rather, on a generalised 'psychological'character impression, rather than character revealed through action and time. For me, Ms McGlinchey was far more present than any transcendence to the experience of the life force that was Kayleen. Repetitive, from scene to scene.

Rajiv Joseph was nominated for the 2010 Pulitzer Prize for his play BENGAL TIGER AT THE BAGDAD ZOO (May, 2009), starring on Broadway, Robin Williams. This was despite, thoroughly mixed critical reviews. NEXT TO NORMAL, (soon to be seen at the Hayes Theatre - January) - won the Prize that year, controversially - it's form, a musical was the issue, not its dramatic power.

The King Collective artistic support team for this production: Tyler Hawkins for Design - Set and costume. Lighting by Toby Knyvett. Sound Design by David Stalley, David Couri and Philip Orr, had an integrity of vision that was a positive asset to the production. Mr Gooley made a, generally, impressive debut as Director of this production. Having seen two of the three offers of this Collective, the other being, THIS IS OUR YOUTH, it seems to me that they have demonstrated a clear integrity, considered artistic strategies, and a sense of mission that excites one to anticipate their future work. Well done.

It is a marvellous thing to have the Tap Gallery in Sydney, to permit such adventuresome ambition to be presented. Well done, too - always room for improvement no doubt, for any of us who have worked there, attended there, but, in the meantime, an indispensable 'icon' of opportunity, for the fledgling lives of some of our young, and experienced artists, looking for spaces to maintain practice and exposure.
Posted by Editor at 9:31 PM